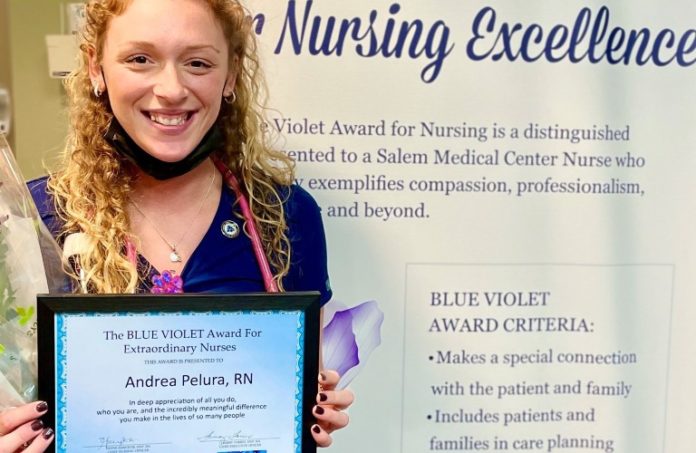 Wright, of Carneys Point, was playing in a corn hole tournament at Sakima Country Club when he experienced a massive cardiac arrest. A fellow player grabbed the Automated External Defibrillators and began shocking him, but Pelura, who was in attendance, knew he needed chest compressions.

“I started to feel myself go into A-fib and I got dizzy,” Wright said. When he attempted to sit down, he missed the chair and fell to the ground as he went into cardiac arrest.

“I dropped my coffee and ran to him,” Pelura said.

Wright — a former Carneys Point police officer and Salem County Correctional Facility deputy warden — was told the nurse “knocked” the person using the AED out of the way and took over with chest compressions.

“They said I had no pulse for one minute and 45 seconds,” Wright said. “I’m here today because of her. She saved my life. She’s my angel.”

Wright’s doctor said that, if Pelura hadn’t massaged his heart with the chest compressions, he would have died.

“She never hesitated,” he said. “I’ve actually known her since Day One. We’re family friends. I can’t wait to see where she goes in her nursing career. She’s going to do great things.”

Wright has a history of cardiac issues and regularly works out in SMC’s Cardiac Rehab facility. He saw the Blue Violet Award banner during one of his visits and asked how he could nominate Pelura for the recognition.

She is the first winner nominated by a patient since the program began in May.