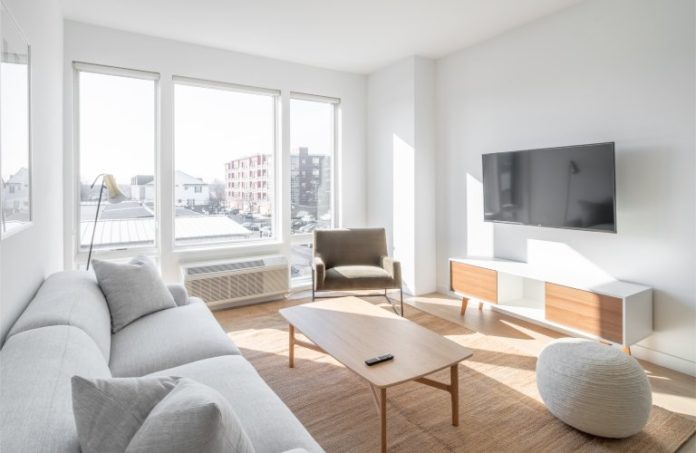 The coworking concept for business has been around for years. So, perhaps it only makes sense that such a setup would come to residential apartment living.

This week in Jersey City, Common (along with Fields Grade and Blumberg & Freilich) announced it has begun leasing 20 co-living apartments — featuring 80 for-rent units — at the Agnes, a Class A building at 132 Yale Ave. that features an arts and culture-based theme.

The co-living concept is designed to provide a nicer, bigger (and cheaper) setup than a traditional studio apartment, albeit one with roommates.

Twenty apartments with four private bedrooms and three bathrooms are available for individuals at the Agnes. All units:

Common officials say the rent is 15% lower than a market-rate studio. Rents start at $1,375 with increases based on unit size, view and en-suite bathroom. The average rent is just under $1,500.

Common, based in New York City, has introduced the concept in 12 cities in the U.S. (including New York and Philadelphia) and has more than 7,000 current tenants. It has more than 22,000 units (in 22 cities across the globe) under development.

Greg Russo, a principal with Fields Grade, said his firm was eager to partner with Common and bring the concept to New Jersey.

“Home sharing has become an appealing option for some renters,” he said. “By aligning with Common, we’re able to provide this alternative on a select group of apartments within the community while ensuring management standards are met for the benefit of all of our residents.”

The Agnes, which has 233 rental apartments, has been leasing for months. The project’s first phase of 145 apartments opened to the public in early 2021 and was quickly leased up. In October, 68 additional apartments were rolled out. They are 80% leased.

The Agnes, which opened in early 2021, features a number of top amenities, including complimentary shuttle service to the Journal Square PATH Station.

Common members living at the Agnes also will have access to the community’s 10,000-plus square feet of amenities, which include an outdoor pool and landscaped courtyard, club room and workspace, communal kitchen, cafe and art and design library.

Common founder and CEO Brad Hargreaves said all of this made the Agnes the perfect place to introduce the concept in New Jersey.

“Fields Grade is a like-minded partner focused on bringing sought-after housing to communities, like Common,” he said. “With extensive experience managing in the New York City area, Jersey City is a natural extension for Common’s co-living offering.”

Here’s the answer to the big question: What happens if you don’t get along with your roommates?

Residents cannot get out of their lease, but they can move to another suite-like apartment in the building or another building run by Common.