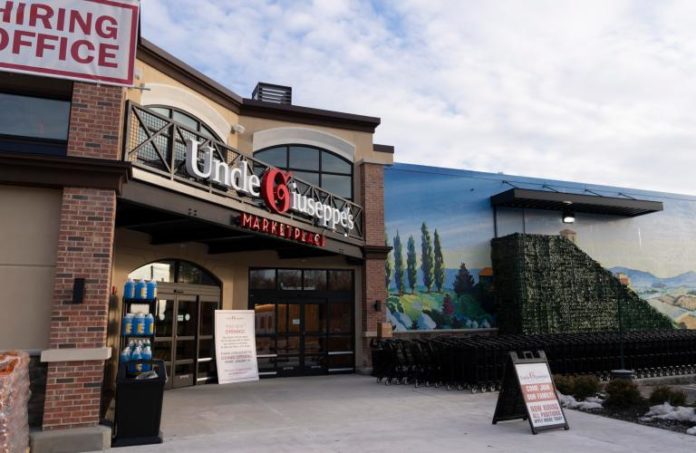 Vinnie Olivieri, the director of culinary for Uncle Giuseppe’s Marketplace, rattles off the varieties of chicken cutlets offered as quickly as they go from the behind the counter at the company’s new location in Morris Plains.

Olivieri explains how the company sells more cutlets than any of its competitors. He talks about the state-of-the-art equipment that allows the chefs to produce perfectly sliced cutlets every time. And he brags about all the freshly prepared sauces that can go with them: vodka, Bolognese, Alfredo, marsala, marinara, fra’ diavolo, basil pesto and a host of others.

“These are all made daily right in the store,” he starts in. “This is not jarred stuff. This is not frozen-in-a-pouch, packed-away-into-a-container sauce. These are sauces that are made fresh daily in our kitchens, and we don’t cut corners.

“Our Alfredo sauce is made with real Parmigiano Reggiano. Our vodka sauce with prosciutto really has prosciutto in it. Not ham, imported Prosciutto di Parma. Nobody else is doing that. We are.”

And to think, these are just two of the items you’ll find at the you-won’t-believe-they-have-this-much-freshly-prepared-food-in-one-place market that opened its second New Jersey location this week.

There is seafood — including live lobsters. There is Sterling Silver quality meat — cut and trimmed to order. There is store-made pizza with toppings picked from the produce aisle. There is a deli — with seven types of meatballs and various pasta dishes.

You can get soups, salads and sushi. The cheese and pasta department features store-made mozzarella and fresh pasta of all types. There’s the largest selection of olives you’ve ever seen. The bakery is run by a guy whose family has been in the business for three generations. And, of course, there’s fresh coffee.

There’s even a cookie and sweets center — featuring a cotton-candy topped pretzels and something called a chocolate bomb, which dissolves when dropped into warm milk.

“You can’t call us a supermarket; you can’t compare us to other supermarkets — that’s not what Uncle Giuseppe’s is,” Olivieri said.

The first Uncle Giuseppe’s opened in East Meadow, Long Island, in 1998. The 7,800-square-foot-store was unlike anything in the industry, DelPrete said.

“We wanted to take the supermarket experience and make it a real experience,” he said. “That’s the whole promise.

“I grew up in another era, when you used to go to the butcher store, the seafood store and the bakery. We wanted to put that all under one roof.

“And we wanted to add some theater to it.”

While there are more than two dozen chefs working around the clock in the in-store kitchen, so much of the freshly prepared items are made in front of the customers.

“We want to let people see that it’s being made fresh,” DelPrete said. “That’s really what people love about what we do. Everything you see here is being made on premise. People seem to really appreciate that.”

The theater isn’t just in the preparation. On weekends — at each of the company’s 10 locations in the New York/New Jersey area — they have a professional singer on premises, adding to the atmosphere.

Sinatra, the opera, traditional Italian favorites. It all adds to the ambiance, DelPrete said.

“It’s all about the experience,” he said. “In the days of everybody pushing buttons to buy online, we want to make it fun. We want to give them a reason to come out.

“We try to hit all the senses sight, sound, smell and of course, taste.”

The Uncle Giuseppe’s location in Morris Plains on Route 10 sits in between a Wegman’s and a Trader Joe’s. A ShopRite of Greater Morristown — a huge store that also claims a heritage to a European food hall — is less than a mile away. A Whole Foods location isn’t much farther than that. And there’s a Stop & Shop within eyesight of Uncle Giuseppe’s.

“It’s hard to really say that we have competitors, because we are so unique,” he said. “We have things that they just don’t have. We are an upscale Italian gourmet market. We really pride ourselves on customer service and on culture. It’s an experience.”

Which draws a different type of customer — at different times of day, he said.

While the store offers the traditional boxed foods you can find anywhere, prepared foods make up the largest portion (70%) of sales. It brings in customers 3-4-5 times a week, Uncle Giuseppe officials said. And, while lunch is busy, the store is busiest later in the day — often between 6-7.

“We’re here for convenience,” Olivieri said. “You can come in and not worry about what you are going to make for dinner — you just have to decide what you want for dinner. We have everything you’d ever want to make your own meal. We have fresh food that can be cooked. We have prepared food that just needs to be heated.”

Uncle Giuseppe’s is not a one-day-a-week store.

“We’d like to have people here every day, and we know people come to our stores every day,” DelPrete said.

The conversation among management isn’t whether people will come — it’s why they come.

Some say it’s the fresh mozzarella made every morning. Others point to the fresh pasta — and the unusual varieties of it, including squid linguini and pappardelle.

All say it’s the freshness.

Olivieri points not only to the produce — but the fact the chefs in the store shop in the aisles every morning.

“It ensures they have fresh ingredients — and the customers get fresh produce,” he said. “You don’t have to wonder how long the tomato has been out there, I guarantee you it went out there today.”

Freshness is not easy to maintain.

Olivieri said all of the departments need to time their creations to ensure there is no waste by the time the store closes at 10:30.

“We learn how to prepare so that there’s nothing left at the end of the day, because we want to start fresh every morning,” he said.

And bring in the freshest products. Olivieri points to the seafood area.

“We have the finest fish from all over, but there is not a fishy smell when you are here,” he said. “That’s because it’s fresh. If you walk into a store and you can smell the fish, walk out.”

Uncle Giuseppe’s has 10 locations: Seven on Long Island, one in Westchester and now two in New Jersey, as the Morris Plains store joins one that opened in Ramsey in Bergen County in 2019.

That Ramsey store led to the Morris Plains store.

“We knew we had customers coming there from this area — even though it was 30 or so miles away,” he said. “We’re confident this store will draw from that distance, too. We are a destination for people.”

Those coming from Central Jersey may not have to travel that far for long. A store in Tinton Falls is coming around Labor Day. More stores are coming after that, DelPrete said.

“We had our first foray into New Jersey with the Ramsey location, and the reception was amazing,” he said. “So, we’ve spent a considerable amount of time over the last few years looking at New Jersey, because we believe there’s a lot of runway for us to open stores here.”

The Morris Plains location, which had a soft opening Tuesday, is planning a bigger rollout this weekend. Word of mouth, however, may have beat them to the punch. By Thursday afternoon, the store already was jammed.

Olivier, who rotates among all 10 locations, said he wasn’t surprised.

“I’ve seen it time and time again,” he said. “When people hear about Uncle Giuseppe’s, they are drawn to our brand, and they’re drawn to our concept.

“I know, with this particular location in Morris Plains, there were whispers about when we were going to open the doors, and there was a lot of buzz throughout the town. Today is the third day that the doors have been open, and it looks like a regular day in some of our more established stores.”

DelPrete said he also wasn’t surprised by the turnout.

“New Jerseyans like to eat as much as we do in New York,” he said with a laugh. “And they seem to appreciate the way we do things here, which is everything made on premises, everything made fresh — and with great customer service.”