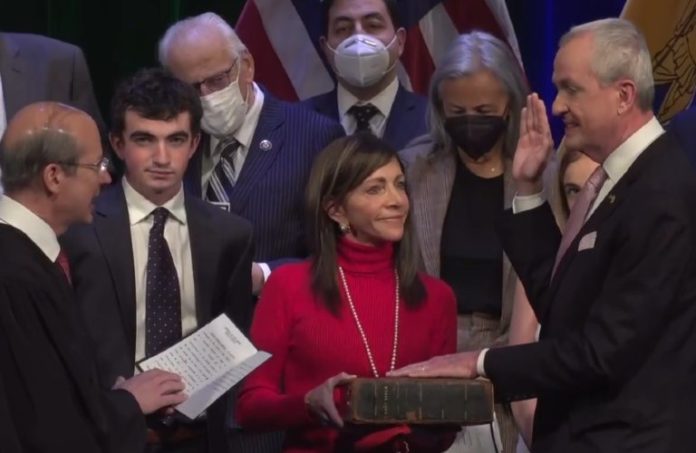 It’s hard to say what the second-term inaugural address from a Democrat should be. After all, the state has not had such a day in generations.

But, after taking the oath of office for a second time, the first Democratic governor to do so since Brendan Byrne in 1978, Gov. Phil Murphy made it clear that his progressive vision for the state — “stronger and fairer,” he has called it since his first campaign — still is front and center on his list of priorities.

“I first sought this office with a clear purpose: To grow and strengthen New Jersey’s middle class, to make our state stronger and fairer and to build an economy that works for every family,” he said.

“In short, to see New Jersey be the place where the American dream not only lives, but thrives.”

Gov. Phil Murphy’s inaugural address for his second term was much more about his progressive vision for the state than business initiatives.

But, he did say the state is achieving his long-stated vision of an “innovation economy” — one he feels is making the state a model for the nation and the world.

Among those he noted as big successes included clean energy (most notably offshore wind), life sciences, TV and film production and sports betting.

“Now is the time to redouble our efforts to ensure the New Jersey we hand to the next administration is stronger, fairer, more resilient and better situated for the years to come,” he said. “It is about voices raised together with a backbeat you cannot miss. It is about taking away obstacles and adding seats around the table of possibility and prosperity.

“Most of all, it is about filling the air we breathe with real opportunity and full equality.”

The promises were the same as they have been from Day One: Making New Jersey a better (and more affordable) place to live.

How you feel Murphy did on those goals in his first term likely aligns with your vote. And, with a reelection victory that was closer than many expected — one that cost his party overall — it’s easy to reach the conclusion that not everyone is in agreement.

Murphy, however, has not let those results steer him from his priorities. In fact, he has said his willingness to stick to his progressive ideals is the reason he was able to get reelected.

As he spoke Tuesday, he acknowledged that he must also look back while looking forward. He spoke of uniting the state.

“As diverse as we are, we share common challenges, common cause and a common bond,” he said. “Together, we have been through so much. And, together, we will seek a brighter tomorrow.

“Yet, just because one year or one term ends and another begins does not mean that the challenges of the previous four years cease to exist.

“If only it were that simple: We know that many challenges remain — and that many more will surely come.”

Murphy said he will attack them all the same way.

“Our task is about steady, hard work toward a vision that brings us all together and brings us all along,” he said. “In this, and more, I am who I said I would be.

Murphy said his overall aim remains the same: To create a New Jersey that is more affordable, especially when it comes to three big expenses: health care, higher education and property taxes.

And he vowed he will keep working for New Jerseyans in his second term.

“That is why I am committed to making sure everyone across our great state has their fair shot and each of us does our fair share.

“That is the American dream with New Jersey flavor and attitude — and Jersey values.

“And that is how we make New Jersey the Opportunity State.”