Home Opinion Editor's Desk A hero’s welcome: When was the last time you thanked a health...
Facebook
Twitter
Linkedin 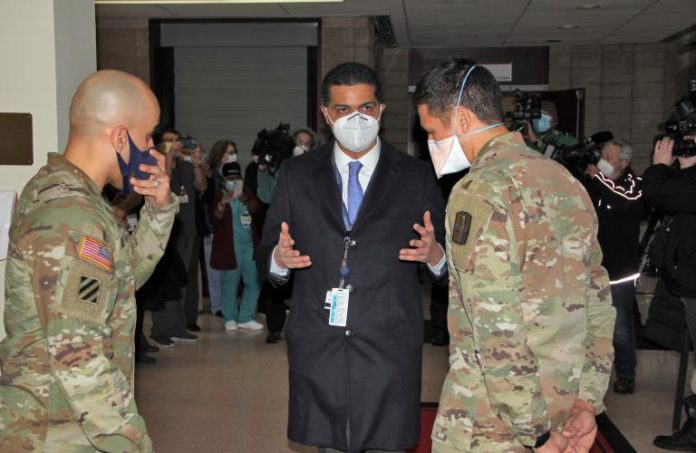 When approximately two dozen health care workers in the Army arrived at University Hospital in Newark on Thursday, they were greeted with a “clap in” to thank them for coming to help an exhausted health care workforce.

The emotional moment of recognition came from the group that truly understands the power of praise: the staff itself.

It was reminiscent of the early days of the pandemic, when health care workers often were clapped out of the hospital after their-much-longer-than-eight-hour shifts by groups of volunteers who just showed up at the hospital to express their gratitude.

Days when “Thank You” cards and freshly prepared meals were found throughout facilities — and health care hero signs were on their neighbors’ yards when workers returned home.

Days when everyone prayed that a miracle vaccine would help us put the pandemic behind us.

Shereef Elnahal, the CEO of University Hospital, wanted to bring that back Thursday — if only for a moment.

“We had a great experience clapping out the members of the Army Reserves in 2020,” he said. “It was just such an emotionally meaningful time that we wanted to do it again.”

Hospital executives across the state were no doubt thrilled to see the outpouring of affection. They know how important this simple act of recognition it is to health care staffs struggling to keep up with an endless stream of cases.

Those “Thank You” cards and lawn signs meant a lot, they said.

In fact, Kevin Slavin, CEO at St. Joseph’s Health in Paterson, said they may be needed more now than ever before.

“Some would say this is actually the fifth surge — and, in many ways, it’s more difficult than the first four,” he said. “Maybe COVID is not as much of an unknown and this variant is not as intense, but, when you go through it four or five times — and you don’t have the help from the rest of the country that we had in the beginning — it’s hard.

“Now, many of them have gone out positive themselves or had family members sick.”

“At the beginning, when our staff left, they saw the health care heroes signs everywhere and they were applauded by their neighbors,” he said. “There’s just not as much of that anymore. We’re trying to bring that back.”

So is Hackensack Meridian Health. CEO Bob Garrett said bringing back these morale-boosting moments is at the top of his wish list for 2022.

“We actually had this conversation at our board meeting last week,” he said. “We need to make extra efforts to remind the community exactly how our team members, particularly those on the front line, have been so heroic and courageous and continue to fight this virus.

“We’re coming up on the second anniversary. And, maybe, as trivial as it sounds, those lawn signs and those food donations to support what was happening in 2020 do make a big difference.

“The public generally has focused on other things in the meantime. So, we need to remind folks that our health care workers are still there. Two years later, they’re still fighting this virus.”

Elnahal said he made sure to tell the members of the Army medical support team just how important they are to the hospital — at the public ceremony to announce their arrival and in a private meeting afterward.

He said the group, which includes those trained in a variety of roles — physicians, nurses, patient care technicians, respiratory therapists and more — are going to be dispersed strategically throughout the hospital.

“It’s where we have staffing shortages on any particular day or shift,” he said. “In some cases, they’ll be dedicated to places like the emergency room, which has been particularly hit hard, but, in other cases, they’ll float into areas where they’re needed the most.”

Elnahal said he’s hopeful the experience will mean a lot to both parties.

“Hopefully, this isn’t just beneficial for us,” he said. “This is an extraordinary place to get clinical experience. You see the entire spectrum of pathology here because there are a lot of public health issues here. Hopefully, they’ll be able to bring more skills back to their bases.”

When they go back.

The team, which includes people from all over the country, is scheduled to be in Newark for 30 days. Elnahal already said he’s hoping their stay can be extended — although he’s grateful that the hospital was selected by the federal government for this extra assistance.

Whenever they do leave, Elnahal said they can expect to get a “clap out” ceremony.

The key is bringing more of those moments to more hospitals around the state.

Deb Visconi, the CEO of the state’s largest hospital, Bergen New Bridge Medical Center, said she’s doing whatever she can to let her staff know how much they are valued.

“We try to do whatever we can to give our staff recognition on a regular basis,” she said. “We give our staff lunches and gift cards. And, when patients write letters, thanking people, we make a big deal out of it.”

Visconi said she is appreciative of the efforts of the Bergen New Bridge Medical Center Foundation — which constantly is looking for organizations and individuals that want to give back.

“We are so grateful when organizations have reached out to say, ‘We’d love to do something because we don’t want to forget our health care heroes,” she said. “It means more than you know.”