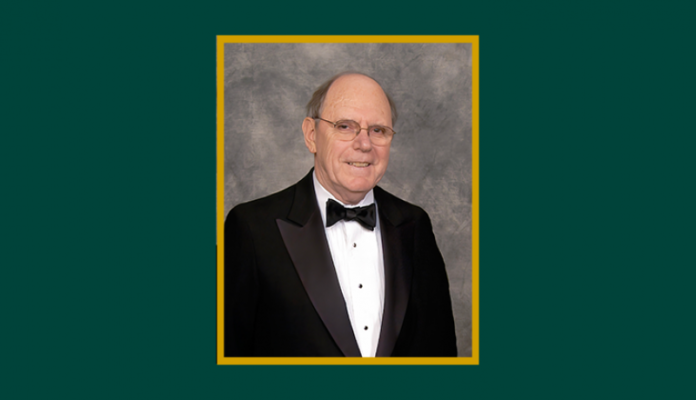 New Jersey City University is mourning the passing of John J. Moore, a teacher, lawyer and university trustee, who died Jan. 14 at age 88.

The former chairman of the board of trustees, current trustee emeritus and NJCU Athletics Hall of Famer was called one of the most influential alumni and leaders in NJCU’s history since arriving on campus in 1952. He died at his home in Teaneck just 10 days shy of his 89th birthday.

Dr. Sue Henderson, president of New Jersey City University, said: “John Moore is one of the most distinguished alumni and influential leaders in the history of this university. His deep love for his alma mater was evident in his words and his actions, and his vision and foresight for what NJCU could and should be will have a long-lasting imprint. John lived the university’s mission through and through. While he will be missed, John has impacted generations of Gothic Knights through his work and earned the respect and admiration of many. Our thoughts and prayers go out to his wife, Carmela, his children and grandchildren and extended family, and all who knew and loved him.”

Moore was accepted to Jersey City State Teachers College on a scholarship in 1952, and his obituary reads that it was an experience that would change his life forever.

In 1982, he was appointed to the board of trustees of Jersey City State College, was named the chairman of the board in 1989, and served for a total of two decades, longer than any other person in its history.

During his tenure, Moore oversaw the expansion and formal transition of the college to New Jersey City University. He was inducted into the Jersey City State College Athletic Hall of Fame for Men’s Basketball in 1989 and later honored with the naming of the John J. Moore Athletic and Fitness Center, or “JMAC,” the current home of the Gothic Knights basketball team.

Moore oversaw the expansion and formal transition of the college to New Jersey City University in 1998. He also served as a founding member of the New Jersey Governing Board of State Colleges from 1985-1990 — the precursor of the New Jersey Association of State Colleges and Universities — and was the board’s inaugural chairman in 1985. He was a member of the Board of Higher Education for the state of New Jersey from 1985-1987, where he worked to secure child care funding on behalf of single mothers returning to school.

Joseph Scott, the current chair of the NJCU board, said: “On behalf of the board, we are eternally grateful for his service to the university. While most of us currently on the board did not have the benefit of serving alongside John while he was chair, his devotion and loyalty to NJCU, its mission to provide life-changing social mobility for its students and his desire for the university to thrive for generations to come, was clear to all who knew him and will certainly live on.”

Moore was quoted in his later years as saying “I find myself to have been blessed with good fortune in my career and, more significantly, with my family. I thank them for being what they are and for being a part of my life. … I am grateful for what has happened, what I have and who I am.”

NJCU to partner with Consulate General of Mexico in N.Y. to...