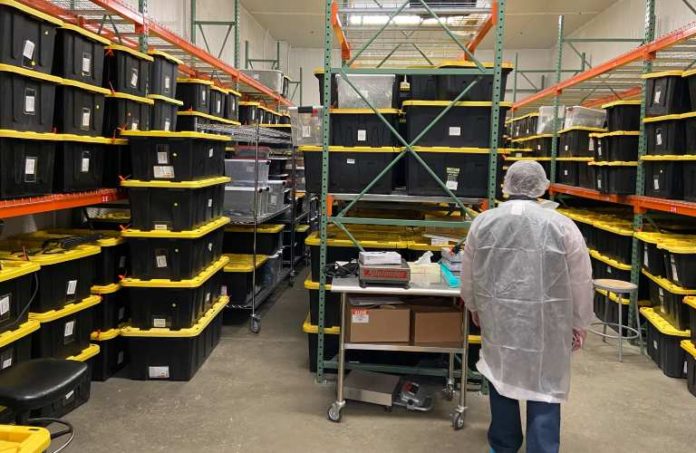 As New Jersey voters were giving an enthusiastic two-thirds majority go-ahead to an adult-use cannabis market in the Garden State, national cannabis business Curaleaf was stacking a storage vault near to a ceiling-touch with tote bins of would-be recreational marijuana products.

That was nearly 15 months ago now. Those 14-foot towers still stand in neat rows, mostly untouched.

According to the company’s regional president, Patrik Jonsson, it has had to add another four entire 20-by-40-foot storage vaults filled with more of what’s continually harvested from a marijuana growing process started long ago. By the end of the month, it might need yet another storeroom.

It’s a very plain-to-see example for Jonsson of how the investments into the state’s cannabis market are wasting away during delays in the rollout: There’s the possibility the products in these cramped storage vaults are just doomed. They’re agricultural products. And, like all products of that sort, there’s expiration dates to worry about.

The South Jersey-focused Curaleaf, one of the world’s largest cannabis businesses, is not alone. Jonsson said it’s a similar predicament for all businesses that have prepared to jump-start the state’s recreational marijuana scene, after Gov. Phil Murphy, who expressed a wish to introduce a legal marketplace within 100 days of taking office, signed a legalization bill in February.

We checked in with some of the state’s top legal and financial experts for their thoughts on a variety of questions, including:

Companies that have had products sitting in boxes through every one of those twists and turns have no option but to wait. Given the federal illegality of marijuana, pot grown in New Jersey has to stay in New Jersey. Even though about 20 states have green-lit adult-use cannabis, there’s no interstate commerce allowed.

If the wait goes on much longer, companies may have to consider destroying expired products, according to Matt Harrell, vice president of government affairs for Curaleaf, and a leader of the state’s marijuana business group, the New Jersey Cannabis Trade Association.

Before the THC-containing flower buds harvested from cannabis crops dry up, extracting the plant’s oils for edible products can extend its shelf life. But those, too, expire after some time.

And there’s a lot of product at stake. Harrell said there’s more than enough product already in storage to meet a new demand in the recreational market, while keeping shelves stocked for medical marijuana patients. If the company stopped growing crops tomorrow, Harrell said, it would have two years’ worth of cannabis for those with medical marijuana cards.

“There’s enough in storage that we now have employees whose job it is to go into these vaults and burp the containers of products, so that the air and humidity inside is right,” he said. “Honestly, that’s a job we shouldn’t have.”

Needless to say, there’s some frustration in the industry.

Adam Goers, senior vice president of corporate affairs for Columbia Care, one of the nation’s original providers of medical cannabis, said the investments can be tallied not just in the pounds of products locked away, but in the number of employees denied work opportunities.

“These are good jobs in this sector, jobs that have significant benefits, retirement and health insurance,” he said. “And that’s one part of how, by making investments in cannabis, we do good things for a community.”

Columbia Care, which has medical marijuana dispensaries in Vineland and Deptford, has, like Curaleaf, hired aggressively ahead of a hoped-for conversion to recreational sales.

Without those plans unrealized, Jonsson said a lot of good candidates have had to return to working previous careers. The company isn’t letting people go, but there’s natural attrition that’s transpiring during the wait to get the adult-use side of the cannabis industry underway. And they aren’t necessarily back-filling those positions.

“And it’s not just about the jobs or the products expiring,” Goers said. “Ultimately, it’s a loss for taxpayers and voters who overwhelmingly asked for this. The state is losing out on significant tax revenue. Arizona, which passed their (legalization bill) the same day in 2020, even as a smaller state, has brought in about $200 million in tax revenue since.”

Goers, who also has a post at the New Jersey Cannabis Trade Association, cited estimates of a quarter-million dollars in tax revenues lost each day New Jersey’s 21-and-up marijuana market is offline.

“And that’s a lot of tax dollars to lose out on as we’re facing interesting economic conditions during the pandemic,” he said. “We’ll keep raising our voices so that the overwhelming number of people in New Jersey who ask for adult-use sales can see it as soon as possible.”

He and others in the industry are quick to add that, meanwhile, the illicit market is loving the delays — and often flaunts the fact that its non-taxable goods aren’t piled high in storage.

It’s all the more reason for their tested and regulated products to come out of their storage purgatory, Goers argues. And the sooner, the better.