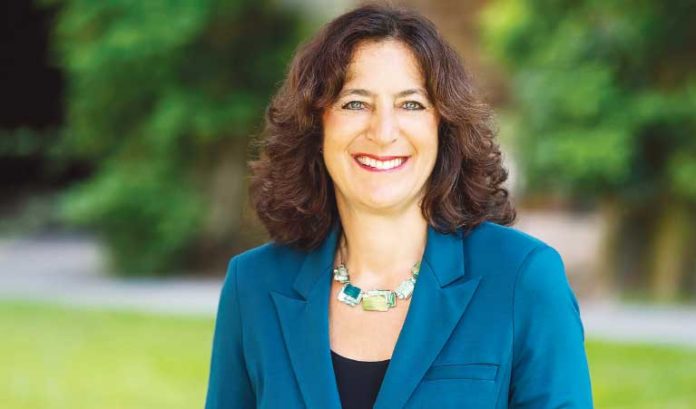 During Princeton University’s Engage 2021 conference, Andrea Goldsmith, dean of engineering and applied science, shed some light on why she believes the Princeton area will lead New Jersey into becoming a hub for hard-tech startups.

She was interviewed by Naveen Verma, director of Princeton’s Keller Center, in a session called “Princeton Engineering as Catalyst in the Innovation Ecosystem.”

Goldsmith started her discussion with an overview of her entrepreneurial career, much of which was in Silicon Valley. She knows all about how hard it is for “hard-tech” startups to get funding, she said. In her first startup as a co-founder, which was in the Wi-Fi chip space, she and her co-founder made many, many mistakes, almost going under because they were running out of money.

“What I didn’t realize is that building a Wi-Fi chipset that was state of the art and the best in the world really changed some of my views on research. I started doing more research on hardware. I started realizing that analog matters, not just what happens in the digital world, which is where all my research had been. I started looking at systems that Wi-Fi can enable. I saw that low power was really important. So many dimensions of my research changed suddenly, but impactfully, and also my teaching, because when I would teach wireless communication … I could pepper my lectures with actual experiences,” and show students why what they were learning mattered.

Now that she is at Princeton, she is bringing her entrepreneurial spirit and know-how to the university. In the discussion with Verma, one of the first topics Goldsmith tackled was innovation.

However, there are technologies that university researchers can see leading to a differentiated technology product in a relatively short amount of time.

“And, often, it’s only the faculty member or their students or their postdocs that understand the technology at a deep enough level to take it into a product. … If the researchers are excited about seeing the impact of a technology, then it’s a wonderful pathway for them to go and start a company,” she added.

Verma asked Goldsmith, “What will it take to make the New Jersey area a hub for innovation?” He then asked, “How do you see the differentiation in innovation as a catalyzer that Princeton can bring?”

Differentiating Princeton and New Jersey is something Goldsmith has thought about a lot, she said. She noted that Silicon Valley was named after the silicon that was going to be the basis for all other discoveries and the hardware it enabled. She added that almost all Silicon Valley investments are now in software, because it takes less money to bring software to market and it has quicker exits. By contrast, complex hardware or systems that solve complicated problems are more difficult, take a long time to develop and often fail.

“Now, when we look at the technologies that are emerging as the fabric for the next wave of innovation, a lot of it is hard technologies — ‘hard’ not meaning necessarily hardware, but hard to build, hard to cross the ‘Valley of Death,’” Goldsmith said.

(Note: The “Valley of Death” is the period during which a startup needs a lot of investment to stay afloat; this occurs after the product is out of the laboratory, but hasn’t yet achieved scale.)

“Whether it’s a chip company, or quantum computing or devices with materials or complex systems, you can’t do a startup with a few people in a garage that are self-funded to create those kinds of companies. You need a lot of investment, and ‘patient investment,’” she said.

Companies in “hard tech” take years before they have a prototype that can be used as the basis of a successful company.

“I think that is our advantage here in Princeton. … When I look at Princeton from a distance, I think it looks a lot like how Silicon Valley looked to Fred Terman in the 1950s,” she continued. “You know, there’s nothing around us. We’ve got lots of cheap land, which is important for things like biotech, and hardware, and quantum and anything that needs large labs, whether they’re wet labs or not.”

Goldsmith sees Princeton as perfectly located, not only to take advantage of the space around it to develop a startup ecosystem for companies that need a lot of room, cheap land and entrepreneurs, but also to reach up to New York and down to Philadelphia to create an ecosystem including the three states.

“It doesn’t cost a lot of money to put up a startup in New Jersey, versus New York City,” she said. “And New York City is the second-fastest-growing tech hub in the world, and we’re right in their backyard. I don’t view the drive to New York, or the train, as a barrier to tapping the innovators and entrepreneurs and VCs and angel funders and customers that are in New York City, or in Philadelphia for that matter.”

Goldsmith noted that, as a two-time female founder in Silicon Valley, she has experienced what it is like to be part of a diverse community.

“It’s very hard,” she said, but “we have the opportunity to create a tech hub that embraces diverse entrepreneurs, and innovators. And those people, people with diverse experiences, have a lot of new ideas. They have a lot of creativity; they have experiences that can form the foundation of a differentiated technical company. I would like them to come to our tech hub, which will embrace them and provide the platforms so that they can be just as successful as any other entrepreneur.”

Goldsmith pointed to a recent “big win” for Princeton: the acquisition of a HAX accelerator, which is being funded by the Princeton-based global venture capital firm SOSV.

“HAX is an accelerator for hard tech, for the kind of technology that requires time to incubate and cross the Valley of Death to be ready to launch into a product. And, so, we put in a proposal with the state of New Jersey to get HAX’s third accelerator, which is focused on decarbonization and advanced manufacturing, including robotics. (These are) all the things that are initiatives in the School of Engineering around energy, environment, automation and robotics systems. We competed with universities across the East Coast and Midwest, and we won.”

HAX is going to set up a 60,000-square-foot accelerator in Newark, she noted.

“Princeton can compete with anyone when it comes to being a catalyst for innovation and entrepreneurship,” Goldsmith noted. “I think HAX is going to be transformative for our entrepreneurs that want to tap into this kind of support network and connections.”