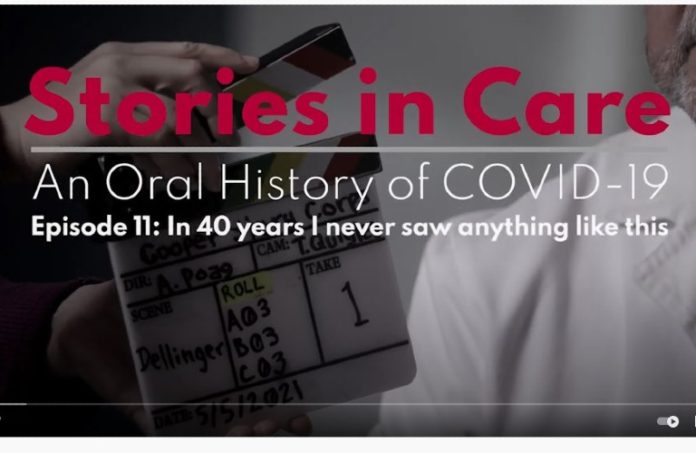 Told in emotional, first-person accounts, “Stories in Care” captures the triumphs, tragedies and recollections of members of Cooper’s Critical Care team through one of the world’s most pressing public health crises in decades.

“While the story of COVID-19 is often told in numbers — tests, hospital admissions and deaths — we wanted to capture and preserve the many stories on the more human aspects of fighting the disease,” said Dr. Nitin Puri, director of Critical Care Medicine at Cooper, whose team is featured in the series.

Since it first aired on Cooper’s social media channels and website, the series has had more than 38,000 views. Last year, the award-winning series also won a coveted Gold Award in the 42nd Annual Telly Awards, which recognizes the best work created in video and television across all screens. “Stories in Care” was one of 12,000 Telly Award submissions in 2020.

“As we approach the two-year anniversary of our fight against COVID-19, it was important to have a preserved history of the efforts and recollections of Cooper’s courageous team members, who experienced what it was like in the early period of this fight,” said Kevin O’Dowd, co-CEO of Cooper. “We are honored to be recognized with this award.”

“Years from now, when the pandemic is long over, we and future generations of health care workers will benefit from having a video history of the experiences of those who worked tirelessly on the front lines fighting COVID-19,” said Dr. Anthony Mazzarelli, co-CEO of Cooper.