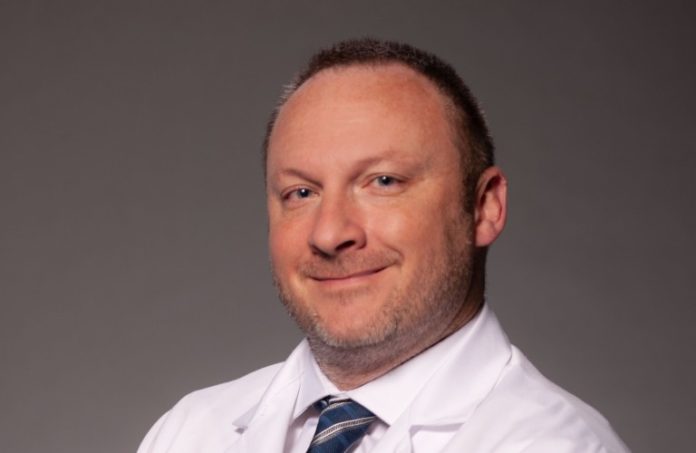 When Phoebe Anderson, a 20-year-old student at the University of California-Berkeley, tore her anterior cruciate ligament, she and her mother, Larissa Anderson, began researching surgical options.

Dr. Sean McMillan, sports medicine surgeon at Virtua Orthopedics & Spine, knows what it means to save a person’s ligament rather than replace it, and, with Virtua Health being the first health system in New Jersey to offer a way to treat rather than replace, the Andersons found their surgeon and the procedure.

The BEAR Implant treats tears of the ACL, one of the most common knee injuries.  It is considered the first medical advancement to enable the body to heal its own torn ACL. This novel approach is a change from the current standard of care that has been utilized for the last 30 years — reconstruction that replaces the ACL with a graft. Virtua Orthopedics & Spine is one of only a few practices nationwide selected for the clinical trial.

“The ability to save a patient’s ligament rather than replace it has many advantages,” explained McMillan. “Encouraging clinical studies have shown faster recovery of muscle strength and higher patient satisfaction, which makes the BEAR Implant especially ideal for younger athletes.”

Every year, approximately 400,000 ACL injuries occur in the U.S. A torn ACL does not heal without treatment, making ACL reconstruction one of the most common orthopedic procedures in the country. During a traditional ACL reconstruction, the surgeon completely removes the remaining torn ligament and reconstructs it with either a tendon from the patient’s leg (called an autograft) or a deceased donor (called an allograft).

The BEAR Implant, by contrast, acts as a bridge to help the torn ACL heal. The implant, injected with the patient’s own blood, is inserted between the torn ends of the ACL in a minimally invasive procedure. This enables the ACL to fuse back together, maintaining the original attachments to the femur and tibia. As the ACL heals, the implant is resorbed by the body within approximately eight weeks. Early research has shown that the implant and ACL restoration procedure may reduce the risk of long-term arthritis, which is a concern after ACL reconstruction.

“We were looking for the best care for Phoebe and were intrigued by what we read,” said Larissa Anderson. “Regenerating (tissue) is less invasive than reconstructing and seems to put less stress on the body. As Phoebe is a young, competitive athlete, we want to make sure she has the best opportunity to continue with sports and fitness well into the future.”

Anderson contacted Miach Orthopaedics, manufacturer of the BEAR Implant, and secured a list of participating physicians. She chose McMillan over surgeons closer to home because of his expertise and experience in sports medicine.

“Dr. McMillan has an illustrious career, extensive credentials and excellent patient reviews. All that, coupled with our having an extended family support network in New Jersey, gave us faith to move ahead,” explained Anderson. “We are grateful for Dr. McMillan and look forward to Phoebe’s return to sports after her rehabilitation.”

Virtua Orthopedics & Spine is the only orthopedic practice in the region participating in BEAR III Clinical Trials. McMillan performed Anderson’s surgery at the Centennial Surgical Center in Voorhees.

“I believe Virtua was selected as a clinical trial site for many reasons. As evidenced by the recent affiliation agreement with Rowan University, Virtua is dedicated to providing the highest quality of innovative research in support of our patients,” explained McMillan, who is a member of the orthopedic surgery faculty at Rowan School of Osteopathic Medicine. “Virtua’s research department has worked tirelessly to ensure that the process is on-point. Their outstanding efforts allow trial sponsors to see that Virtua is proficient in this high-caliber research.”