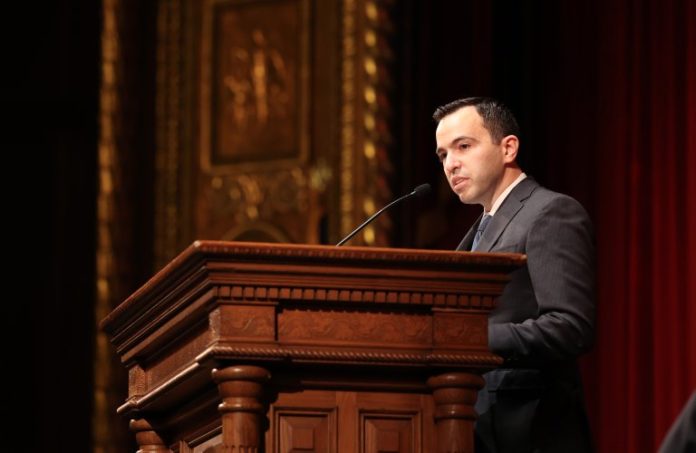 After he shared a belief that all children deserve a good home and a quality education … after he pledged that the safety of residents will be his top priority — and did so with a desire to tackle the root causes of gun violence … after he acknowledged that, for too many, the trust between law enforcement and the communities it serves is broken … and after he chuckled at the cackles of his young son because, at 35, he’s not just a youthful nominee for attorney general but a young father … Matt Platkin attempted to sum up the potential of the job in one phrase.

It’s one of the translations of the famous Hebrew phrase from the Torah: Tzedek, tzedek, tirdof.

Platkin said he saw it in his home growing up — “every morning when I woke up and every evening before I went to bed,” he said — and sees it every day now.

“Since I’ve been an attorney, that print has hung in every office I’ve ever held — a reminder of what this is all about,” he said.

The nomination of Platkin, who served as Gov. Phil Murphy’s chief counsel for much of his first term, does not appear to be facing much opposition. He almost certainly will be confirmed by the state Senate. When he is, he said that that phrase will guide him.

“To this day, when I see that print, I’m struck by the word choice of that translation, a word choice that has been debated by rabbis for centuries,” he said. “Justice, justice, shalt thou pursue.”

“Justice is a pursuit. It is not something you complete, perfect, accomplish or achieve. It is a pursuit — a never ending, tireless pursuit. A pursuit that’s full of disappointments and setbacks, incomplete steps and half measures. But this pursuit of justice is not optional. It is, in fact, our obligation. And we are instructed that, only by pursuing justice in an honest and just manner, can we faithfully fulfill that obligation.

“As attorney general, those words will be my North Star. I am privileged to wake up every day, leading a department of nearly 8,000 women and men who have committed their lives to that pursuit. Collectively, we will work tirelessly to protect the people who call this state home.”

He then turned to Murphy: “Governor,” he said, “thank you for this honor. I’m excited and I’m ready to get to work.”

To be sure, there is plenty to do. Platkin acknowledges that, too.

He vowed to make a stand with one of Murphy’s greatest goals: increased attention on gun violence.

“As attorney general, my highest priority will always be keeping our residents safe,” he said. “This means, in particular right now, bringing all necessary resources to bear to prevent violent crime. And, because most violent crime involves firearms, we will use has every tool at our disposal to tackle the root causes of gun violence, including by holding those accountable who foster gun violence in our communities.”

Platkin said he will make sure the office places a great priority on protecting the civil rights of residents. And will do so, he said, while addressing the increased burdens placed on law enforcement.

“We will recognize and seek to relieve the often-overwhelming burden we have placed on law enforcement to not only prevent crime, but to serve as addiction and mental health counselors, all while handling a global pandemic,” he said.

And, Platkin said, he will continue to pursue meaningful affirmative litigations on behalf of the state.

“New Jersey has amongst the strongest consumer protection, environmental and worker misclassification laws in the country, just to name a few,” he said. “We will put these laws to work to provide relief for our residents, whether they have been victimized by a predatory lender, corporate polluter or employer unlawfully depriving them of their hard-earned benefits.”

“New Jersey, we like to say, has great laws. I will make sure they are enforced.”

It’s not an easy job, but it’s one that Platkin seemingly has been preparing for since he grew up in Morris County (“Public schools,” he said proudly), before heading off to Stanford University for college and law school.

Being attorney general represents much more than a dream come true. He began his speech this way.

“To say that this nomination is the honor of my life would be an understatement,” he said. “I am humbled beyond measure by the confidence that you’re placing in me.”

At the end, he acknowledged how he intends to carry it out.

“More than anything,” he said, “I want to express a clear commitment today that, as attorney general, I will wake up every day to serve all 9 million residents who call this great state home.

“I will discharge my duties fairly and without fear or favor. And we will not shy away from tough fights when they are the right fights.”