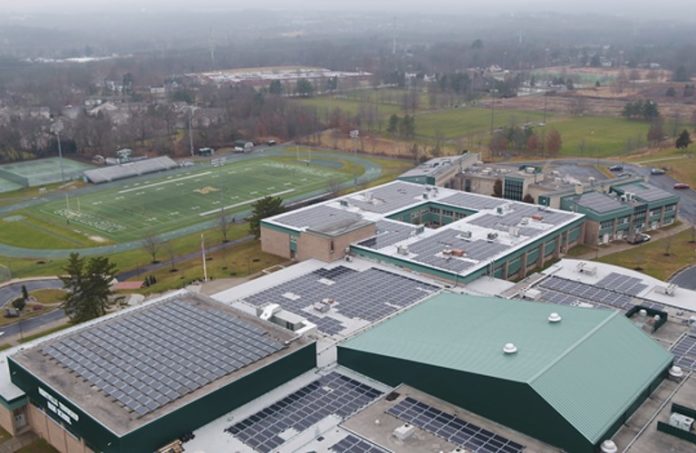 The Montville Township Public Schools and Solar Landscape have energized solar arrays on six of the district’s schools, according to a joint announcement Thursday. Together, the solar panels on these buildings will generate 1.84 megawatts yearly, reducing the district’s total power bill by nearly $1 million over the next 15 years.

The solar project was made possible through a 15-year solar power purchase agreement that enables the school district to install the panels at no cost and purchase the electricity generated at guaranteed discounts every month. The district’s utility cost savings are expected to be more than $980,000 over the term of the agreement.

Based on the EPA’s Greenhouse Gas Equivalencies Calculator, in the first year alone, the installation will reduce carbon dioxide emissions equivalent to:

For Montville Township Public Schools, using solar energy to power school buildings was an opportunity to reduce costs, create educational opportunities for students and be a responsible member of the Montville community.

“Protecting our environment and fighting climate change is a priority for our schools, our students and our community,” said Montville Township Public Schools Business Administrator Katine Slunt. “By using solar energy, we’re now making good use of an untapped asset: our buildings’ roofs. Now, we can be even better stewards of our financial resources and lead our students by example in the fight against climate change.”

“In New Jersey, solar can work for everyone, especially school districts like Montville Township Public Schools,” said Solar Landscape CEO Shaun Keegan. “Not only are schools a vital part of the state’s transition to a clean energy economy, they are also valuable platforms for everyone to learn about how we can reduce our greenhouse gas emissions in a meaningful way. When Montville Township’s kids see that their school is making a difference, they know they can, too.”

N.J. to receive $221M from EPA to help modernize its water systems