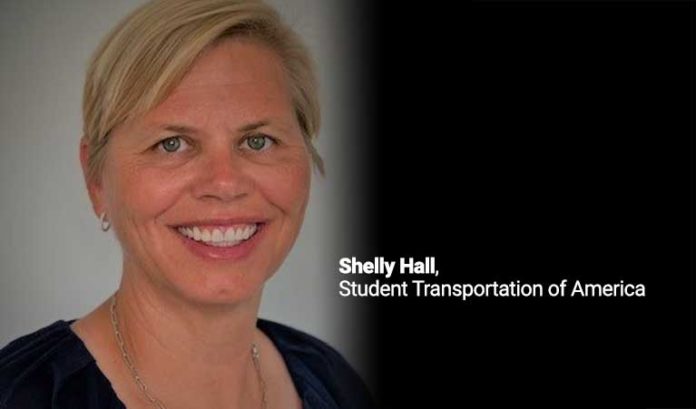 Student Transportation of America announced that Shelly Hall has been promoted to senior vice president of health and safety. Hall joined the company in 2017 as vice president of safety and was tasked with leading the organization’s safety team throughout the U.S. and Canada.

“I am very excited to announce the promotion of Shelly Hall to senior vice president of health and safety. Shelly has been an integral part of our leadership team over the past four years, leading our expansive team of regional safety directors across North America and managing important company safety and compliance programs,” said Patrick Vaughn, CEO. “She has implemented numerous successful training and safety programs, and took the lead on establishing and implementing our COVID preparedness protocols over the past 16 months. Shelly’s hard work and dedication to safety across all aspects of our organization have helped to position STA has a leader in the school transportation industry.”

Since joining STA, Hall has been instrumental in the development of STA’s core training programs, refining a national safety audit process and authored the company’s comprehensive safety policy and procedure manual. 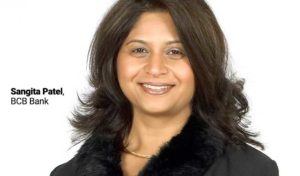 BCB Bank has announced the appointment of Sangita Patel as business development officer at the bank’s Plainsboro branch. She will be responsible for new business development, consumer and business lending, branch deposits, personnel management and daily operations at the branch.

Patel has more than 25 years experience in all retail banking functions, including consumer banking, business banking and new business development. She has earned professional recognition for achievement in branch performance and business production. Prior to joining BCB, Patel was a vice president of business development with Provident Bank. Earlier in her career, she held various retail branch banking manager and banking specialist positions at the former Commerce Branch and Fleet Bank.

Patel is active in several business and community organizations, including the Hindu-Jewish Coalition, the Princeton Chamber of Commerce, the Indo-American Cultural Foundation of Central Jersey and the South Asian Bar Association. 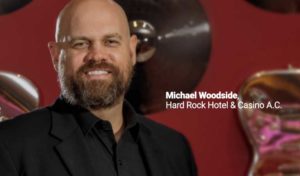 “Hard Rock Atlantic City is excited to welcome Michael to our team,” said Joe Lupo, property president. “His extensive background in our industry is invaluable to our continued commitment to being the leader in live entertainment here in Atlantic City.”

Prior to joining Hard Rock Atlantic City Woodside spent 17 years at Borgata, most recently serving as its vice president of marketing. He also has previous casino industry experience in roles including entertainment, marketing, player development and casino credit.

Seton Hall University is proud to announce that Victor Gomez, Class of 2017, has been selected as the Seton Hall esports manager. The creation of a full-time esports manager position is the first for a Big East university and reaffirms Seton Hall’s commitment to engaging students.

An accomplished alumnus of Seton Hall University, Gomez has been instrumental to the founding, creation and growth of the Gaming Sector club and the current esports program at Seton Hall. The Seton Hall Gaming Sector club was less than a year old when Gomez joined in 2013 — the same year the U.S. officially recognized esports players as professional athletes. Esports were beginning to explode on campuses around the country, and Seton Hall’s teams started training to compete and entering regional tournaments.

Slayback Pharma LLC, a Princeton-based specialty pharmaceutical company, announced the appointment of Pete A. Meyers as its chief financial officer.

Meyers has nearly three decades of rich experience in the pharmaceutical industry straddling the investment banking side as well as being the CFO of multiple public and private companies. He most recently served as chief financial officer of Eagle Pharmaceuticals Inc.

“John and Kraig are talented leaders who are well-respected throughout our organization and the natural gas industry,” said Steve Westhoven, CEO and president of New Jersey Resources. “Throughout their tenures with New Jersey Natural Gas, both John and Kraig have distinguished themselves with proven expertise and a commitment to excellence in everything they do. We are fortunate to have them as a part of our leadership team, and I am confident that they will continue to serve our company and customers well in their new positions.”

Tanenbaum Keale LLP is pleased to announce attorney Josephine Reina has joined the firm as an associate in the Newark office.

Reina’s practice focuses on products liability, drug and medical device, asbestos, toxic tort and environmental matters. She handles all stages of cases and has proven experience collaborating with other attorneys in development of successful defense strategies, trial preparation and settlement negotiations when defending her clients. Her specific experience includes multiparty pharmaceutical and medical device litigation.

“I am delighted that the firm has chosen Mark as the leader of our Cherry Hill office. Mark is a member of the firm’s executive committee and already has substantial experience in firm management,” said Dilworth Chairman Larry McMichael. “He shares my commitment to modest firm growth, while maintaining Dilworth’s reputation for legal excellence. Mark has strong leadership skills and I look forward to continuing to work with him.”

Kelli Kovak joins TRHC as executive vice president. She will be responsible for the overall leadership and strategic direction of TRHC’s MedWise HealthCare Division among health plans, health systems, community pharmacies and other entities that would benefit from TRHC’s MedWise science, technology and clinical services. Pamela M. Lincoln-Giang will serve as senior director, TRHC Office of Strategic Growth. Lincoln-Giang recently held the position of senior director, pharmacy, for Landmark Health, where she had oversight and development responsibilities for its national pharma strategies and operations across 17 states.