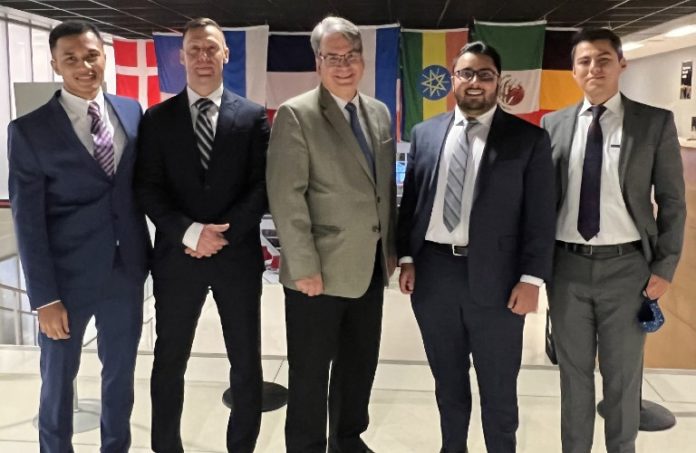 Led by MBA student Thomas Parker, the team of Nicholas Felli, Neil Gajjar and Joseph Russomanno were dubbed the “comeback kids,” by Joe Slota, an executive-in-residence at Rutgers Business School who coached them. To the team, Slota was a “huge motivator,” Parker said.

The Tepper competition centered on a major business issue for the tech sector during the COVID-19 pandemic. Students were asked to identify how Honeywell (the competition sponsor) could better navigate through a period of troubling semiconductor shortages.

Case competitions are considered important experiences for MBA students because they require them to apply their classroom knowledge to solve business problems, typically, as in the Tepper competition, one taken from real life.

The Rutgers MBA students created and continued to refine a PowerPoint deck that would present the team’s examination of the problem in a well-polished 15-minute virtual presentation.

What went into the presentation ended up differentiating the Rutgers team. Parker said the team familiarized itself with Honeywell’s businesses. To get an idea of how the company had already responded to the shortages, the members listened to a quarterly earnings call to hear the CEO’s remarks to investors.

“We didn’t want to go up there and offer ideas that the company already had,” Parker said. “We wanted to know what Honeywell was already doing. That gave us a leg up.”

The students drew on the supply chain knowledge of team member Russomanno, whose contributions also included saving the team’s ability to compete when he stepped in to fill a sudden vacancy.

In their presentation, the Rutgers students included some other differentiating elements: They explained how Honeywell could improve its relationships with suppliers, and they looked around at what other companies were doing in response to semiconductor shortages, including one major’s tech company’s move to refocus business operations until the situation eased.

“We identified answers. We backed things up with facts,” Parker said. “We wanted to keep it simple and straightforward. We brought a clear picture together, and the judges were able to connect the dots.”

In the final round, the Rutgers MBAs were awarded the first-place prize of $7,500. Students from the University of Southern California won second, and a team from the National University of Singapore was the third-place winner.

Slota, the Deloitte executive who coached the Rutgers team, said he was hard on the students, especially at the start.

“There were some rough spots,” he said, “but they believed in each other. They listened to feedback and adjusted things.”

Slota said he was impressed by the group’s cohesion, resilience, and determination to win.

“This,” he said, “is exactly what Rutgers Business School should be known for.”

Carnegie Mellon’s Tepper School of Business is named for David Tepper, at one time the richest person in New Jersey before he moved out of state.

Adubato to teach master class on leadership at Seton Hall