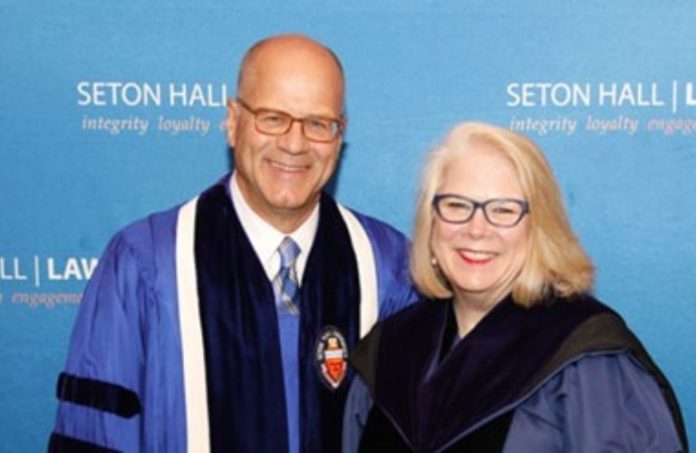 Kevin Marino, the chair of the board of regents of Seton Hall University, and his wife, Rita Marino, are donating $1 million to establish an endowed professorship at Seton Hall School of Law, the school announced.

The professor occupying the endowed chair will be known as the Marino Tortorella & Boyle Professor of Law, named for Marino’s law firm. Marino, Class of 1984, and his partners, John Tortorella, Class of 1999, and John Boyle, Class of 2000, are all distinguished Seton Hall Law alumni.

Marino said the donation is a way to acknowledge the impact Seton Hall Law has had on his life.

About Marino and his firm

Marino, Tortorella & Boyle P.C., a seven-lawyer litigation boutique considered by many to be the preeminent such firm in the New York metropolitan area, was founded by Kevin H. Marino in 1996. All of its lawyers are former federal law clerks with years of experience in prestigious national law firms.

Marino is a fellow of the American College of Trial Lawyers and he and his partners, John Tortorella and John Boyle, are honored publicly each year for their distinguished work in the areas of white-collar criminal defense and appellate, commercial and bet-the-company litigation.

“When Seton Hall Law opened its doors to me in 1981, it ignited my passion for this noble profession and the people it serves and blessed me with a professional life that has thrilled and fulfilled me for the past four decades,” he said.

“Our hope in endowing the MTB chair is that the many distinguished New Jersey firms in which Seton Hall lawyers play such critical roles — and that includes all of the best-known and most well-respected firms in the state — will follow our lead and endow law professorships in their own names.”

“We all recall faculty who gave us the inspiration, skills and encouragement to reach beyond our perceived limits,” he said. “Chairman and Mrs. Marino recognize the central role our professors play in the lives of our students, and have invested in academic excellence through perpetual support for our faculty. Such philanthropic support is vital to our future, and I am very grateful for their generosity.”

“Most important is that our students are the ultimate beneficiaries of this generous gift, which enables us to honor and retain the caliber of faculty who inspire them to pursue careers of impact,” she said. “Through his ongoing involvement with the law school, Kevin knows our faculty, and has a tremendous appreciation for their commitment to produce graduates dedicated to the profession and to inspiring positive change. He also knows the most difficult part of this momentous occasion is selecting one professor among so many worthy colleagues to be the inaugural holder of this endowed position.”