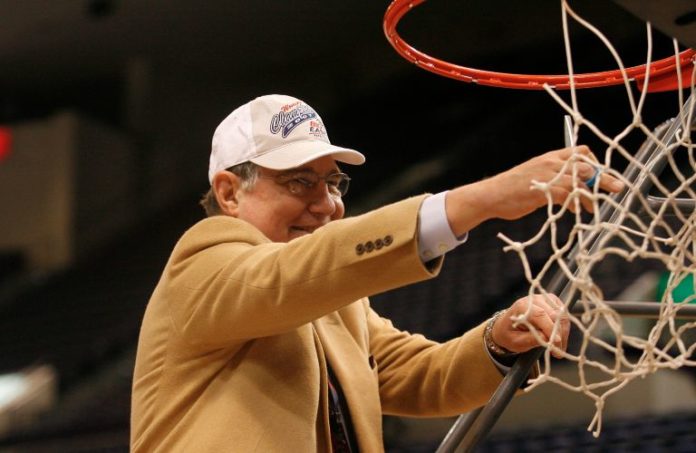 He couldn’t control the weather on that one special day.

That’s what Karen Kessler lovingly remembers about her longtime friend Bob Mulcahy, a man she said always made public service to the state of New Jersey his top priority.

But on this day, Oct. 5, 1995, when Pope John Paul II said Mass at Giants Stadium — the one and only time a pope had set foot in New Jersey — it rained.

Mulcahy, in charge of the New Jersey Sports and Exposition Authority at the time, felt he was being a bad host.

“I’ll never forget it,” Kessler said with a laugh. “Bob was a very devout Catholic. His Catholicism was very central to who he was. And he was obviously so excited that the pope was coming here.

“So, here he was. The place was packed, and Bob was one of the few people who was going to get a chance to meet the pope beforehand. How great is that? But he was upset that it was raining. He said he felt he let everyone down.”

Kessler, who served on both the sports authority commission and the board of Atlantic Health System with Mulcahy, said she admired Mulcahy for always thinking of others — especially the state — over almost anything else.

“Other than his family, nothing was more important than the state of New Jersey,” she said.

He lived a life of service that few from the Garden State can match.

In addition to leading the sports authority for nearly two decades, Mulcahy served for nearly a decade as the athletic director at Rutgers University — where he was responsible for hiring a little-known 34-year-old named Greg Schiano as football coach and making the upgrades to facilities that were necessary for an entry into the Big Ten.

He also served on the board of Atlantic Health for 13 years and was the chair of the Casino Reinvestment Development Authority for a decade.

Mulcahy, who graduated from Villanova University in 1958, served in the Navy and then began a career in politics, becoming a councilman in Mendham at 23 and later serving as its mayor. He served as the state’s first corrections commissioner and was the chief of staff to Gov. Brendan Byrne.

Through it all, Kessler said the state was the only thing that mattered.

“He was a dedicated public servant,” she said. “He was literally nonpartisan. That just didn’t matter to him. At all. It was all about dedication to the state, not a person or party. That’s sort of lost these days.”

For all of his accomplishments up and down the state, Mulcahy will be known to many for his time at Rutgers.

And, while he is credited with hiring Schiano — and helping to turn around the winless program he inherited — it did not end well at the school. Many felt he spent too many public funds to build the program, a decision that led to his departure.

Rutgers’ admittance the Big Ten — a game-changing moment for the university — altered that perception. And Mulcahy, who was elected to the Rutgers Athletics Hall of Fame in 2017, said the event help give him closure.

“Bob was an extraordinary man who led an extraordinary life,” he said in a statement. “He was one of those rare individuals who balanced being a great husband, father and grandfather with being a man of public service and a friend to many. I know how much Rutgers meant to Bob and his family, and how much his legacy means to the history of our athletic department.

“His work and leadership were integral to Rutgers Athletics being in a position to join the Big Ten. We build on the foundation he laid for us. I extend my deepest condolences to Bob’s family and friends. He left an indelible mark on countless coaches and student-athletes and many more. Bob will truly be missed by all.”

Mulcahy’s passing drew comments from many, including:

Walk to Washington (Poll Edition): We asked, you told us …...