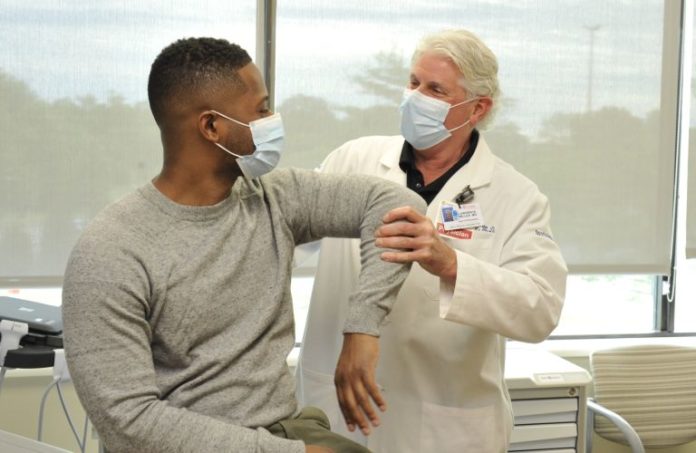 When COVID-19 first flooded New Jersey hospitals in the spring of 2020 — and physicians searched for ways to help do their jobs in a safer and more effective manner — they often turned to technology for assistance.

Thankfully, a lot of options already were there.

“There really was a lot of technology that was driven to step up,” he said. “And most of it was already on the roadmap of what the hospital wanted to do with its IT and technology strategy.

“COVID was an accelerant to move a lot of technology forward.”

While telemedicine proved its value while speaking with patients outside of the hospital setting, Mazzarelli said a real-time dictation platform helped tremendously with those in the hospital.

The Dragon Ambient eXperience, known as DAX, is an ambient clinical intelligence solution, created by Massachusetts-based Nuance Communications. It allows clinicians to complete their clinical documentation simply by using their voice. They could go from location to location in the hospital, using only their phone in the process.

The system “listens” to the doctor and patient interact, and then uses artificial intelligence to create a note to document the visit according to regulatory purposes, as well as for billing and for best practices.

Nuance officials said DAX extends the proven power of its Dragon Medical program (used by more than 500,000 physicians globally) with the latest AI-powered advancements to create a fully voice-enabled and ambient exam room environment that works for a number of medical specialties.

Mazzarelli feels it is revolutionizing the physician-patient relationship — while improving care.

“It allows the physician or the advanced practice provider to do something that we’ve gotten away from in medicine, which is to look the patient in the eye and really focus on them,” he said. “To really have that interaction be about the patient and not have there be some kind of multitasking going on with charting or writing things down.”

Mazzarelli said Cooper was one of the first health care systems in the nation to introduce DAX on a wide-scale manner.

It first deployed DAX in 2020 to clinicians at three ambulatory care centers in orthopedics and primary care. The hospital system is now expanding the use of DAX to physicians and advanced practice providers in approximately 90 locations in more than 20 additional specialties.

“It thinks about what you’re saying, and then puts it in the right regulatory places in a chart,” he said. “It interprets words into the kind of format you would put into a medical note.

“So, it’s actually thinking for you. That’s what makes it different than a medical scribe or anything like that. It’s actually doing some of the organizing that takes that cognitive burden off those who are seeing patients.”

Mazzarelli said focusing on the patient creates a better doctor-patient relationship, improves outcomes and ultimately creates efficiency, which lowers costs. He said it also reduces burnout for those that provide care, because it considerably reduces paperwork.

“Most physicians would say that they see patients for free, and they get paid to do paperwork,” he said. “It takes that pain away, and lets them really, really focus on patients.”

Any concern that such technology potentially could cost jobs is unfounded. Mazzarelli said quite the opposite is happening.

“This will do less of eliminating people’s jobs and more to actually give back a physician’s normal amount of time, while at the same time, improving their experience with their patients,” he said. “It is eliminating pajama time — the time physicians spend late at night or early in the morning going back into their charts to finish their documentation.”

While the pandemic certainly pushed more technology on health care workers, Mazzarelli feels the DAX system is one no one will push back on.

“We believe in it so much,” he said. “We want to partner with Nuance because we think this is such a big part of the future. We see this system as the future. And I think, in 10 years, no one will write notes anymore.”