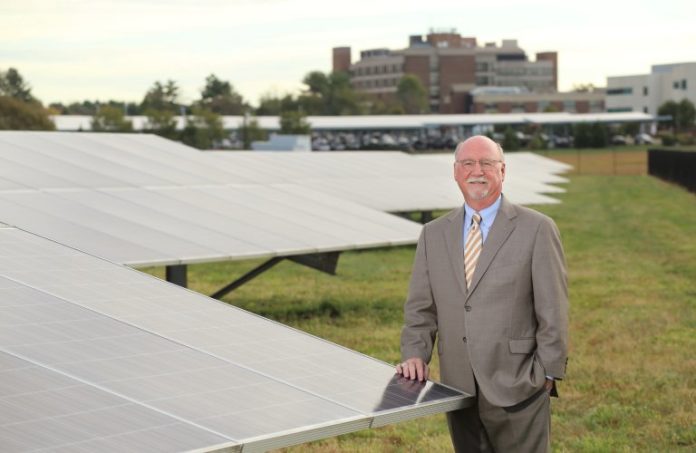 John Gribbin, the longtime head of CentraState Healthcare System, joked that he could sum up the role of the Freehold Township-based health care provider just by talking about its 284-bed medical center and its state-of-the-art Star and Barry Tobias Ambulatory Campus that’s right next door.

“We try to teach the community that, if they spend time in one building, we just might keep them out of the other,” he said.

It’s an easy line, but it cuts to the heart of everything a community hospital should be — everything Gribbin has spent more than two decades helping to establish at CentraState.

“The hospital was a place you came when you were sick. We wanted to create the idea that a four- or five-day stay in the hospital should be viewed as a temporary interruption in our relationship.

“When we decided to construct the Star and Barry Tobias Ambulatory Campus more than 10 years ago, it was with the idea of housing our ambulatory-type programming, health awareness center, diabetes center, physical medicine, a public fitness club — those types of services. That was the relationship we wanted to build in the community.”

Gribbin, who came to CentraState in 2000 — and has been in the health care industry for 47 years — is retiring. He has begun telling staff and community members, and will officially leave in the first week of April.

The system already is benefiting from the unique partnership with Atlantic Health System that started Jan. 1 (one where Atlantic has become the majority corporate partner). And the pandemic appears to be (fingers crossed) winding down again.

Gribbin, who will continue on as a consultant, said it’s time to turn more attention to traveling with his wife, spending time with his grandkids — and maybe a little golf.

He spoke with ROI-NJ about CentraState, its partnership with Atlantic Health and the future of health care. Here’s a little more of the conversation, edited for space and clarity.

ROI-NJ: Let’s start at the beginning. Or, actually, the midpoint of your career, when you came to CentraState in 2000.

John Gribbin: CentraState had its challenges in the ’80s and ’90s. There were a lot of things that were problematic. There were tensions between the medical staff and the administration. The board was not happy with the direction things were going. It was a challenging time. But CentraState, being where it is, was always a bit of a jewel. It just hadn’t quite lived up to its potential.

I was asked to come over and put us on a different course. And, over the years, I think we’ve done that. We’ve built a very strong relationship between and among our board of trustees, and we’ve worked very hard to develop stronger medical staff leadership and bring in talent where and when we could.

ROI: Talk about the role of primary care — which obviously is of great importance to you.

JG: I’ve always felt that primary care medicine is the key to creating healthier communities. That’s not to neglect specialty services. They are important, too. But they are connected. For example, we felt we needed to strengthen oncology, because oncologic services have a lot in common with primary care. Increasingly, cancer is becoming a chronic disease, as people are living years with a diagnosis.

And we went into teaching, which is unusual for a community hospital. But we felt that family practice was the quintessential primary care. So, we developed a residency program with Rutgers that’s now in its 17th year. We graduate six new doctors every year and put them into the community. We hope to expand upon that now with our relationship with Atlantic Health.

ROI: Talk about the relationship with Atlantic Health. For starters, how did you get to the point of looking for a partner after being an independent hospital since you opened in 1971?

JG: The OMNIA situation six years ago was kind of the canary in the coal mine. (For those who don’t recall, the tiered method of Horizon Blue Cross Blue Shield of New Jersey’s new health plan caused much concern — and lawsuits — for hospitals that were considered Tier 2, as CentraState was.)

That was an indication that the geography that we enjoyed here in western Monmouth County was no longer quite the protection, or the equalizer, in our negotiations with insurance companies. That’s what led us through a process that took close to two years. We really grappled with those issues and figured out who would be the best partner.

When we met people from Atlantic Health, it was clear very quickly that they shared our values and our vision for the future. And they needed a partner down here as much as we needed a larger partner ourselves. It has worked out beautifully, even this early into it.

ROI: Talk about the benefits of the Atlantic Health partnership?

JG: They are changing our entire electronic health information system, which we had to do anyway. And they are doing it in the next 30 days. This will make clinical data more accessible and more transportable to the consumers. Virtually every hospital surrounding us will be on the EPIC system, so that’s a big boon for people in our community. They’ll see that over the next year.

With Atlantic’s help, we were able to recruit an outstanding director of oncology (Dr. Alexander Itskovich). He will help us take the Statesir Cancer Center to the next level.

We now have a full risk-diagnostic lab here for cardiology. And — probably within the next year — we will be seeking to the ability to provide emergency angioplasty to our community. That’s something our community didn’t have access to.

Atlantic Health wants us to continue down the path that we’re on, because they also believe that the future lies with improved access — and different access points for the community. Over the next year, I think the community will recognize that we’ve aligned ourselves with an organization that’s considered among the best in the state.

ROI: Let’s talk about over the next year — or over the next 10 years. As someone who has seen so many changes in the sector in his professional life, how do you see health care evolving?

JG: We need to meet community members where they are. In the future, it’s going to be about more access — and with a sharp eye toward affordability. Health care is too expensive, it’s as simple as that. We’ve got to find ways to change that. One of the ways to do that is by increasing access.

I think the major investments that you’re going to see going forward are going to be about linking together providers in settings outside the hospital and working with a much greater emphasis on keeping people healthy.

It’s going to depend, in no small degree, on the consumer taking more control of their decisions. But, our obligation is to help lead them to the right decisions in the right sectors.

I worry about places that are putting major new dollars into bricks and mortar. I don’t think that’s really where the industry needs to be in the future. We need to pay far more attention to the providers and the programs, and where they’re provided — more so than creating new monuments to acute care.

JG: It’s a major shift, but I think that’s better for this country. We’re never going to solve the affordability issue if we continue just plowing money into bricks and mortar.

JG: We’re starting to get into an era where the data can lead us into the pockets of inequities, enabling us to deal with those communities better than we ever have before. We’ve never had enough insight into where the real need is; we’ve always been far more reactionary.

The metadata and Big Data that we talk about now will revolutionize how we plan our services in the coming years. We’ve never had that capability in the past. This was one of the things that intrigued us about Atlantic Health. They’ve got a lot of impressive people in that arena. So, we hope to leverage that in our community so we can put assets where they need to be.

ROI: We’ve looked forward. I’m going to give you one more chance to look back. Do you have a favorite moment in your two decades at CentraState?

JG: I think there are two. Opening the ambulatory center (in 2007), putting us on that path, was an important statement to the community. But I think an equally important statement was the day we graduated our first class of residents in the teaching program (also in 2007). That was special.

ROI: Last question: You’ve started to say your goodbyes. How has that been — for the staff and for you?

JG: It’s been very emotional for both of us. There’s certainly a bittersweetness to it. You recognize it’s the right decision, but I’ve been doing this for 47 years — it’s a little hard to envision what it’s going to be like afterward.

The response from the staff has been very gratifying. They are sad, but also understanding and happy for me.

No matter what you do, you always want to leave an organization in a better place than when you arrived. And I feel I’ve done that.