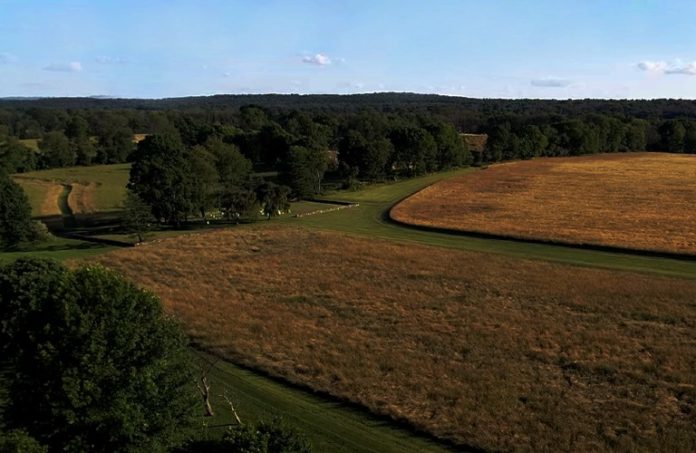 The family of the late philanthropist Betty Wold Johnson has gifted her nearly 800-acre, historic Hopewell farm to the D&R Greenway Land Trust. The donation is one of the most substantial land gifts in New Jersey’s history.

The trust, a leading conservation nonprofit dedicated to preserving and caring for land across central New Jersey, said that, with this exceptional gift, D&R Greenway begins 2022 with more than 22,000 acres of land preserved in New Jersey.

The matriarch of the Johnson family spent four decades assembling individual properties to create her farm, with a goal of protecting and permanently preserving its views and ecology, because she was concerned that New Jersey, the most densely populated state in the country, was running out of open space. This gift secures a greenbelt on the northern edge of Hopewell, where she was legendary for her generosity and community involvement.

The property sits high on a hill with sweeping views across the Hopewell Valley and holds great ecological value for birds and wildlife. Larger in size than Hopewell Borough, most of the land is in Hopewell Township and 10 minutes from Princeton. It contributes to the region’s inclusion in the Crossroads of the American Revolution National Heritage Area, so designated for its Revolutionary War-era historic significance.

“We are inspired by the family’s confidence in D&R Greenway as we announce this historic land gift from Betty’s family,” said Peter Dawson, chair of D&R Greenway’s board of trustees. “In choosing our organization as the keeper of this legacy, the family is honoring Betty Wold Johnson’s commitment to preserving land.”

Betty Wold Johnson’s sons, who made this gift, are Robert Wood Johnson, the former U.S. ambassador to the U.K. and co-owner of the New York Jets football team, and Christopher Wold Johnson, American businessman and Jets co-owner.

“We are pleased and proud to donate this special property in honor of our mother,” Robert Wood Johnson and Christopher Wold Johnson said in a joint statement. “She loved Hillside Farm as much as she loved the Hopewell area, and she would be thrilled that the land will be preserved for future generations to enjoy.”

The property includes forests, meadows and agricultural land, with a tributary stream to the Stony Brook, a state-designated high priority waterway. While the property is currently closed to the public, D&R Greenway plans to take a thoughtful, strategic approach to determine how best to carry out Betty Wold Johnson’s vision for the property before opening some of the land for public access.

Casiello named to executive committee of Center for Real Estate at...