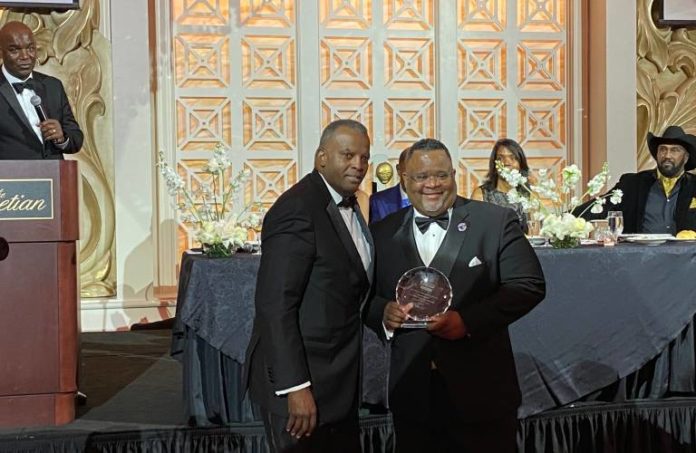 And, while he stressed the importance of remembering the past — “Those who have no record of what their forebearers have accomplished lose the inspiration which comes from the teaching of biography and history” — he challenged those in the room to act today for a better tomorrow.

“We are the ones we have been waiting for,” he said, quoting an idea that has been shared by many over the years.

Repollet challenged the overflow crowd of nearly 500 (and hundreds of others were turned away) to confront obstacles of oppression — even if it comes at a personal loss of power, privilege or prestige.

He called it the third path of action in such circumstances, one that is better than the other two options: retreating from the fight or passively accepting the status quo.

He quoted King: “The ultimate measure of a man is not where he stands in moments of comfort and convenience, but where he stands when times are challenging and controversial. The true neighbor will risk his position, his prestige and even his life for the welfare of others.”

Repollet said everyone in the room understands the importance of living their lives on path three.

“That’s what the third path is all about, confronting obstacles and enduring discomfort to instigate real change,” he said. “We must ask ourselves what it’s meant to be on that third path in today’s world.

“Are we truly ready to confront our obstacles head on and take risks, even when it is uncomfortable? Will we risk our position and prestige to be good neighbors? What actions do you commit to be on that third path?”

One is supporting Black-owned businesses, he said.

“When you are filing your taxes this year, look at how much you spent in supporting Black-owned businesses,” he said. “That’s your challenge.”

Another is using social media as a force for change.

“Social media is not just about having a tweet go viral or sharing everything you see on Instagram, it’s shaped how we protest,” he said.

He said the tried-and-true methods of economic boycotts still are effective, too.

The point, Repollet said, is to be active.

“Our ancestors didn’t sit on the sidelines talking about it; neither should we,” he said.

The African American Chamber of Commerce of New Jersey honored numerous dignitaries last week at the gala marking the 15th year of the organization. A look:

The result will be a better world — and a better economic situation — for all, Repollet said.

“This is about cultivating an economy that propels an entire country forward,” he said. “The American economy cannot function without African Americans. Never has, never will.

“We must shift from a system that benefits from African American labor through exploitation to a system where we are full, equal participants in a blind economy.”

Repollet said the fight is nothing new — and is the result of hundreds of years of oppression. Among other things, he pointed to the Homestead Act of 1862, an act intended to help Americans move and build communities west of the Mississippi, but one in which Blacks received less than 1% of the 270 million acres that were transferred to 1.6 million people.

“Now, tell me, how can a bootless man pick himself up by his bootstraps?”

“While we celebrate Black billionaires and high-profile success stories across industries, we have a moral obligation to ensure that more than a blessed few of us ascend to the highest heights — that more of us achieve economic stability and that all of us have at least enough to get by,” he said.

“The future is about policy and partnership. Economic impact can be felt through policy, procedure and practice. We have that duty to elevate others.”

He called on the crowd to do just that.

“This is our time,” he said, quoting the theme of the event.

Shané Harris: How businesses can do more than simply checking a box

Giovanna Aguilar: Time to speed up some industries’ DEI initiatives

Politics
ROI-NJ Staff -
June 29, 2022
The New Jersey Legislature passed the state's $50.6 billion budget Wednesday, with both the state Senate and Assembly voting to send the plan to...

Food & Hospitality
Linda Lindner -
June 29, 2022
The Meet AC Atlantic City Airshow announced its civilian acts, which will take to the skies above Atlantic City’s beaches on Aug. 24. What...