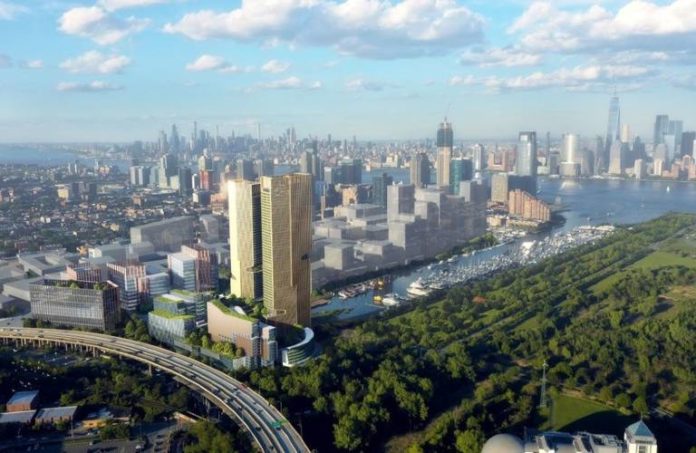 Progress is well underway at a 13-acre, mixed-use campus in Jersey City that biotech industry leaders anticipate will bolster the Garden State’s stature as a life science and medical innovator.

That’s the still-in-the-works nexus for life sciences and innovation called the Cove. The collaborative project by Argent Ventures and H&R REIT — backed on the design side by Ennead Architects as designers and the marketing and leasing side by Nancy J Kelley + Associates — aspires to transform an urban site into a flagship destination for regional laboratory spaces and commercial life science offices.

Oh, and they’re pairing it all with an almost equally large residential development and an even larger waterfront park — to bring to life the oft-discussed live-work-play community of the future.

It’s a heavy lift. But Kelley said the Cove’s development team is on track to complete key infrastructure improvements this year “and perhaps break ground on our residential tower as well” by the year’s end.

“Since announcing this project last April, we had a launch event in September that was well attended, we had the Governor’s Office, the mayor’s office and all the life science companies in Jersey City coming together to talk about building a cluster there,” said Nancy J. Kelley, CEO and president of Nancy J Kelley + Associates.

In the meantime, Kelley said the firm has had many conversations with academic institutions and other institutional players to provide an anchor for the development — as well as for-profit companies interested in being part of an innovation community like this.

“This will unfold over seven to 10 years, depending on how fast interest in leasing goes,” she said. “It’s a large project that will proceed in phases. It’s something that will last quite a while.”

The redevelopment of waterfront parcels at the southern edge of Jersey City’s commuter-connected downtown quadrant, next to Liberty State Park, was one of the components of the Grand Jersey Redevelopment Plan, introduced five years ago.

What this project intends to bring to the site, at least in its first phase, is two academic and laboratory facilities as well as a commercial life science building. The second phase will add another two combined laboratory-office structures. In all, there will be 1.4 million square feet of life science-friendly office and research space.

The mixed-use campus will also feature 1.6 million square feet of residential space. Additionally, the Cove will introduce a 3.5-acre public park to the waterfront community.

The pandemic hasn’t drastically affected the design of the development, which was always — fortuitously — envisioned as having a mix of indoor and ample outdoor spaces, Kelley said.

What has changed in the past two years is Jersey City itself, Kelley said, giving a nod to new developments that tie into the local life science and medicine scene.

Kelley had one favorite among the recent developments: The $300 million, 12.5-acre SciTech Scity campus. Liberty Science Center, adjacent to that new construction, broke ground in October on the project, which aims to attract and grow science and technology companies.

“You’ve also had NJIT announcing their partnership with Ben-Gurion University to create a new institute for future technologies, the Pompidou Center announced plans to open its first North American satellite in Jersey City, there’s been a lot of new international companies taking space in the area, as well as a host of startup companies,” she said.

It’s all evidence for Kelley that the Jersey City life science industry that the Cove will participate in is evolving by the day.

Biotech industry advocate Debbie Hart said the unveiling of the Cove comes on the heels of a major complementary project to the south: New Brunswick’s the Hub, a site bringing together tenants such as Rutgers University, Hackensack Meridian Health and RWJBarnabas Health. Hart considers that development, slated to open in 2024, another potentially bustling life science ecosystem in the state.

Between that and the Cove, Hart expects New Jersey is positioning itself in just the right way to foster the industry that she champions as CEO and president of BioNJ.

“We want to make sure that New Jersey is a robust life science ecosystem, and nothing speaks to the increasing robustness of that ecosystem than a brand-shiny-new development like this one,” she said. “It’ll be enormous and multifaceted — and exactly the kind of dynamic environment and central hub that we’ve all been hoping for in the state.”

Hart acknowledges that New Jersey’s biotech sector is regularly in a compare-and-contrast situation with Boston and other growing hubs for the life sciences. In that regard, projects such as the Cove, in her view, will only strengthen the Garden State’s standing next to those peers.

“While we have our own unique ecosystem for life sciences here, with plenty of talent, companies and the support of state government and the industry around it, the vision is that this will position Jersey City much like Cambridge,” she said, adding that means having “somewhere you could easily walk to meet venture capitalists in local cafes or in the square.”