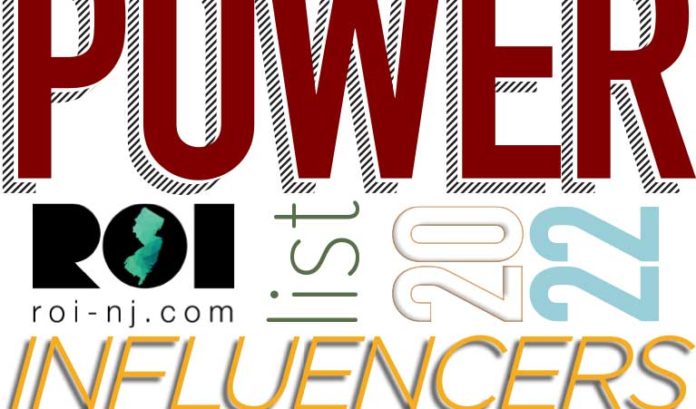 Here’s the secret sauce that helps make the ROI Influencers lists so legitimate: We don’t actually pick the people.

Sure, it’s fair to say we ultimately make the calls on who is on and who is off, but all of those decisions are based on the opinions and insights of leading figures in the state. This year, ROI-NJ consulted with more than two dozen insiders — it’s the best way to keep the list current and fresh.

So, if you find yourself on the list for the first time (and approximately 25% of the honorees are first-timers), know this: Your colleagues and competitors got you there. In a state whose business climate can be as rough and tumble as any, know that the top players are not hesitant about recommending their top competitors if they feel they have been overlooked. It’s honorable. And refreshing.

How to nominate an honoree

If you want to nominate someone for our upcoming lists this year, please send 25-50 words why to Editor Tom Bergeron at tbergeron@roi-nj.com. And, if you can, include a head shot, just in case they are selected.

Since we are a business journalism platform, the list is meant to recognize those who are most influential in the business world. Because the state’s business community is so closely tied to government, there are plenty of elected (and appointed) government officials, too.

But, to be clear, this is about more than revenue figures. While the top-earning companies certainly get a strong look (they are doing well for a reason), special consideration is given to those who have a strong purpose of giving back to their profession and the people in it.

And, since New Jersey is well on its way to becoming a majority-minority state, we actively search for those from underrepresented communities — and those trying to lift up underserved communities.

The Power List is our annual kickoff to our Influencer lists. It obviously is meant to recognize the top people overall — and in 14 individual categories. But know that many of those individual categories will be expanded in number for their own lists later in the year (categories such as Real Estate, Health Care, Higher Education and Technology).

This month marks the overall Power List encompassing all sectors in the state. Greatly expanded individual lists will come out in the months ahead. Here’s what is on the schedule: