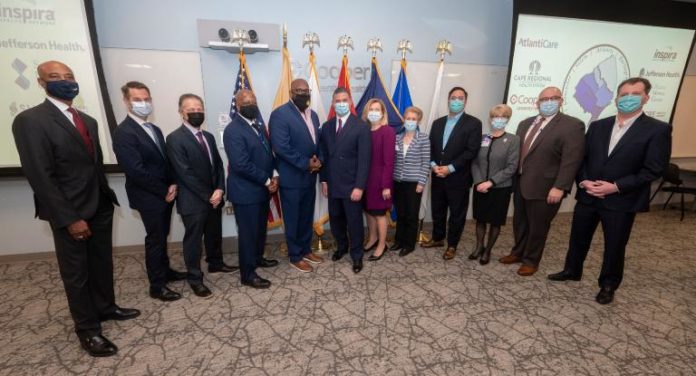 The numbers already were surprising — and staggering.

Health care workers — those who have pledged to assist others — were five times more likely to suffer a workplace violence injury than any other profession. And this was before the pandemic.

The past two years only have increased the issue. A survey of more than 5,000 registered nurses in September 2021 found that 31% of those working in hospitals faced an increase in workplace violence – up from 22% earlier in the year.

Elected officials in South Jersey are moving to do something about it.

The aim is to protect health care employees by increasing penalties for those convicted of threats or violence against health care workers.

The measure establishes threats against a health care professional or any worker at a health care facility as a disorderly persons criminal offense, which would be punishable by imprisonment of up to six months and/or a fine of up to $1,000. The bill also calls for additional penalties for assault against these employees by allowing courts to mandate an anger management course or 30 days of community service for defendants.

“If we’ve learned anything from this pandemic, it is that frontline health care workers truly are selfless heroes,” he said. “At the end of the day, these heroes are just people who want to feel safe when they go to work.

“Yet, during the pandemic, we’ve seen a rise in attacks against health care workers, making it both difficult and dangerous to do their job. This proposal will strengthen protections for these frontline workers by enhancing penalties and awareness about violence the workplace.”

“For two years, our nurses, doctors and health care professionals have been on the front line of the COVID pandemic — often putting their own health at risk,” he said. “Sadly, this figurative battlefield has turned literal, with people physically assaulting these essential workers. This is simply unacceptable. This proposal will send a clear message that our health care workers must be treated with the respect, decency and civility they deserve.”

The proposed legislation is already supported by numerous legislators and health care system leaders throughout New Jersey. Key leaders in South Jersey were at the announcement.

“The leaders of South Jersey health systems are unified in support of this legislation to protect our teams from the growing number of violent encounters in health care facilities,” Kevin O’Dowd, co-CEO of Cooper University Health Care, said.

“Many of my emergency medicine physician and nursing colleagues across the country have seen too many unfortunate violent incidents against our coworkers,” he said. “We hope this legislation will work to deter violent behavior in settings dedicated to care and healing.”

Inspira Health CEO Amy Mansue said everyone needs to be involved in the issue.

“We are grateful to Assembly Majority Leader Greenwald and state Sen. Singleton for taking action to address violence against health care workers,” she said. “As they work to pass legislation, health care leaders around the country are providing their teams with the training, tools and resources needed to reduce the risk of violence in the health care setting,”

Virtua Health CEO Dennis Pullin, who wrote an inspiring Op-Ed on the issue, was happy to see steps are being taken.

“Rising violence against health care workers is one of the underreported consequences of the pandemic,” he said. “In fact, we’ve reached a point in which many workers view threats and acts of aggression as ‘just part of the job.’

“This is unacceptable and we, as a community, must take a stand to protect all people who dedicate themselves to careers in health care. Legislation to provide health care workers with extra protection is the least we can do in exchange for their service and sacrifices over the past two years, and long before.”

Dr. Tammy Torres, CEO of Salem Medical Center and also a physician, said the act will go a long way toward ensuring basic workplace safety can be assured.

“Passing the Health Care Heroes Violence Prevention Act shows respect and honor to doctors, nurses, techs and all workers in the health care field,” she said.

Joseph Chirichella, CEO of Deborah Heart and Lung Center, summed it up this way.

“We have asked so much of our health care workers,” he said. “It is essential that we guarantee them a safe place to work.”