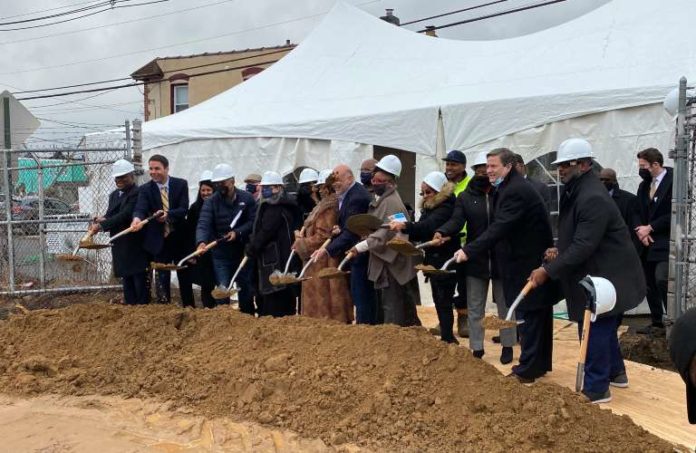 Camden Mayor Vic Carstarphen spoke about how he went to school right across the street.

Camden County Commissioner Al Dyer shared how he fell off his bike as a kid just feet from where he was speaking — he said he still has the scar to remind him.

U.S. Rep. Donald Norcross (D-1st Dist.) told how he grew up not too far away in Pennsauken and worked just blocks away.

The personal anecdotes detailed why the groundbreaking Friday for the first phase of the $145 million Ablett Village development in Camden was more than just the beginning of the transformation of the oldest public housing community in the city.

Local officials said the investment should be viewed with a broader lens — as an investment in the community, in its residents and in the city of Camden. And it’s coming from people who know the area intimately.

Nick Cangelosi, vice president of Michaels Development, summed it up with an old saying: “When we dream alone, we simply dream, but when we dream together it becomes reality. And with everybody in this room today … our dreams become reality,” he told the large gathering of residents and dignitaries.

His words were true throughout the event — as every local official in attendance spoke of how they worked together and played a role in seeing this opportunity come to life.

Carstarphen thanked “Team Camden” and all the residents, government and local officials and Michaels Organization executives — and spoke of how this team came together for the greater good of the community.

That greater good involves the commitment from the city and other partners who are firmly reinvesting in the community and seeing to an improved quality of life for all residents. The city already has invested more than $400 million in housing.

Norcross, who has been instrumental in bringing funding to Camden communities, said it’s what working together really means.

“This has been an incredible journey with a lot of different projects going on, and that’s what working together really does,” he said. “It brings us different resources and gives us great resources.

“I was proud to work alongside the community to advocate for the funding for Ablett Village. Everyone deserves an affordable, safe place to call home and access to good-paying jobs.”

It is another example of how public and private resources are being leveraged to improve Camden’s neighborhoods, the officials said.

Dyer, who grew up in the community and now lives in nearby Pennsauken, was emotional when he spoke about East Camden because of public housing. It is an issue he speaks about from experience, and knows it is needed to improve the quality of life for the people of the community. And to give them hope for their future.

“This groundbreaking will mark a life-changing investment into a community that I was born and bred in and one that has given me and my family so much,” he said. “Ablett Village is near and dear to my heart and was a place I called home for several years as a kid. That said, I’m excited to see this transformation take place as we move forward with generational change in East Camden.”

The groundbreaking was the result of the efforts of the U.S. Department of Housing and Urban Development, the Housing Authority of the City of Camden, the New Jersey Housing and Mortgage Finance Agency and the Michaels Organization. It represents the first of four phases for the redevelopment. Known as Cramer Hill Family, it will bring 75 new townhome-style affordable homes spread across three separate sites in East Camden.

The following three phases of development will bring an additional 350 homes, for a total of 425 mixed-income, energy-efficient homes to replace the current 306, as well as numerous amenities:

Cramer Hill Family is scheduled to be completed by March 2023. The second phase, which will include 55 age-restricted homes located off-site, is expected to begin in September 2022.

Carstarphen said he’s eager to see it all come together.

“This is no ordinary redevelopment,” he said. “By the time construction is finished, not only will Ablett Village residents have beautiful homes, but all Cramer Hill residents will have safer and more convenient transportation access, exciting economic opportunities and a greater sense of community. And Cramer Hill Family is just the beginning — just wait until you see what else HACC and the Michaels Organization have in store.”