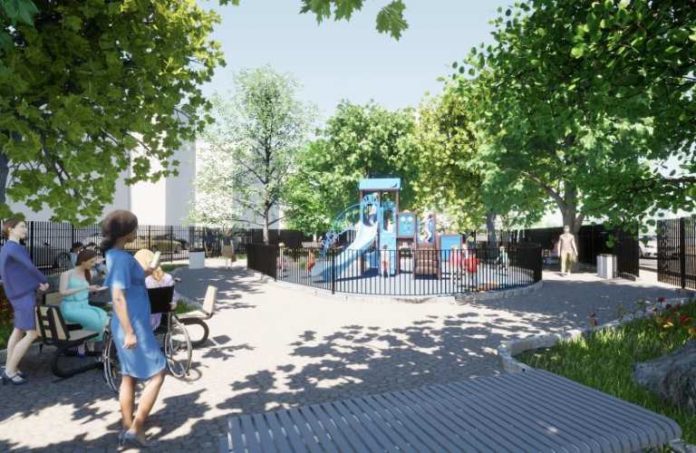 The Jersey City council unanimously approved a plan to expand the new community-driven Fairmount Square Park by 40% with the acquisition of an unsightly car storage lot.

The new Fairmount Park will fully incorporate the surrounding street space — at the intersection of Fairmount and Summit avenues — to create unified park space, including a sidewalk around the perimeter and a pedestrian traffic signal to allow families to cross safely at nearby intersections. Additionally, eliminating the cut-through streets will improve traffic safety by reducing the number of conflict points between pedestrians and motorists.

City officials said the city was in negotiations for larger development when the city engaged the property owner with the intention to expand and preserve open space. City officials also said the property owner is a lifelong Jersey City resident who recognized the inherent value of transforming the lot into an extension of the new Fairmount Square Park for the community’s benefit.

The Fairmount Square Park renovation design was developed with community input to include playground equipment and permanent infrastructure with new tree plantings, seating, restriping pedestrian crosswalks, fencing, landscaping, a flagpole and other elements being installed this year for residents to safely enjoy in the newly established public space.

The plan was pushed by Mayor Steve Fulop and the Jersey City Parks Coalition, who said it will promote physical and mental activity outdoors.

“After hosting numerous community meetings and surveys, this transformational park is the latest example of how we continue to look for ways to help neighborhoods in all six wards meet their fullest potential by listening to the residents’ needs and turning their input into actionable steps to improve the community and quality of life overall,” Fulop said.

City officials said the process of the entire park improvement project, from start to finish, will be published by Blue Zones to be used as case studies for what other municipalities around the nation can do to achieve similar success.

The Fairmount Square Park project aligns with the city’s broader efforts to expand and improve neighborhood parks for all Jersey City residents. Through the first allocation of Jersey City’s Open Space Trust Fund, enacted under Fulop in 2016, over 20 additional park improvement projects spanning the city are underway or already completed.

Business is heating up: Suppliers of building products — think HVAC...