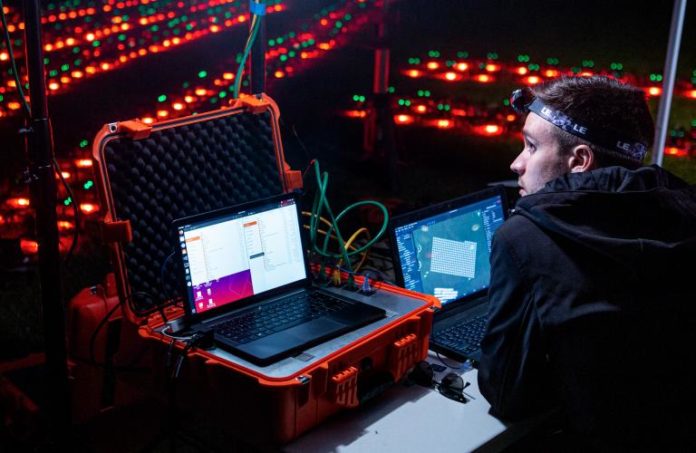 On a recent, chilly midnight, hundreds of drones lifted above Rowan University’s West Campus in tightly synchronized formation, their brilliant LED bellies filling the sky with color-changing patterns. Scattered on the athletic fields below the buzzing quadcopters, a handful of spectators erupted in cheers.

At that moment, it was the largest demonstration of the proprietary drone swarm technology developed by Philadelphia-based Verge Aero, a startup company flying complex aerial light shows for audiences around the world. (Watch video here.)

Except, this time, the company’s engineers and co-founders were back on their home turf.

Since launching their business in 2016, three Rowan University alumni — Tony Samaritano, Chris Franzwa and Anthony Merlino — have maintained close ties to the southern New Jersey university that gave rise to their company: borrowing space to use as a test site, recruiting undergraduates as interns and exchanging ideas with faculty.

“This is what a Rowan engineering education can do,” said Dr. Giuseppe R. Palmese, dean of the Henry M. Rowan College of Engineering. “Our small classes and hands-on, real-world clinic projects are designed to inspire our students to use their imagination and aim high. Verge Aero is a prime example of the impact we make.”

“To be able to see that they have taken a concept that started as a course project while they were students in our program and built this, literally from scratch, one drone at a time, is an immense point of pride for us,” Polikar said, “and represents the best of what our program offers.”

Abandoning promising industry careers in favor of their entrepreneurial goals, Verge Aero’s engineers spent years programming the system’s back end, so they could quickly design and produce intricate shows on the fly with just a small crew.

“They’re like high-tech fireworks,” said Samaritano, who earned his bachelor’s and master’s degrees in electrical and computer engineering in 2012 and 2018. “We can dynamically build shapes in the sky and spell out logos — and we do this for some of the biggest names around the world.”

Indeed, when Joe Biden celebrated his presidential win in Delaware on Nov. 7, 2020, the fireworks display featured patriotic graphics emblazoned on the night sky by 200 drones piloted by Verge Aero. The company’s drones have flown at festivals including Burning Man in Nevada and Carnaval in Mexico, as well as concerts and shows hosted by well-known companies.

On the test date, Rowan students spent hours setting up blinking drones, lining them up in a grid pattern on the grass. When the drones launched, they cheered and marveled at the technical feat hovering overhead.

A few weeks later, Verge Aero successfully flew a 600-drone show at the Electric Daisy Carnival in Las Vegas. In February, Verge Aero earned a spot on the season finale of “America’s Got Talent: Extreme.”

The company’s engineers credited their success to the educational foundation developed at a fast-growing public research university in southern New Jersey.

“Without Rowan, I wouldn’t have had the confidence to be able to build a company from scratch,” Samaritano said.

“I think of a lot of schools where you’re sitting in a lecture hall filled with hundreds of people and you’re struggling to get lab time,” Franzwa added. “Here, I was able to just work as much as I wanted.”

Merlino appreciated Rowan’s clinic classes that gave him the freedom to feed his interests and curiosity — and allowed him to create something new.

“Theory’s great, but, at the end of the day, the thing that builds companies is practical, hands-on stuff,” Merlino said.

As more Rowan students roll up their sleeves and get down to work, the potential for solutions and discovery abound.

“Hands-on, cross-disciplinary projects result in interactions that spur creative thinking and problem-solving,” Palmese said. “Seeing an innovative and successful company arise from our educational efforts is rewarding to our faculty — and it’s a testament to Mr. Henry Rowan’s legacy.”

Need experts, space, resources and/or people? A Top 100 national public research institution, Rowan University focuses on practical research at the intersection of engineering, medicine, science and business, while ensuring excellence in undergraduate education. Tell us how we can help you by emailing engage@rowan.edu or calling 856-272-2917.