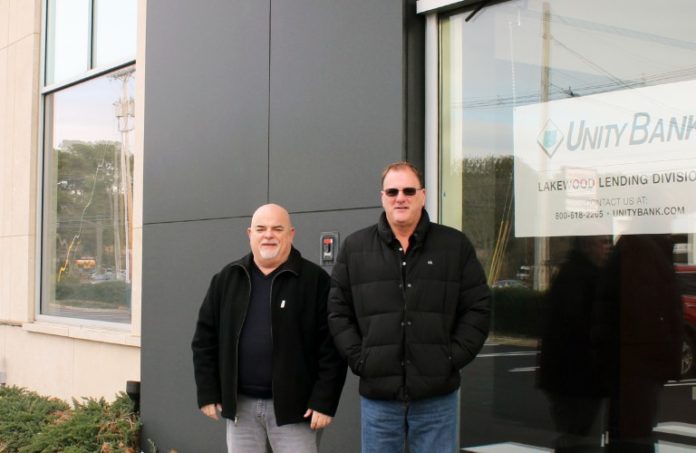 The bank’s new Ocean County facility is located at 1255 Route 70 at the intersection with Airport Road, Unity’s southernmost office location.

“We have seen tremendous growth in our loan portfolio in Lakewood over the last couple years, particularly in commercial lending,” said Unity Bank CEO and President James Hughes. “Population growth and other marketplace factors have contributed to the growing demand for financial services in the community. We are expanding our commercial and residential lending team in Lakewood because we are committed to meeting the community’s demand for banking services.”

According to the 2020 U.S. Census, Lakewood was New Jersey’s fastest-growing municipality in the past decade and is now the state’s fifth-largest city. Lakewood’s population soared 46% over the past decade, increasing from 92,843 residents to 135,158. Much of the dramatic growth has been attributed to an exodus of people from New York City to Ocean County.

“The first loan I managed in Lakewood was back in 2017 for a laundromat,” Strauss said. “Mostly by word of mouth, the volume has increased dramatically from that point, everything from office buildings to campgrounds, and the business opportunity continues to grow. We have enjoyed working with Lakewood residents and that is why the bank is expanding in the area.”

Unity has leased a freestanding building in a strip mall for its Lakewood team. The approximate 1,800-square-foot space, previously operated as a bank branch by another financial institution, provides room for expansion.

In addition to the Ocean County office, Unity Bank provides financial services to retail, corporate and small business customers through its 19 retail service centers located in Bergen, Hunterdon, Middlesex, Somerset, Union and Warren counties in New Jersey and Northampton County, Pennsylvania. The bank holds about $2 billion in assets and $1.7 billion in deposits.