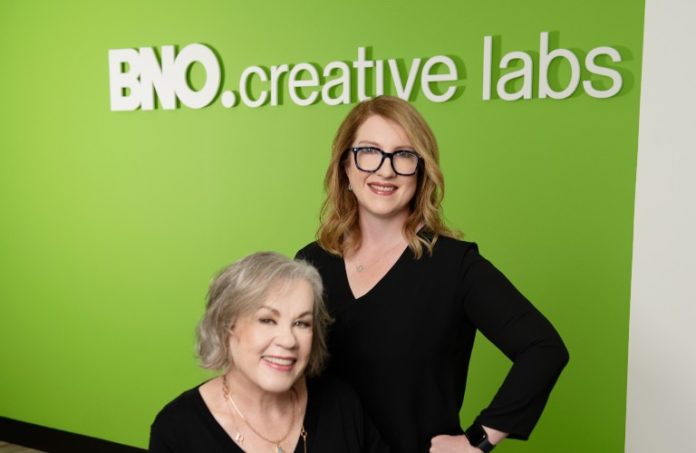 Baldwin & Obenauf said that, after 40 years at its helm, founder and namesake Joanne Obenauf has named a new CEO. Trista Walker officially takes the reins of the Somerville-based creative agency on Tuesday.

Obenauf will continue serving as board chair as she passes the torch to Walker, who adds CEO to her current title of president.

“We have been thoughtfully developing this succession plan for several years,” notes Obenauf, who wanted to ensure a smooth transition and continued success for BNO as a women-owned agency. “I’m confident that Trista and our talented management team will lead BNO through its next phase of its growth, as I transition to my new role as board chair.”

Obenauf established herself as a leader in the male-dominated world of marketing long before the development of a national standard for women-owned business certification. In 1981, she joined forces with Mark Baldwin to create a marketing services agency to serve the booming businesses that, like her, chose to plant their headquarters in the Garden State. From a staff of three in year one, BNO currently boasts more than 75 employees, three offices and a client roster that includes powerful brands like Verizon, Bristol-Myers Squibb, Aramark, Mastercard, Nike and Johnson & Johnson companies Ethicon and Janssen. Johnson & Johnson is the agency’s longest client partnership, dating back 40 years.

Recognizing her success as a business leader, Obenauf often credits authenticity as “the secret sauce” for her business success, a quality that has fostered a winning company culture while attracting and retaining clients.

Obenauf’s entrepreneurial vision, passion for excellence and energy have provided a strong foundation for BNO, and, after decades growing the agency, she continued to attract and support women entrepreneurs as fuel for agency growth. In recent years, this growth has included new levels of revenue, substantial client growth, launching new capabilities and expanding to new geographic territories.

“The success of BNO rests on Joanne’s shrewd ability to listen to what clients need and fearlessly evolve the company’s strategy to remain a step ahead,” explains Walker, “which has included making smart investments in new technologies, services and, most importantly, people.”

An entrepreneur herself, Walker founded Blue Flame Partners, a multidimensional marketing agency, prior to joining BNO. In fact, she originally engaged BNO to partner with her firm on a large design project for the USDA and, loving the energy and creativity at the agency, agreed to join forces. She also previously served as senior vice president of client services for Compass Healthcare Marketers.

With experience in industries spanning life sciences and health care, financial services, consumer, government and media, Walker served as chief marketing officer for BNO, quickly ascending to president in 2014, and now adds the role of CEO, rising in parallel with historic growth at the agency.

In addition to her role at BNO, she serves on the board and executive committee for the Thomas Jefferson University Health System, the largest health system in Philadelphia.

The Community Chest: Bolstering the communities of eastern Bergen County