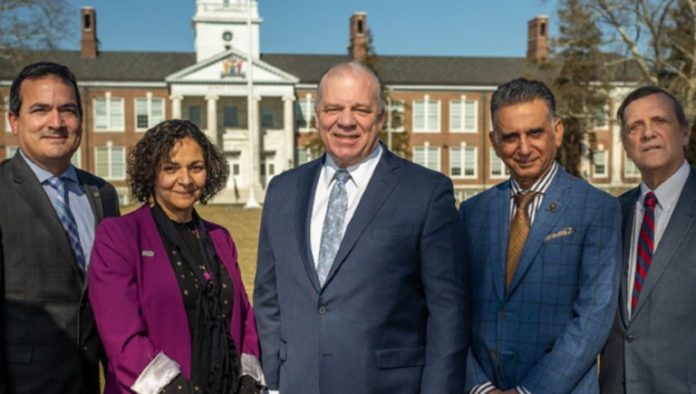 Sweeney, who did so much to help South Jersey and Rowan University during his 12 years as state senate president, will serve as the chairman of the center’s advisory board. Mark Magyar, Sweeney’s longtime policy director, has been appointed as founding director.

Rowan University President Ali Houshmand said the need for such a center is clear — as is its potential for impact.

“The new policy center will tackle the toughest of issues and make its evidence-based research available to the public both for transparency and to enable greater citizen participation in state and local government issues,” Houshmand said.

“We are pleased and honored that Sen. Sweeney accepted our invitation to help guide the public policy center we envisioned. Having worked for decades with both Democratic and Republican administrations, he has built relationships across the aisle to develop policy and enact change to improve New Jersey.”

Houshmand said the center will aim to respond to changes and needs apparent both now and on the horizon. That may be a perfect for Sweeney.

Sweeney, who served in the state Senate for 20 years before his shocking election defeat last fall, already has declared himself a candidate for governor in 2025.

Until the campaign, Sweeney said, he will put his emphasis on the center.

“New Jersey needs an independent, bipartisan public policy center that brings together the best experts and rigorous researchers to develop pragmatic, short- and long-term solutions that improve our state’s competitiveness, grow our economy, develop our workforce, enhance our quality of life and make the state more affordable for everyone who wants to study, work, live and retire here,” he said.

“We are going to do public policy in public.”

The school said the need for more offerings in the field has been apparent for some time. The school began to plan a graduate degree in the field in 2019 and began planning the formation of a policy center focused on New Jersey issues in 2021.

Acknowledging the continued and urgent need to address policy with the benefit of interdisciplinary and evidence-based perspectives, Rowan’s board of trustees approved the degree program, and now has given the go-ahead to create the center.

Nawal Ammar, dean of the College of Humanities & Social Sciences, the academic division in which the center will be housed, said she is pleased to have Sweeney be a major part of the center.

To contact the Steve Sweeney Center for Public Policy, call 856-256-5868 or email Steve Sweeney at sweeneycenter@rowan.edu or Mark Magyar at magyarm@rowan.edu.

Magyar, an award-winning State House reporter who also served as a senior policy adviser to Gov. Christine Todd Whitman, will teach an undergraduate course in state and local government in the fall and the graduate course in public finance next spring. Magyar taught labor studies at Rutgers University for 12 years.

“The Sweeney Center will develop achievable solutions to complex policy issues based on data-driven analysis, benchmarking, rigorous academic research and convening working groups that bring together policy experts, stakeholders and advocates to reach consensus on recommendations,” he said. “I am honored that Sen. Sweeney and Dr. Houshmand entrusted me with this mission.”

Rowan officials said the addition of the Sweeney Center will enhance the school’s public policy research capacity, where its eight colleges and eight schools have focused on practical research at the intersection of engineering, medicine, science, social and behavioral science and business, while ensuring excellence in undergraduate education.

The Rowan Institute for Public Policy & Citizenship, led by Ben Dworkin, will continue with its mission to inform, engage and train Rowan students, faculty and the public in all issues related to politics, policy and active citizenship.