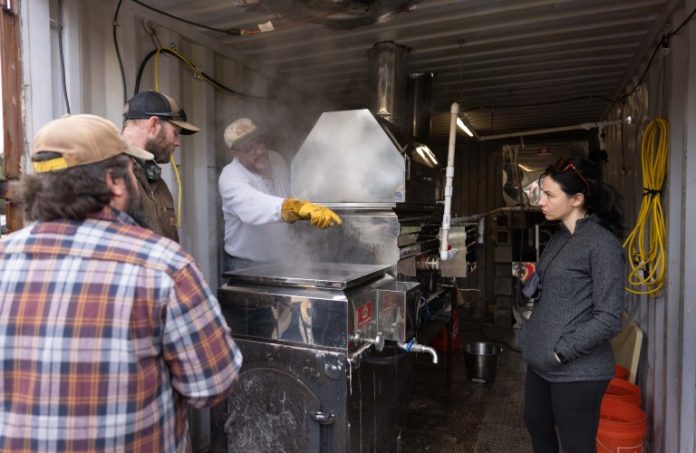 At Stockton University, where there is smoke, likely there is South Jersey maple syrup coming to a boil.

Sap is being made into syrup by the gallons after what began as 90 trees tapped on the Stockton University campus expanded to 400 trees this season. At Stockton’s sugar shack, an evaporator fueled with split wooden logs inside a Vermont cast-iron stove provide the intense heat needed to boil the sap into syrup.

The Stockton Maple Project also took a big step off campus this year, with the addition of seven hubs where private landowners throughout South Jersey and Philadelphia who are participating in the program can boil their sap and sap from other participating community members down into syrup.

The hubs are not just producing syrup, but also participating in research to determine the viability of a maple syrup industry in New Jersey. The project is funded by two $500,000 U.S. Department of Agriculture grants.

“If we do this only one year as part of a grant, that’s not the point,” said professor of mathematics Judith Vogel, a coordinator of the project. “To be a success, we have to find ways to do it post-USDA funding. And that’s what we are doing through partnerships with schools and education. That will bring a whole new awareness and will sustain what is being done.”

Appel Farm Arts & Music Center in Elmer partnered with Stockton because it was a “unique experience” to help expand hubs, said Heather Yelle. “Appel Farm has conducted four boils since mid-January, with each boil providing more expertise. It has been exciting to hone the process, allowing our color and grade to go from a darker brown to a light golden yellow in just about five hours.”

The Maple Project set up a demonstration site at Batsto Village and also will present a walking tour of the project at the Pinelands Short Course on March 12 at Stockton University’s Galloway campus.

With eye toward research, innovation, Scott-Johnson takes over as provost at...

Recruiting with a purpose: Why Verisk decided to bag the swag...