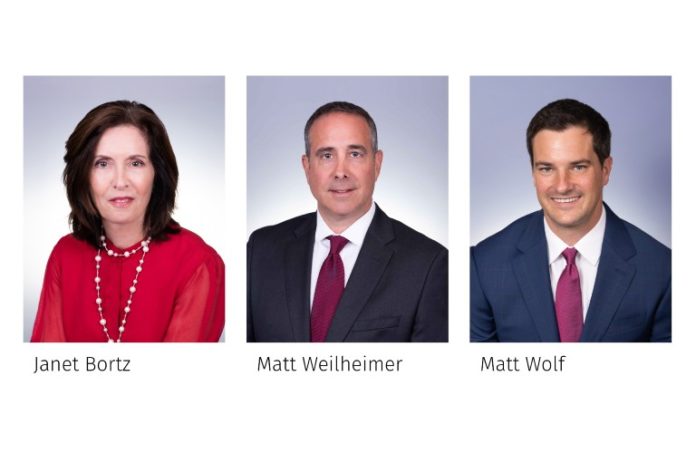 The Kislak Co. on Tuesday announced three executive promotions at the firm’s annual sales awards ceremony, which was held in New Jersey in January and was followed by a weekend celebration in Miami Beach in February for the firm’s top producers and management team.

Janet Bortz was promoted to an executive vice president. Bortz joined Kislak in 2002 and is a leading producer at the firm and in New York’s Hudson Valley, where she specializes in the sale of investment properties including multifamily, retail, office and industrial assets.

Matt Weilheimer also was promoted to an executive vice president. He joined Kislak in 1996 and is consistently among the firm’s leading salespeople. Weilheimer specializes in the sale of apartment buildings, REO assets and other investment properties in New Jersey and its surrounding states.

Weilheimer has won numerous sales awards at Kislak, including the firm’s 2010 and 2015 Producer of the Year awards. His 2021 transactions included more than a dozen multifamily and other investment sales in New Jersey, New York, and Pennsylvania for more than $50 million.

Matt Wolf was promoted to a senior vice president. He joined Kislak in 2017 following over a decade of success in the commercial real estate industry focused on multifamily and other investment sales transactions in central and eastern Pennsylvania. In 2020, he earned the firm’s Producer of the Year award.

Wolf’s 2021 transactions included more than a dozen multifamily and other investment sales in Pennsylvania for more than $100 million, which was an accomplishment for the second consecutive year. Wolf is a licensed real estate broker in Pennsylvania and is also a Certified Commercial Investment Member.

“The past year was record-breaking at Kislak by nearly every measure,” said Robert Holland, president. “These promotions are extremely well-earned and well-deserved, and Janet, Matt and Matt each individually contribute greatly to our collective success. They bring a unique skill set and successful approach to our business and are dominant specialists in their markets. I thank and congratulate them for their efforts and accomplishments.”