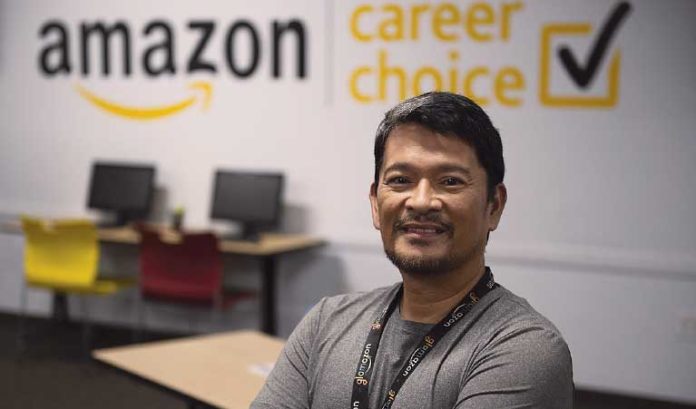 In the past decade, approximately 2,700 Amazon workers in New Jersey have taken advantage of the company’s unique Career Choice program — one in which the company pays for workers who want to advance their education, whether it be finishing up a high school equivalency, a certificate program or going to college.

That number figures to increase exponentially.

Last week, Amazon announced a major expansion of the program — one in which employees will have more schools to choose from and one that will be much easier to access.

The impact could be enormous. With 19 fulfillment centers and nearly two dozen delivery stations, Amazon now employs approximately 58,000 people in the state, making it the largest company employer in New Jersey.

And, while the program certainly would be part of a recruitment and attraction practice to the company, Colin Newman, Amazon’s public policy director for New Jersey, said expanding the program is another way Amazon can have impact in the lives of its workforce.

“Empowering our frontline employees with educational resources and opportunities like this is exactly what we mean when we say we’re striving to be Earth’s Best Employer,” he said.

“Amazon is very proud to be partnering with community colleges across New Jersey, Rowan and Rutgers-Newark to cover the costs of higher education, further training and more. And this is just the start. We are looking forward to partnering with more Garden State schools in the months ahead.”

The following schools are now involved in the program:

They are part of approximately 140 universities nationwide — thus, a Jersey resident could go outside of the state for school and potentially take advantage of the program.

For Amazon, the efforts don’t just end with a check. Amazon officials said there is a system in place that ensures the employees are set up for success, making sure additional support both in school — and in future job placement — is there.

The school’s proximity to an Amazon location also is a factor, but it is not one that would automatically eliminate a school that was interested in participating.

Those who participate in the program are not in any way bound to continue working at Amazon, company officials said.

Aaron Fichtner, president of the New Jersey Council of County Colleges, said the program could have an enormous impact.

“New Jersey’s community colleges are excited to partner with Amazon to assist their employees to gain new skills and to earn credentials and degrees relevant to the state’s economy,” he said.

“New Jersey’s community colleges are deeply rooted in their local communities and will provide Amazon employees with a high-quality foundation that will prepare them for further education and a successful career in a wide variety of fields.”

“We at Rowan University are excited about the unlimited potential that the Amazon Career Choice program offers its employees regarding higher education,” he said. “The partnership between Amazon and Rowan University represents the next evolution in providing affordable educational opportunities and delivering new degree pathways for Amazon employees.

“We look forward to serving the Amazon community with a variety of degree programs designed and delivered in formats to fit the needs of adult learners.”

“Amazon will undoubtedly benefit from a workforce that has a strong educational foundation, and employees will no longer have financial barriers to higher education,” he said. “This is especially meaningful for Burlington County, where many of our residents work at Amazon, and our local community college, RCBC, has been selected as one of their educational partners.”

Amazon officials said they are working to expand the number of institutions in the program moving forward.

Nancy Cantor, chancellor of Rutgers-Newark, said it makes sense for more schools to join. She sees its enormous potential.

“Newark and our region are just brimming with diverse talent, and the key to cultivating that talent is creating opportunity,” she said “That’s what Rutgers-Newark has always been about and that’s why we’re thrilled to be a part of the coalition of colleges and universities across New Jersey partnering with Amazon on their Career Choice program. It’s creating opportunity by making a college education not only accessible, but affordable.”