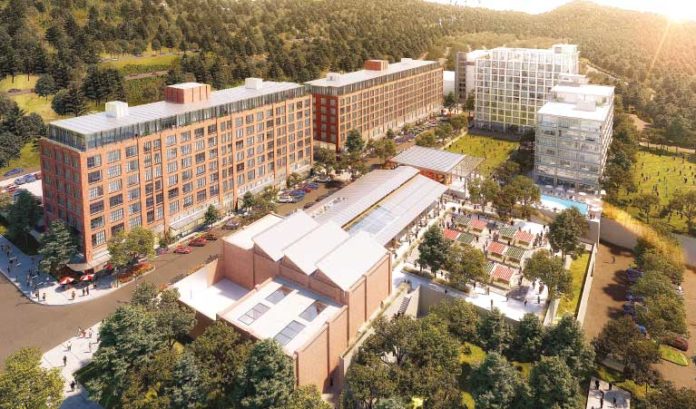 As Shane Connell discusses the $400 million renovation of the Park, which will turn the longtime family-owned 185-acre campus in Berkeley Heights into a transformative work-live-play destination, he says two things distinguish the project:

It’s how and why the Park should not be compared to complexes such as Bell Works or Hudson Yards. And it’s the thought process behind every aspect of a five-year project that aims to be finished in 2024.

Upon completion, the Park will feature five updated buildings with 1.5 million square feet of office space — enough for 5,000-6,000 employees, who will have access to more meeting space than ever before. But that’s just the start.

There will be 150,000 square feet of retail. Numerous restaurants and bars. Plenty of indoor-outdoor space and entertainment options, plus wellness amenities. The already-in-use Embassy Suites hotel has 176 guest rooms, 10 meeting rooms and nearly 10,000 square feet of event space.

And, while the project predates the pandemic, its vision could not fit a post-pandemic world any better.

“The thought was, ‘How do we make a place viable for generations — and not just as an asset, but as a workplace solution?” Connell said. “When we started thinking about that, we were looking for precedents: Why do people go to certain places or want to be in certain places, rather than their home?”

The answer was found in two experiences familiar to most.

“We started by looking at resorts,” Connell said.

A workplace as a resort?

Connell then went back to school looking for more inspiration. Or, rather, he watched closely when his kids went back to their college campuses.

“We looked at college campuses and asked, ‘What are they doing really well to attract the best talent?’” he asked, and answered. “Kids have a lot of options. You’re seeing an arms race with colleges, building better student centers and housing, offering more intramural sports, more indoor-outdoor spaces, the works.

“During COVID, I had college-age kids who couldn’t wait to get back to school, whereas a lot of workers were hesitant to go back. So, we’re creating a work solution that was more aligned to a college campus solution.”

We get it: lots of parties. Actually, Connell said, that’s not far from the truth.

“I think the biggest thing that we’ve seen in colleges are the social solutions,” he said. “COVID showed that anyone can learn online, just like you can work online. But it’s the interaction and integration with people that makes it special.

“So, we want to deliver a workplace solution that also creates social solutions: evening activations, entertainment, better restaurants and bars — or just changing the work dynamic of the lobby experience, which is a social experience as well as a work solution.

“We’re dedicating roughly 9% of the square footage of every building to social spaces and shared spaces. We’re elevating lunch-option cafes so that they are work solutions. We’re offering a really great coffee bar solution that’s open all day. There are conference rooms, breakout rooms, telephone booths and lounge areas, so it feels more like a high-end hotel than an office park.”

Connell says the Park is concentrating heavily on wellness, too.

“Gyms and game rooms, catering services, eating meal plans — even an on-campus medical solution, just like you have on a college campus,” he said.

So far, the efforts are working. In fact, they are exceeding expectations.

While the announcement that Fiserv will be taking 420,000 square feet and eventually bringing at least 2,000 employees to the campus brought a lot of attention, the fact is, Fiserv was just one part of a successful 2021.

How good? Connell said 40% of the office leases were up for renewal — in the middle of a pandemic — and all of the space was either renewed by its current occupants or leased by a new tenant.

Round Table Studios, the Park’s sleek 40,000-square-foot coworking space, which has room for 600, is now 90% filled — and it started leasing during the pandemic, Connell said.

People are choosing to be here, Connell said. Even during the pandemic, when he said the updated buildings had 40% occupancy — at a time most office buildings were vacant.

“That was a proof of concept,” he said.

In the next 24 months, the remaining three office buildings will be updated.

An area called the District, which will feature 328 apartments and 150,000 square feet of additional retail — and a new outdoor park area, called the Grove — figures to be completed in 2024, too.

By then, it will be the future, which is exactly what Connell feels he is building for companies — a true live-work-play environment that will help them attract their future workforce.

And, while he still feels the Park is unique to the area, he will offer one comparison: the Silicon Valley campuses of some of the world’s top tech firms.

“Look at what Google, Amazon, Apple, Facebook are all doing at their headquarters locations — they are trying to amenitize them and make them a better work solution,” he said. “We can do that here.”

Can all of this work in New Jersey? Connell clearly thinks it can. And he says it starts with service.

It’s why Connell created Table and Banter, the hospitality and service company that runs the Park.

“We’re going to treat you as a customer, not a tenant. We’re your partner, and we’re trying to create a workplace solution that makes it easier for you to retain and attract talent.”

Then, there’s location. The Park offers easy access to New York City (it’s 22 miles away, if you want to have a satellite office) but from a campus in a suburban location that provides easy access to home, allowing for a different type of hybrid schedule.

“If you have a child who has an event at school, you can go there and come back if you want, because it may only be 10 or 15 minutes away,” he said. “One of the biggest amenities an employer is looking at is flexibility.”

To have all this at a campus with a resort-like atmosphere is hard to beat. At least, that’s the way Connell sees it.

“Our convenience is not just the access to coming to our campus, but the fact that, once you’re on the campus, you have everything you need,” he said. “We’re creating a neighborhood where you have restaurants, bars, indoor spaces, outdoor spaces, hotels, apartments — all of which come with first-class service. That’s the vision.”

“We’re generational-minded,” he said. “We’re family-owned, and we don’t have partners or investors. When we think about this, we’re really thinking 20, 30, 40 years out. We’re not looking to just activate the campus and build retail and trying to secure the best lease tenants, we’re actually trying to create the best experience for the campus approach.”

JLL completes lease for engineering firm at Class A building in...