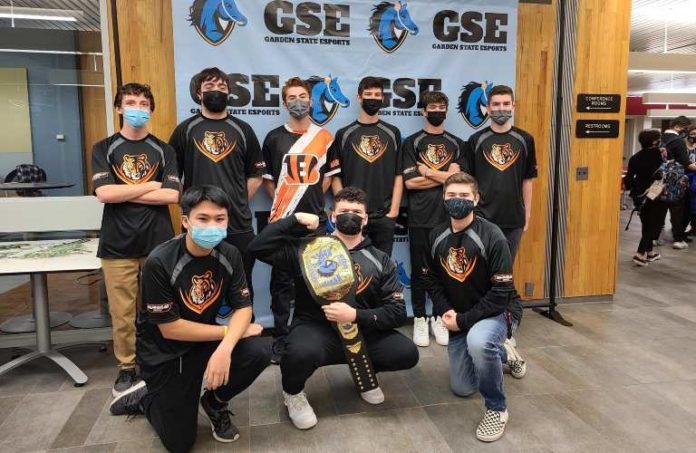 Barnegat High School recently honored athletes with varsity letters, which for some students there serve as a memento of a glorious, undefeated run from a once-underfunded program that went from training on ramshackle equipment to being crowned state champions … along with all the other familiar characteristics of an underdog sports narrative.

Except Barnegat coach Traci Sellers’ undefeated team won’t be receiving the accolade for traditional sports. She’s head of a contingent of esports high school athletes that — for the first time in New Jersey — will be recognized with varsity letters for their success in the competitive arena.

Barnegat is one of more than 150 New Jersey schools today with esports programs, full of an enthusiastic new brand of athlete that’s earning varsity letters, participating in high school pep rallies and even brandishing video game accomplishments on college resumes.

Chris Aviles, a STEM teacher and esports coach in the Monmouth Beach School District, heads Garden State Esports, an organization pushing to get leagues established across the whole of the state. One of the many goals is to introduce students to the many branching career paths related to the esports and video game business, which has only grown during the pandemic.

Right now, Garden State Esports has convinced 163 school districts to establish esports teams under its banner — about a third of the state. That represents about 5,000 New Jersey students participating in the organization’s statewide league.

“At this rate, we should have every New Jersey school involved within three years,” Aviles said. “And that’s really the goal, to get every school district involved. Every student should have the opportunity to be part of an esports team.”

The organization, which mirrors the efforts of groups in about 40 other states with similar goals, has doubled its league in size every six months since its inception.

“This was something we started at the start of the pandemic,” Aviles said. “It was a way for students to stay connected and have something to look forward to when everything else in their lives was canceled.”

One of the early adopters was Barnegat, where Sellers, a computer science and physics teacher, started playing team-based video games such as the popular League of Legends two years ago.

In its first season, a group of seven students on the high school campus was dusting off some of the oldest computers you could possibly boot up a video game on. The games stuttered and ran slowly on the old devices, a problem solved when distance learning meant they all had to play together from home most of the time anyways.

A state championship title later, the high school has about 50 kids participating on several different video game competitive teams — from the racing-soccer hybrid Rocket League to team-based shooter Overwatch. The school last January was the first in the state to have varsity letters approved by the school district for esports athletes.

All kinds of kids

There are three broad buckets kids in school esports programs might fall into: Students for whom team sports are nothing new; students who would never consider school athletic program tryouts; and students who, frankly, would seldom think to try at most anything school-related.

What do each get out of it?

Chris Aviles, an esports coach and self-proclaimed “data nerd,” will first say that, for the student involved in other school sports — they aren’t giving anything up.

“Overwhelmingly, what we’re seeing in the data is that kids are not abandoning traditional sports to play esports,” he said. “For instance, if I’m a basketball player and our winter season is (the video game) Overwatch, I’m not quitting basketball to play on that esports team. We’re attracting students who are going to find ways to play this in their free time anyways.”

For those who don’t have an interest in traditional sports (which Aviles hinted might be up to 75% of those involved), this might be the only team activity they’ve ever participated in. What they get out of it is all the same life skills they would get out of other team-based extracurricular activities.

“(Additionally,) around 12% of the league is a student with special needs or a disability,” Aviles added, “so, some might not be able to participate in traditional sports, but can find homes on these esports teams.”

Traci Sellers, another teacher and esports coach, said the transformative potential of these competitive leagues might be most apparent in the third category of student: The one that not only wouldn’t take part in sports, but scarcely takes an interest in academics either.

“We’ve actually had a lot of that, and having this team-based activity that they’re comfortable with and feel they have skill at — they’re excited to come to school now because of this program, because it allows them to be on this team,” she said. “It’s really great.”

“Our district saw how much of an impact it was having on kids in our school, and this past summer they gave us the equipment that was needed in order to actually participate at school,” Sellers said. “Now, we have probably one of the best esports rooms at the high school level in the state.”

Sellers said these video games take a level of dedication, communication and teamwork comparable to any sport in order to build a strong program. Along with that comes the pride and bonds built in team-based activities that see alumni now in college returning to the school to help coach current Barnegat students. Sellers also alluded to students taking more of an interest in school life as a result of these new programs.

Aviles, the president of Garden State Esports, believes school districts across the state are coming to recognize the value of that.

“Kids who do something after school have better attendance, better grades, better behavior in school and they’re more likely to graduate,” he said. “Now, we have kids who are looking forward to going to school because they’re part of that esports team — where they have a teacher as a role model, their teammates — something that they were going home to do by themselves anyways.”

The bonus for Aviles is that students, in doing something they already enjoy, are introduced to career pathways in the process.

In just one example of that in action, Aviles thinks of a seventh-grade student who sent him highlight reels of local esports competitions. Several years later, they’re now an intern for him and has continued to develop their video editing skills.

“Part of our mission, besides the competition, is getting kids to make the connection about how they can follow their passion for gaming into different careers,” he said. “Ideally, these kids play with this organization, go on to a collegiate group … and maybe get a job within the growing esports ecosystem here and stay in New Jersey.”

That’s something parents understand, even if what’s actually happening on the screen when their child is competing … that might not register as easily.

“Truthfully, very few parents love video games or know anything about esports,” Aviles said. “What I do have are parents who say, ‘All my kid does it play video games, so I might as well lean into it and see if they can become a pro or get a job in this industry.’”

Among the stories of these newly minted athletes prevailing in major competitions in New Jersey’s growing scholastic esports scene are simple heart-warmers.

Aviles spoke of a young esports competitor with autism whose grandparents flew into New Jersey from Georgia just to watch him suit up in a team jersey for a match that would last only an hour. Being truly in the spotlight — that was a first.

“The friends and family of those celebrating these athletes may not remember games, or even who’s winning — but they remember how we’re making kids feel, and how they’re getting the opportunity to be recognized and feel like they’re part of something,” he said.