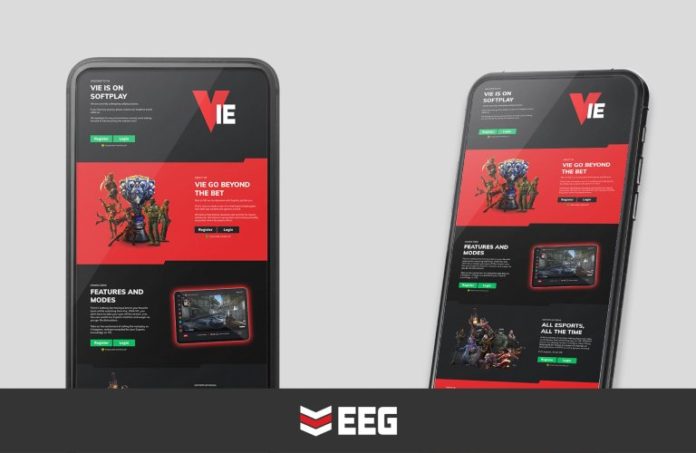 In 2014, Grant Johnson’s Canadian business partners were trying to convince him of what he might now try to convince you of: Esports are the future, they said. And they felt the best way to demonstrate that was to have him watch championships held in Toronto for the real-time strategy game Starcraft.

But, his imagination wasn’t exactly running wild with thoughts of what he was in for. He was pretty sure: Teenagers would be doing teenager things (in this case, playing video games), in front of teenager friends.

What he was actually in for was what Johnson now refers to as his “aha” moment. He would walk into an arena packed with the most energetic, highly engaged 5,000-some young adults, all roaring.

He would feel like he was at a rock concert.

“There was loud music, a laser show, smoke, fans going wild,” he said, “and people watching a video game being played.”

His experience there would lead to him launching an online gambling company focused on esports, Esports Entertainment Group, and, many years later, heading New Jersey’s first esports betting platform. The company, as of January, received the only New Jersey Division of Gaming Enforcement transactional waiver awarded to an esports betting operator.

The waiver allows the company to legally accept bets in the Garden State. One of the ways it announced it intended to do that was through an online spectator wagering system called VIE.gg.

Johnson expressed even more excitement about the company’s player-versus-player wagering platform, LANDuel, which debuted at the country’s first sanctioned esports event of its kind at the Hard Rock Hotel & Casino Atlantic City. The casino hosted the 256-player, in-person Madden NFL football tournament alongside that new system in mid-March, after the COVID-19 surge pushed the event back two months.

“What the platform allows for is skill betting, like poker for (video) gaming,” he said. “Players can bet something like $5, $10 on their own matches as they play, and the winner takes the purse, while the house takes a commission or fee.”

The upside for Atlantic City is maybe one you’ve heard before: Casinos need to bring in a 35-and-under demographic. Because they aren’t showing up to play slot machines.

“That’s why casinos have been exploring this esports angle in gaming for years now,” Johnson said. “You had casinos that were probably ahead of their time that created centers for it to host events, such as the Luxor in Las Vegas, but many casinos didn’t see how it was a fit, because there was no betting element. Now, that’s being added to the gambling regulatory framework.”

It’s for that reason that casino operators as far as the West Coast, the Caribbean and Europe will be flying into the Hard Rock in March to see how its inaugural event goes.

Johnson expects to impress. Although, it must be said, if he didn’t, he wouldn’t be doing it. Because there’s a lot of eyes on this first-of-its-kind event, and his expectation is that it’s a “pilot study” that might end up an entry point for the company into a huge casino vertical, if successful.

“We have had gaming influencers based in the state — and I can’t say specifically what individuals or groups — reach out to us in a way that shows there’s a pent-up interest in this,” he said. “That already gives me a lot of confidence and comfort that we have a product that’s appealing.”

Johnson, however, can’t say that being one of the first in this market has been a direct path of one massive success after another. Most of what he learned since the early days has been the result of trial and (mostly) error.

“If it was easy, everyone would be doing it,” he said. “For a long time, this was largely viewed as the pursuit of 14-year-olds in their parents’ basements. That wasn’t the case then, and certainly isn’t now.”

Johnson came to this endeavor after a long stint with one of the first companies to introduce the online gambling model in the ’90s. Most of those operations were shut down due to regulations in the U.S., which is why Johnson years later found himself paired up with business partners in Canada — leading him to the subsequent 2015 launch of Esports Entertainment Group.

The company, which became the first online gambling entity to be publicly traded as of April 2020, has secured partnerships with traditional sports leagues, including the NFL, and major sports organization such as Harris Blitzer Sports & Entertainment. It also established LAN cafes for an in-person esports experience, with its 11,000-square-foot Helix eSports North Bergen business.

With a strong core of economic development groups and universities in the state taking an interest in esports, senior staff members already in the region and a new office in Hoboken, the Garden State seemed like a better first step for the company than Las Vegas, despite Nevada’s gambling cachet.

“We see a fertile market for us here,” he said. “The way that we’re geographically uniquely positioned across the river from Manhattan and along Philadelphia, we expect to be able to draw interested individuals from those two regions, also.”

New Jersey being at the forefront of esports regulations — and infrastructure-wise, in Johnson’s view — lends credence to the talk of New Jersey as an “epicenter” for this new industry.

For all of that, he often articulates a counterpoint that might come as no surprise: These are still the early days.

“For all the conversation about how fast esports is growing, and gaming’s growth as a global phenomenon, when it comes to betting among esports fans, it’s going to take a little bit of time for the market to mature,” he said.

As soon as disclaimers are out of the way, Johnson piles on the optimism: The ceiling is high for esports over the next two decades … perhaps as high as any other section of the professional sports industry.

“We think that’s the direction we’re heading,” he said. “And, certainly, we’re the vanguard. So, sometimes you take shots when you’re upfront. But this is where I want to be.”

NuMSP expands into California with acquisition of Aperio IT