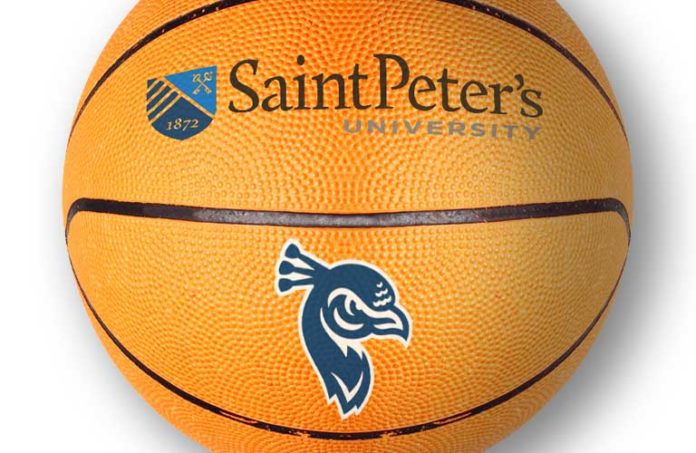 By the time Doug Edert’s last-second, game-tying shot was sitting on the rim — seemingly deciding if it would fall in and extend the Cinderella story of the men’s basketball team at Saint Peter’s University, or fall out and lead to a crushing defeat — the heads of Erbach Communications already had the answer to their big question:

Yes, they were stopping the presses on the upcoming issue of the Saint Peter’s alumni magazine.

Kristen Volkland, the owner and president of Erbach, said they had been hedging for a while, starting when the school surprisingly won the Metro Atlantic Athletic Conference to receive a bid to the NCAA Tournament.

Sure, it was a nice moment for the school. But it was one most expected to be a one-and-done experience and double-digit defeat — likely nothing to write home about, so to speak.

When the team started battling Thursday night to become just the 10th No. 15 seed in NCAA history to win a first-round game, giving No. 2 seed and perennial power Kentucky more than it expected or could handle, Volkland knew they had to put the edition on hold.

“How could we not?” she asked, and then answered. “Throughout the whole game, we were like, ‘Oh my God, are you kidding me?’ We kept saying: ‘This is incredible. They could win this.’”

Saint Peter’s did. In overtime. Becoming the latest small school to get thrust into the national spotlight in a way that only March Madness can. Volkland saw the future in real time.

“We knew we had to stop everything,” she said. “We knew this had to be the cover story. And the amazing thing is, we still don’t know when we can even write it, because the story is not over yet.”

Normally, such last-minute changes would cause more than a few snickers in the publication world. Not at Erbach — a company where seemingly half the staff are graduates of the Jersey City school.

Rose Duger, the senior writer and director of publications, went there. As did Mary Massaro, the art director. The founder of the company, Bart Erbach, is an alum. And the current intern, Danielle Pelliccio, is set to graduate from there this spring. 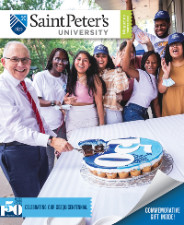 The Saint Peter’s University alumni magazine is produced twice a year by Erbach Communications Group, which specializes in publications for schools at all levels of education.

“You should have seen the group text that was going around,” Volkland said. “Everyone was watching the game; everyone was so excited.”

Now, it’s a matter of capturing the Cinderella story … whenever it does end.

That’s the big game now for Volkland, who has worked at the company for more than 25 years and became owner in 2014.

Erbach, which serves as the publishing arm for schools that do not have a full-time staff, has been working with Saint Peter’s for more than 20 years, producing two alumni magazines a year as well an annual report.

Each issues involves months of planning and plenty of back-and-forth with the school. And, while last-minute adjustments always are part of the process, they are usually nothing like this.

“As a small, woman-owned business, you have to be flexible and change when the event presents itself,” she said. “And, after working with them all these years, we know Saint Peter’s is a special place. We’re happy that the rest of the country now knows that, too.”

The only unknown: Exactly when will the alumni subscribers get the spring edition of the magazine?

“It could end this weekend, it could go in next week, we just don’t know,” Volkland said.

They only know it will be a heck of a cover story — one worth waiting for.

How we pick the list: Simple question has complicated response