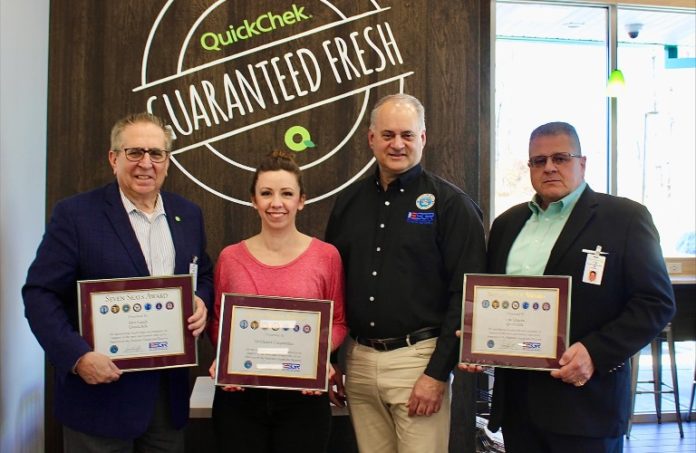 QuickChek Corp. received a top honor in recognition of its ongoing support of the military community and its family members, according to a Monday announcement.

QuickChek Vice President of Marketing and Operations Don Leech, Corporate Security Manager Lou Linares and Community Involvement Coordinator Heather Stillman accepted the Seven Seals Award from the Employer Support of the Guard and Reserve, a Department of Defense program that recognizes employers who support and value the employment and military service of the men and women who serve America in the National Guard and Reserve.

The Whitehouse Station-based fresh convenience market chain said it raised more than $1.58 million to support local veterans and their families since 2009.

In 2021, the company raised $101,000 to support veterans groups, including $54,000 through its annual golf outing at Beaver Brook Country Club in Annandale to assist military veterans and their families in their transition into new careers.

The Seven Seals Award was presented on March 18 at the company’s newest store in Readington Township by Bridging the Gap for Veterans, a 501(c)(3) nonprofit organization based in Manasquan.

“We are very pleased to continue our support of our service members and their families who give so much of themselves,” Leech said. “We are also very proud of the ongoing support we receive from our customers, who share our desire to aid members of our local communities throughout the year in their time of need.”

“We’re proud to recognize QuickChek with one of the Defense Department’s highest awards,” said Bridging the Gap for Veterans founder and ESGR New Jersey State Chairman Mike Ferraro. “Our citizen warriors who serve in the Guard and in the Reserve could not defend and protect us at home and abroad without the continued promise of meaningful civilian employment for themselves and their families.”

A wholly-owned subsidiary of Murphy USA, QuickChek has been named one of the best places to work in both New Jersey and New York in part due to its commitment to taking care of its employee team members as well as for giving back to its local communities.

Retailers in LMC survey: We’re going to be OK this holiday...