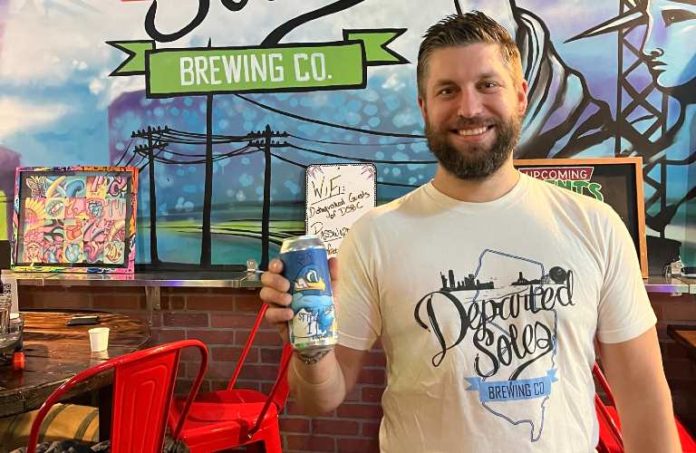 Having Departed Soles Brewing Co. being selected by an online sports publication as the Jersey City bar that represented Saint Peter’s in its March Madness drinking guide was a thrill.

That’s why owner and founder Brian Kulbacki and his staff created a new beer (Light Rail Lager) and wore blue while watching Saint Peter’s opening-round game against Kentucky last Thursday, despite the fact that it was St. Patrick’s Day.

When No. 15 seed Saint Peter’s pulled off the upset of upsets over Kentucky, Kulbacki knew Departed Soles had to do more. But what?

Creating a beer in honor of the Peacocks wasn’t a possibility.

“You can’t just push a button and get that done in 48 hours,” he said.

And, somehow, you can only open one minute late on game day.

“We were relabeling the cans all morning,” Kulbacki said. “I labeled the last can at 12:01. Our doors were supposed to open at 12, so we were one minute late.”

Not that anyone minded.

Kulbacki quickly did the math and realized he wouldn’t have enough cans for all those in line, so he limited everyone to just a four-pack — and put a few away for Saint Peter’s.

He didn’t need to do the math on the cost.

A rush project like this was not going to be a money-maker. Quite the opposite, in fact. But that didn’t matter to Kulbacki. He wanted to do something for the community — which has been his aim since opening the brewery in 2015. In fact, he felt he owed it to the community.

“I’ve always believed that craft beer is about the community because, without your community, you’re nothing,” he said. “I think hand in hand with that is this: Over the last two years, we’ve asked for local support — to shop local, buy local, drink local — to help people get through the pandemic.

“I don’t want to be a hypocrite and just take that local support. I think we have to give it back as small business owners. That’s what I wanted to do with this beer — support the local university, the local team, and getting everybody on board with supporting St. Peter’s through this madness.”

Those who know the 35-year-old Kulbacki are not surprised.

For starters, he was raised by parents who met on the volunteer rescue squad in East Brunswick.

Then, there’s the story behind the story of the name of the bar. It’s in honor of his best friend, Chris Ward, a teacher in Bridgewater who also pushed Kulbacki to go in with him and open a brewery.

After Ward died in a car accident — and after Kulbacki worked through the depression issues that come with such a tragedy — he decided to open a brewery in Ward’s honor. Kulbacki even created a gluten-free beer in honor of his friend, who suffered from celiac disease in his final years.

“The whole point of Departed Soles was to create a quality gluten-free beer so that everybody could enjoy the brewery experience,” he said. “We’re not about only making IPAs and trying to be that place that has a line out the door that always sells out.”

His gluten-free beers — about 50% of his offerings — have won some big awards at the Great American Beer Festival and other contests. Kulbacki is honored, but that’s not what pushes him.

“We want to have a place where there’s something for everybody and you can just have fun,” he said. “I’ve always said we want to be a brewery version of a dive bar.”

Saint Peter’s, of course, won its second-round game Saturday, becoming just the third No. 15 seed to reach the Sweet 16.

The next party is set for Friday night. That’s when Saint Peter’s will play Purdue at 7 in Philadelphia.

That gives Kulbacki five days to get more labels (already ordered) to put on the few remaining cans of Light Rail Lager and get his brewery — located just a mile or two from campus — ready to go.

“We will have the TVs on and the sound blasting,” he said. “It will be fun.”

But will there be enough Busted Bracket beer?

“We have plenty on tap, but I know we’re going to run out of cans,” he said.

For those who can’t get to his brewery, but still want to support the team, Kulbacki has put the newly created logo on a T-shirt and will be taking preorders this week. Not surprisingly, he already has said that $5 of every shirt sold will go to help those affected by the war in Ukraine.

“We’re not trying to profit off it,” he said. “We’re just trying to keep the momentum going for Saint Peter’s while supporting another community that really needs help.”

Kulbacki said he’s just doing his part to keep up the enthusiasm around the team.

“There’s Jersey pride — and then, there’s Jersey City pride,” he said. “It’s just been crazy over the weekend. This team is taking it to a whole different level.”

At just the right time.

“Everyone’s still figuring out what the world’s like coming out of the pandemic and getting used to it and the new normal and whatnot,” he said. “Spring is now sprung. And I think people are eager to get out and about.

“This is just the perfect storm of a feel-good story — and a feel-good Cinderella story for the community that everyone wants to be a part of.”