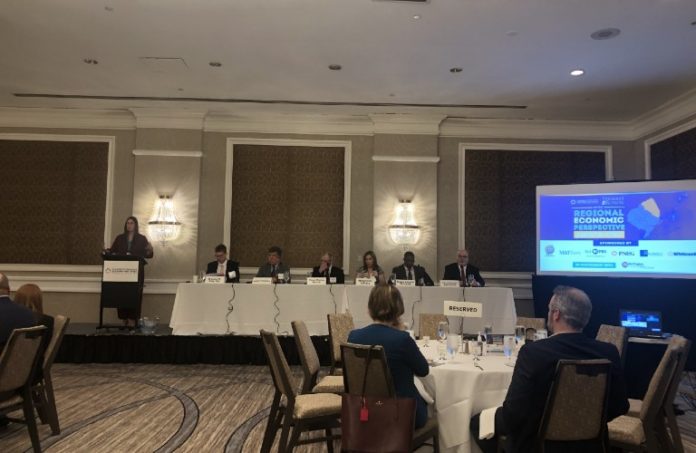 There’s positive economic activity going on in Burlington County. That’s according to the mayors of several townships and other county officials who gathered at the Chamber of Commerce of Southern New Jersey‘s Regional Economic Perspective Burlington County on Friday morning at the Westin in Mount Laurel.

Daniel O’Connell, commissioner director of Burlington County, offered the keynote, in which he highlighted the many ways Burlington County government has assisted its residents, from the loans to various new businesses, to the county being home to Joint Base McGuire-Dix-Lakehurst, the No. 2 employer in the state and the No.1 employer in South Jersey.

“The redevelopment and growth of the Route 130 corridor is one of the county’s biggest economic success stories. It is a prime example of the work the economic development and regional planning department does to attract business to the county,” O’Connell said.

He touted that, in the last year, building permits were issued for nearly 7 million square feet of new construction; that there are four new supermarkets coming to the area; more new shopping centers and new commerce centers; and that there are new residential developments in nine towns.

A Lidl grocery store, the Feed Mill, Tractor Supply and a new Wawa, as well as Deborah Heart and Lung Center’s hospital expansion — all are examples of the economic development that has gone on within the county, he said.

Still plaguing the economic progress is the national employment problem, which is felt heavily on the local level. O’Connell said Burlington County businesses have been under stresses to find and retain employees. Filling in-demand jobs is something the county is working on to help individuals and businesses alike. The Burlington County Workforce Development Board launched its Engage by Cell program, in which residents can sign up for and receive text messages about job openings and other opportunities such as job fairs and training programs. They also can receive training tips. The county has also partnered with the SkillUp New Jersey training program.

The bottom line, O’Connell said, is that Burlington Country is a place businesses and people want to be because of its affordability.

Mayors and officials from Lumberton, Mount Laurel and Marlton agreed, and each spoke of their individual township’s economic accomplishments. The towns are offering many initiatives to bring new businesses to their communities.

Charles Watson, mayor of Medford Township, said there is a lot of new business activity going on. From farm stands to Main Street — the town offers residents a unique blend of restaurants, stores and businesses. And, since businesses have reopened after the pandemic shutdowns, many new ones have also opened, thanks to many of the town’s efforts and county programs that were initiated to revitalize the town. Watson said events like the town’s food truck night also have proven to be a boon for the local economy and, in total, there will be four new breweries open by 2023.

Gina LaPlaca, mayor of Lumberton Township, said her town is on the map for all the right reasons. It has a strong identity and an eye toward innovation. Lumberton is also looking forward to having multiple stores open for recreational cannabis once the state allows the operations. Much has been accomplished in Lumberton, according to LaPlaca, without raising taxes.

In Mount Laurel, Mayor Kareem Pritchett also highlighted the fact that, even during COVID, the town was able to keep the promise of zero tax increases and accomplish having new businesses open, such as a Dunkin Donuts and a soon-to-be new Wawa, and is open to all six classes of marijuana. Pritchett, who was sworn in as the township’s mayor this past January, said he is looking forward to helping the local economy through smart policies.

Finally, Paul Conda, committeeman, administration and senior services, Cinnaminson Township, stated that his town, of which he’s been a resident for 40 years, is going after businesses to have then set up shop within. “When we see something that’s a fit, this town chases it down,” he said.

Wingstop, Tim Hortons, Popeye’s, Burger King and a Jiffy Lube are just some of the recent businesses that have opened in Cinnaminson.

Conda also said that any economic development is good, and that breweries are another big draw of revenue for its area. Like other townships, breweries are on the top of the list to attract.

From car washes to cannabis and retail to farmstands, Burlington County is welcoming small businesses, as they are the backbone of the county’s economy. And Burlington is ready to assist these businesses in any way it can, and work in lockstep to get things done.

Business leaders, think tanks on borrowing deal: Everything from ‘No concern’...

Agreement will strengthen partnership between innovation groups in Newark, Berlin