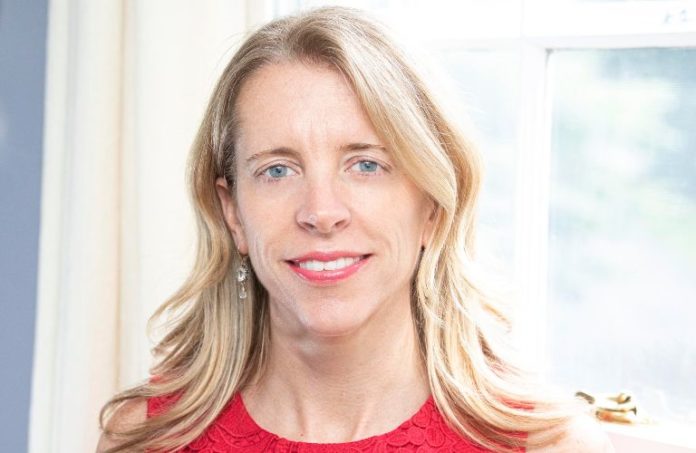 Taking calls from a farm in Argentina, Valeria Aloe sometimes has to pause for the loud roll of tractors and the cries of South American birds.

It wouldn’t be the first time her voice had been drowned out.

She’s determined to be heard now, after reflecting on years of her career in which she was afraid of speaking up. She’s now conveying to other Latinas in the business world that it’s time to overcome what she calls “culturally limiting” beliefs that have, for too long, kept them quiet.

A small town in Argentina — and the label of “third-world country” she was told belonged to her homeland — is where it began for Aloe, an author who left a local mark on entrepreneurs at the Statewide Hispanic Chamber of Commerce of New Jersey.

“When you come to a first-world economy from the ‘third world,’ you really wonder what you could possibly contribute,” she said. “And, particularly as Latinas, who are often the first generation in families to step into college and professional spaces with opportunities not available to our parents, we’re carrying that mindset as we try to chase certain expectations.”

That’s part of what the first-time author explores in her recent “Uncolonized Latinas: Transforming Our Mindsets and Rising Together,” which has risen to the top ranks among Amazon’s new book releases.

A lot of what she identifies as the mindset people carry from Latin America to the U.S. — and what’s later passed onto future generations — came from observations of entrepreneurs during her time running the local Hispanic chamber’s training programs.

“What happened is that, in 2016, when I left a corporate career and stepped into that role at the chamber, it was the first time I was fully immersed in the Hispanic community in the U.S., after spending many years being the only Latina in the room,” she said. “I finally had this immersion, and learned a lot from it.”

Aloe, who had worked at firms such as PricewaterhouseCoopers and Procter & Gamble, noticed a pattern in the Hispanic entrepreneurs she interacted with: They would grow their business. And then, they’d get stuck.

The struggles they confided in her were the same ones she faced as an immigrant herself; they were also the same ones she believes accounts in part for what she termed the “Hispanic paradox,” or the massive disparity between a 60 million population size in the U.S. and the less than 5% of leadership positions the community occupies.

One of the main features was that the professionals felt a deep sense of “unworthiness,” Aloe said. She roots that in the colonial history of resource-stripped, and thus underdeveloped, countries.

“(Hispanic immigrants) come from a lot of poverty and struggle,” she said. “Right now, where I am in Argentina, 40% of kids under 15 years old live under poverty. And, when you come from poverty, and start doing well, I can tell you from my own experience, when you suddenly have access to money, you feel very uncomfortable with the money coming in.”

The result of that, in her view, is entrepreneurs overcompensating, experiencing burnout, competing fiercely with others in their same community as a way of validating their own success. Hispanic entrepreneurs also tend to undercharge for services — sometimes up to 60% less — compared with peers, she found.

Paired with that, she adds, are other “culturally limiting” behaviors.

“Our culture often teaches us to put our heads down and not ask for what we need,” she said. “I spent a long time in the corporate world just being thankful to get opportunities, not asking for promotions or salary increases. And I can tell you — I spent seven years as a top talent, not asking for it — when you don’t ask, you don’t get.”

Part of Aloe’s project is to find potential solutions for professionals dealing with these struggles, which she calls a process of “unlearning.” Self-advocating, taking more assertive action and building a personal brand all serve that purpose.

“It’s about talking about our victories, tooting your own horn,” she said. “As Latinos, we don’t do that. We come from a cultural silence. We were told, growing up, to just be quiet.”

The hope for Aloe is that her book also can bring more awareness for non-Latino “allies,” especially corporate managers and those targeting this demographic market, to understand why Latino professionals can get stuck in the way they do.

Additionally, she’s hoping to have an impact on the country’s growing young Latino workforce.

“Empowering our youngest is critical,” she said. “Sometimes, it’s harder to change mindsets later, as we can become more fixed in those mindsets as we grow. So, there’s a huge potential in helping younger generations with this understanding.”

Talking the talk: NJ Orators has been helping kids find their...

Harmon lands spot on U.S. Chamber of Commerce board