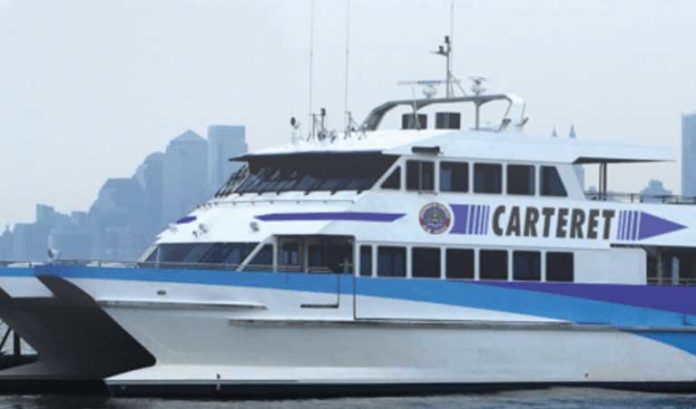 Carteret Mayor Daniel Reiman called getting the final permit earlier this week from the U.S. Army Corps of Engineers to construct the Carteret Ferry Terminal along the Arthur Kill the first step to a new Carteret.

The Carteret Ferry Terminal, after all, is just part of Reiman’s vision to turn Carteret’s waterfront into a popular regional destination, which now includes a waterfront fishing pier, public park, 185-slip marina, future events center at the park and 2-mile riverwalk funded through grants from the state.

Accomplishing all this, Reiman said, is transformational.

“Our nearly 2 miles of public access along our eastern shoreline, including our ferry, marina, events center and walkway, is a remarkable feat for a community that had no public access to the waterfront for over 100 years,” he said.

“While all permits are now in place and necessary funding has been secured for two ferry boats — the waterside and landside improvements — we will continue to seek out additional funding for the intermodal terminal building itself, which would be the next phase of this project,” he said.

No matter what happens, Reiman said approval of the Carteret Ferry Terminal is a game-changer for the borough.

“This is a great day for Carteret and the residents of our region,” he said. “After years of inching forward and fighting bureaucratic agencies at every level, we can finally begin construction on the long-awaited Carteret Ferry Terminal.

“Soon, commuters and others traveling to Manhattan will have a fast and direct route from Carteret, avoiding the high costs of gasoline and the frustrations of driving into the city through the tunnels or bridges.”

Additional benefits of the Carteret Ferry Terminal include:

Carteret officials said the permit grants approval for one-time construction dredging along the Arthur Kill River for approximately 19,500 cubic yards to a maximum depth of 17 feet. The permit also allows the borough to install approximately 130 feet of bulkhead, a 40-by-40-foot pier with two gangways for passengers to access the ferry, steel pilings, bumpers and a 200-foot-long wave screen.

Middlesex County board of county commissioners Director Ron Rios, a resident of Carteret, said he is thrilled by all that is going on.

“The board of county commissioners is pleased to be working with Carteret to realize its vision of building a state-of-the-art ferry terminal,” he said. “Adding this terminal will make Middlesex County one of the most connected regions in New Jersey, accessible by train, bus, highways and, in the near future, by water.

“As a Carteret resident, I’m especially excited to see the positive impact, both economically and environmentally, this new mass transportation option will make on our community at large.”

“Diversifying and expanding our transportation network with this ferry service is crucial to transforming life for Carteret residents and those in surrounding communities, whose contributions are important in sustaining our nation’s most economically productive region here in the Northeast,” he said.

“With partnership spanning the federal, state, county and city levels, it is a great to see this project get past its final hurdle. Soon, residents, local businesses and the regional economy will be reaping the benefits of this investment, thanks to Mayor Reiman’s vision.”

The Reiman administration has earned over $30 million in grants from the federal and state government toward this project.

“I want to congratulate Mayor Dan Reiman, members of the borough council and all those involved to make the Carteret ferry a reality,” he said. “As Carteret’s representative in Congress, I have worked closely with the borough to secure the necessary permits and provide federal and state funding. I am excited for the residents of Carteret to see this project get off the ground and provide fast, easy and a more environmentally friendly transportation to Manhattan for work and pleasure.”

Reiman said the impact will be felt for a generation.

“Carteret is quickly becoming one of the most desired locations for commuters to call home,” he said. “New residential and commercial opportunities, combined with our future ferry service, newly constructed Performing Arts and Events Center, upgraded parks and stable tax rates solidify Carteret as a great place to live, work and raise a family.”