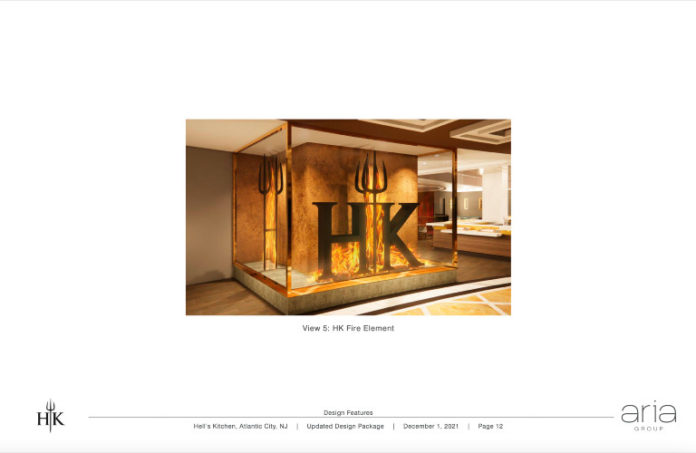 Gordon Ramsay Hell’s Kitchen is set to open in Caesars Atlantic City this summer, according to a Tuesday announcement from Caesars Entertainment.

“I’m very excited to announce that I’ll be opening my third restaurant in Atlantic City — Gordon Ramsay Hell’s Kitchen. Atlantic City and visitors throughout the tri-state have been so supportive of Gordon Ramsay Steak and Gordon Ramsay Pub & Grill, so I look forward to having them experience another one of my signature concepts,” Ramsay said in a prepared statement.

Designed to be an experiential and immersive destination restaurant, guests at the restaurant inspired by the globally popular FOX television series will feel transported to the studio set. The inspiration from the hit show is evident throughout all three levels of the restaurant, from the signature fiery pitchfork that marks the entryway, to the chef uniforms and menu items.

Additionally, the winner of Season 21 of “Hell’s Kitchen” will be named head chef and have their portrait hung with the other previous champions on the winner’s wall. The restaurant will boast design features that are engaging to all senses and are a nod to both the red and blue teams featured on the show.

The kitchen is the centerpiece of this unique eatery, with mosaic tiles artfully framing the open space, allowing guests a view from every seat in the house. To further bring the electric atmosphere of the studio into the dining room, additional key elements of the show are infused in the design, such as fire, heat and custom-designed lighting that combines brass rods with pitchfork features that run across the high ceilings.

The menu will include Ramsay’s signature classics like Beef Wellington, the Hell’s Kitchen Burger and Sticky Toffee Pudding.