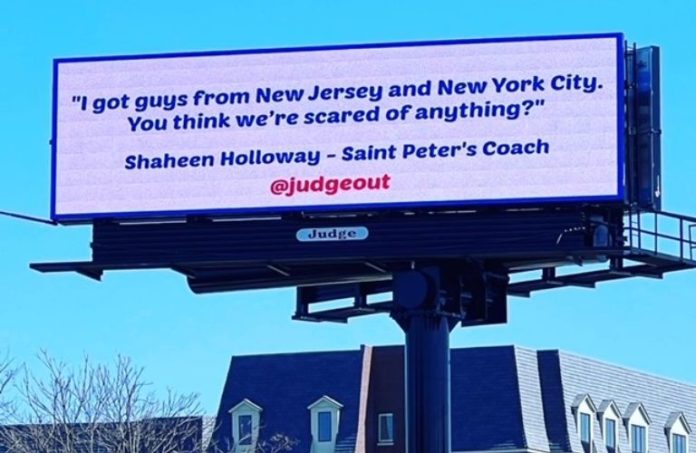 Marty Judge reads all the area newspapers every day. And, while he likes to get updates on the area sports teams, he’s really looking to find new clients. Judge, the owner of Judge Outdoor, is in the billboard business.

Last weekend, while reading a Sunday morning column by Steve Politi in The Star-Ledger on Saint Peter’s Cinderella run to the Sweet 16 of the men’s NCAA Tournament, an opportunity presented itself — courtesy of Politi.

After writing one of the many money quotes from Saint Peter’s coach Shaheen Holloway — “I got guys from New Jersey and New York City. You think we’re scared of anything?” — Politi wrote, “Someone should slap that quote on a Turnpike billboard.”

Judge instantly knew he was that someone.

“I was like, ‘Oh, my God, this is handmade for me,’” he said. “I’m a small businessman, they’re a small school. Sometimes people don’t take me seriously, no one was taking them seriously. I said to myself, ‘I’ve got to do this.’”

Judge, who just opened a digital billboard on Route 4 in Bergen County last fall, had three open 8-second spots available. So, he created the all-text billboard himself — “I didn’t have time to hire someone to design anything special” — and had it going by Sunday night, in time for the Monday morning commute, visible to drivers in either direction.

He took a picture of the billboard and shared it with his few followers on his company’s Instagram and Twitter accounts (both @judgeout) and let it be.

“I figured a few people would see it,” he said.

And then, Politi helped him again.

Politi always has the best takes on New Jersey sports (full disclosure, we’re former colleagues). He can capture a moment as well as anyone (it’s why he repeatedly wins national awards). And there’s nothing he likes more than a funny line.

He instantly recognized Holloway’s quip after Saint Peter’s produced its second big upset — becoming just the third team in NCAA Tournament history to reach the Sweet 16 as a No. 15 seed.

“Shaheen’s quote was so perfect,” he told me. “When I heard it in the press conference, I laughed out loud.”

Politi didn’t think his own words would stir someone to action.

“I never imagined that somebody would actually read what I wrote and actually ‘slap it on a billboard,’” he said. “When I saw the photos, I thought it was a gag at first. But it’s perfect. I hope people are honking their horns when they drive past.”

In my Saint Peter’s column from yesterday, I wrote that someone should slap Shaheen Holloway’s quote about “guys from New Jersey and New York City” on a billboard. Well, today … https://t.co/nsQhZxxyYn pic.twitter.com/tgEfEk7t7R

Thanks to Politi, who tweeted the picture out with a ‘thank you’ to Judge’s company, the billboard is getting a lot more attention than just from drivers heading east and west on Route 4.

“When Politi put it out on social media, it immediately got a lot more attention,” Judge said. “I’ve heard from a lot of Saint Peter’s alums and some basketball people. But, really, it’s from a lot of Jersey people who just love the story.”

Judge, 53, has been in the billboard business his entire working life. He started his own company more than two decades ago, after working for a larger national company.

He has 10 billboards in New Jersey — mostly in Bergen and Hudson counties — and three in New York. He’s had billboards in other markets, but he prefers to keep them local. The reason: He doesn’t just sell advertising on billboards, he builds them.

It’s a tough grind. The billboard on Route 4 featuring the Saint Peter’s quote took five years to get accomplished, between permitting and permissions, he said.

The billboard features eight 8-second spots — most of which have been filled since it debuted, usually by local businesses. Holy Name frequently is there. And there’s often a lot of local restaurants and banks. National advertisers tend to come in during the summer, he said.

This week, the billboard happened to have three spots open, so he gave them all to Saint Peter’s, free of charge.

“We keep a few spots open to donate to the community,” he said. “That’s why you’ll see spots for a ‘Run for the Cure,’ and things like that.”

Judge said it was unusual to have three spots open. Business, he said, has been great. Has been for a while. And, while you might think a pandemic that kept everyone home and off the roads would have hurt him, Judge said it was just the opposite.

Judge has not heard from anyone at Saint Peter’s, and that’s fine with him.

“I’m in the billboard business,” he said. “I don’t want to be in the T-shirt business.”

Like so many others, Judge just wants to celebrate the little school that could.

Judge will be this weekend — even if he didn’t have Saint Peter’s advancing to the Sweet 16 in any of the dozen-or-so brackets he filled out.

Now, he’s hoping for the ultimate bracket buster — a trip by Saint Peter’s to the Final Four.

“That would be incredible,” he said.

It also would cause a dilemma. Judge may not necessarily have a spot for Saint Peter’s next week on Route 4.

“Don’t worry,” he said. “If that happens, I’ll make one. I’ll work out a deal with the other advertisers.”

He’s not worried about their reaction. After all, like the billboard says, this is Jersey.