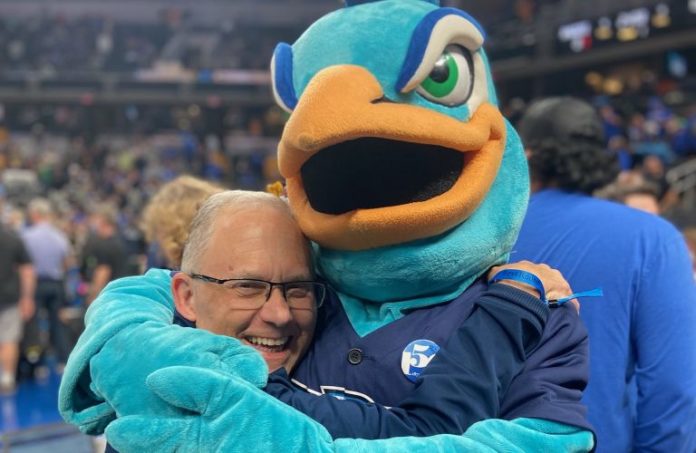 Eugene Cornacchia has heard all the funny-money numbers regarding how much Saint Peter University’s Cinderella run to the Sweet 16 will be worth to the Jersey City university.

Let’s be clear, he’s interested. But Cornacchia laughs at the guesstimations that have been going around.

This morning — as Cornacchia prepares to head down to Philadelphia to see his school play Purdue in the biggest basketball game (in the biggest week) in school history — he’s more interested in another number.

As of Wednesday afternoon, it stood at 90. That’s the number of applications the school has received this week alone — for next fall.

The national and local exposure the school has received this week has led to more than just merchandise sales (it keeps selling out) and alumni donations (they keep pouring in), but to the bottom line of what Cornacchia said is the school’s mission: to educate.

“We really didn’t expect any bump until next year, but we’re already seeing it,” he said. “And we’ve seen a spurt in attendance at this weekend’s open house, too. That will fill up.”

Cornacchia is a big sports fan. (He actually hurt his hand from cheering so much last week.) He’s also a big believer in how sports can elevate an entire school.

After Saint Peter’s defeated both Kentucky and Murray State last weekend in Indianapolis in the first two rounds of the NCAA Tournament, the school has been the talk of the state and the sports world. He’s enjoyed every moment. He awaits the transformation.

“We expect, based on what everybody’s telling me, that this is going to give us a big lift in terms of things such as enrollment and fundraising,” he said. “That lift will allow us to invest more in our athletic program, particularly our men’s basketball program.”

There is a limit, Cornacchia said.

“I’m a realist; it’s never going to be a situation where we’re going to be investing $10-15 million a year,” he said. “We hope it gives us enough to do more and do better. But I do think it’s so important in this process to not lose sight of our primary mission.

“These are student-athletes, and, so, our focus always has to be on the academic experience, which I acknowledge fully that athletics enhances. But they’re students and this is all about learning — learning in the classroom, outside the classroom, on the court and in life. I think that’s really what we’re about as an institution.”

Cornacchia, who has been mobbed with requests for a word all week, gave ROI-NJ a few minutes of his time Wednesday afternoon. Here’s a look at the conversation, edited for space and clarity.

ROI-NJ: Let’s start with the most basic of all questions: Tell us what this week has been like?

Eugene Cornacchia: It’s been surrealistic. It’s been like living in a dream. Since last Thursday (when the school stunned Kentucky in the opening round), it’s been one thing after another. The outpouring of attention, and, frankly, the love for the university that we’ve experienced, has been absolutely extraordinary.

ROI: Give us some examples of the most amazing experiences?

EC: It started in Indianapolis. When we got back to the hotel after the first game, we were greeted by Kentucky fans who saw the St. Peter’s emblem on our clothing — and they wanted to congratulate us on the great game we played. One of the fans was so excited, she said, ‘Can I take a picture with you?’ Can you imagine that?

Back here in Jersey City, it’s been absolutely amazing, as well. I went shopping downtown yesterday and not only were people coming up to me and congratulating me because they saw St. Peter’s on my clothing, I saw so many banners and signs on the front of restaurants, bars and stores.

You want more examples of things you would never expect? Right now, in Times Square, the Nasdaq has a big digital sign that says, ‘Go Peacocks. Congratulations.’ There’s a billboard company that’s giving us a free billboard. And, yesterday, I got an email from someone in Japan that I don’t know who just wanted to congratulate the school. It’s just been incredible.

The only thing hotter than the Saint Peter’s men’s basketball team is the tickets to see it play. The school was allotted 1,000 tickets to Friday’s game in Philadelphia — and sold them in 41 minutes (to students, alums and donors).

“We could have sold four or five times that,” President Eugene Cornacchia said.

Cornacchia said he wouldn’t miss it for anything.

“I don’t know where my seat is yet, but I will be there,” he said. “It’s going to be an extraordinary time, and I know there is going to be a huge alumni contingent down there.”

ROI: This is March Madness. There’s always a school that captures the fancy of the nation, whether it was Oral Roberts last year or Loyola of Chicago, Norfolk State, Florida Gulf Coast, George Mason, Hampton, Cleveland State or any other of the small schools in the past that still are living in the lore of their big moment. Did you ever wonder what it would be like to be that school?

EC: I’ll admit, I did always wonder. Was it a dream of mine? It was a dream of mine just to get past the first round. I remember in 2011, when a school I don’t want to mention right now beat us in the first round and dashed our hopes for going any further (it was Purdue; what a coincidence). That itself was a heady moment for us.

ROI: Some would say the stars aligned when you hired Shaheen Holloway as head coach four years ago. Talk about his leadership?

EC: He is a really good person who cares about his players. He cares about them, not just as basketball players, but as people. He has nurtured them. He has supported them. He has inspired them to go forward. And, frankly, they’ve got Jersey toughness, right? He’s said it more than once: They’re not afraid of anything.

A fellow Peacock steps up

When Peacock, the streaming service of NBC, found out Saint Peter’s didn’t have the funds to bring its cheerleaders and dance team to its first-round game against Kentucky, it stepped up — providing bus service to send the squads to Indianapolis for the second round.

Alexandra Shapiro, executive vice president, brand marketing and strategy, for Peacock, said it was its way to support its extended family.

“How could we not celebrate a team who shares our namesake,” she said. “Saint Peter’s historic run is nothing short of amazing, and they have earned their right to be on the big stage. We are just playing a supporting role in making sure they get the recognition they deserve.”

ROI: This week has been special, but let’s look ahead. It’s easy to say the victories are going to be worth X number of dollars in both exposure and actual money. But that doesn’t just happen. What are you doing to make sure you take full advantage of this?

EC: We have a really top-notch marketing arm and a top-notch communications arm within the university. It is going to be a joint effort to continue to project outward all the assets of the university — academics and athletics. We are on this already.

Some of it will happen organically. We’ve sold more merchandise than anyone could have imagined. We’re constantly running out. We were No. 1 last weekend on Amazon for collegiate merchandise, and the traffic on our website was so great that it actually crashed for a half-hour last week.

ROI: How much have the alums already stepped up?

EC: It’s been extraordinary. We keep putting out things to our alumni, soliciting their support for our athletic program and for the university as a whole, and they are responding. We have an extraordinarily dedicated alumni base here at the university, and they have been really generous to us.

Our last capital campaign was the largest in our history and helped us build a student center. (It raised more than $64 million.) The current capital campaign will probably be even larger than that when it’s done in a year or so.

Many have been inspired by the efforts of the Saint Peter’s basketball team. If it’s made you want to contribute to the private Jesuit school in Jersey City with an enrollment of approximately 2,400, click here.

ROI: Let’s look ahead, part II. The reality of college basketball is that you are mid-major school — which now employs one of the hottest coaching candidates in the country. Holloway played and coached down the road at Seton Hall, which now has a job opening. Everyone is convinced he’ll be there next year. I don’t want to put a damper on your week, but …

EC: All I can say about this — and I know this because Shaheen has been asked — is that he is focused solely on Friday, as we are. I don’t know what will happen at the end of the season, but whatever happens, Shaheen did what he promised to do, which is to build a good team and a solid foundation for men’s basketball here.

I will be forever grateful to him. It is my hope that he would stay, but, what will be, will be.

ROI: Of course, as long as Saint Peter’s keeps winning, that scenario will be put off. Give us your feeling for the rest of the tourney?

EC: I think we’re going to go all the way. I want to see a matchup between us and Gonzaga, the Jesuit schools, fighting it out.

EC: I know, but I’m glad we’re the underdog. I want to be the underdog. I think that really gets our team going. We’ve got a team that’s highly motivated, that is Jersey tough, that is going to play their hearts out.

Win or lose, they’re heroes to us.