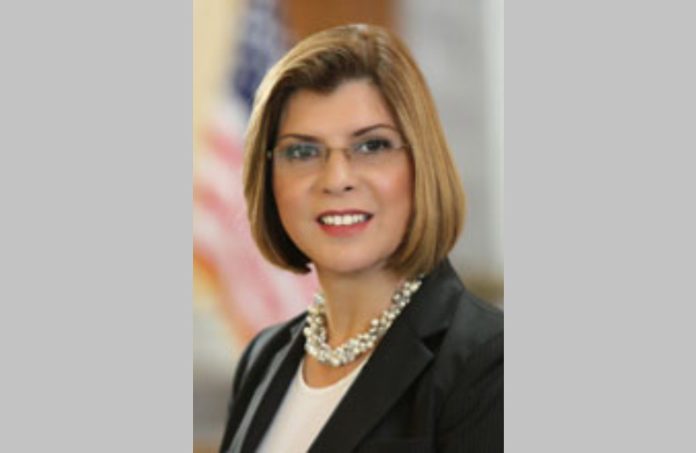 State Sen. Nellie Pou has been formally installed as the new president of the National Hispanic Caucus of State Legislators last weekend in Washington, D.C.

Pou (D-Paterson), who had been serving as president-elect, will serve a two-year term. She is the first person from New Jersey to serve in this role.

Pou, who serves as Majority Caucus chair as well as chair of the New Jersey Legislative Latino Caucus and chair of the Senate Commerce Committee, said she was humbled by the honor. And eager to bring her Jersey background to the role.

“As a legislator representing a richly diverse district in New Jersey, and as chair of our state Legislative Latino Caucus, I am proud to bring my experiences of service to a larger forum and to advocate for issues impacting the Latino community,” she said.

The organization, which was founded in 1989 as a nonpartisan nonprofit and spans 42 states as well as Puerto Rico, has more than 400 members. Its mission is to be the foremost organization serving and representing the interests of Hispanic state legislators from all states, commonwealths and territories of the U.S.

“The growth of the NHCSL itself is a testament to the increasing political engagement of Hispanics across the nation,” she said. “Even in the context of our diversity, we all share common concerns and pressing issues, and, by exchanging ideas, research and strategies, we are better able to meet these challenges and effectively serve all our constituents.”

The challenges are many, Pou said.

“Every one of our members is working hard to guarantee the fundamental human rights of their constituents, to ensure they have access to quality affordable health care, and that they have the opportunity to find fulfilling employment or to grow their own businesses,” she said. “As legislators, we must continue to explore ways to help these individuals and families.

“The NHCSL, with its nationwide influence, must continue to play a prominent role in addressing issues that affect the greater Latino community.”

Among her first duties was leading a leadership delegation to meet personally with Vice President Kamala Harris at the White House, speaking about Hispanic legislative priorities and joint action with President Joe Biden’s administration.

“Since 2006, I have had the privilege to serve with Sen. Pou in the Senate and know her to be a tough, thorough and conscientious legislator, a tireless advocate for her constituents — many of them products of Latino and immigrant neighborhoods — and a valued colleague,” Scutari said. “There is no doubt in my mind that Sen. Pou will bring this same work ethic to the NHCSL and prove an assertive and visionary leader who will carry forth her duties with honor and dignity.”

Pou was joined at the event Sunday by a number of members of the New Jersey Legislative Latino Caucus, as well as family and friends.

Murphy, in offer to Legislature, drops request for increase in sales...