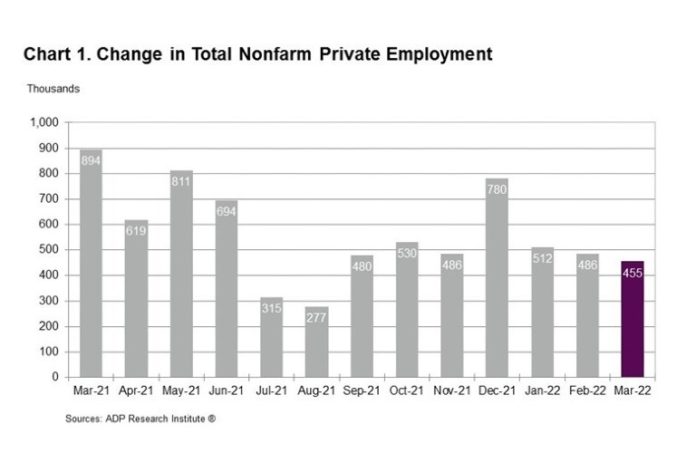 Private-sector employment increased by 455,000 jobs from February to March, according to the March ADP National Employment Report released on Wednesday.

According to the report, job growth was broad-based across all sectors for the month, contributing to the nearly 1.5 million jobs added for the first quarter in 2022.

“Businesses are hiring, specifically among the service providers, which had the most ground to make up due to early pandemic losses. However, a tight labor supply remains an obstacle for continued growth in consumer-facing industries,” Nela Richardson, chief economist for ADP, said.

Among industries, leisure and hospitality led the way, adding 161,000 positions. Education and health services added 72,000, professional and business services gained 61,000 jobs and manufacturing added 54,000 spots. Trade and transportation and utilities also increased by 49,000 positions, other services gained 21,000, construction added 15,000, financial activities 12,000, natural resources and mining, 9,000, and there was no change in the information sector.