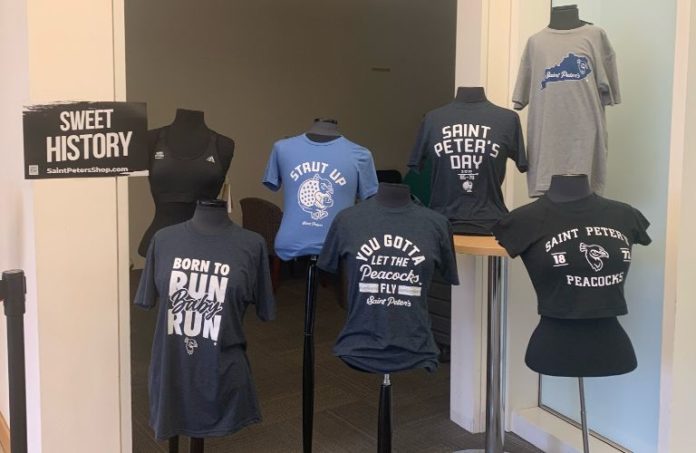 Minutes after Saint Peter’s stunned Purdue in their Sweet 16 matchup last week in Philadelphia, Erin McCann was on the phone with a vendor, giving the go-ahead on 1,000 T-shirts celebrating the men’s basketball team’s trip to the Elite Eight.

She only had one concern: How soon could they get them to campus?

Selling them all? That wasn’t a worry. If McCann has learned anything during the school’s Cinderella run during the NCAA Tournament, it’s this: You can’t have enough merchandise.

“As soon as we get it, it’s gone,” she said. “It started after we beat Kentucky. The next morning, people bought everything we had that had a ‘SP’ on it.”

The school was eliminated from the tournament last Sunday, but the interest hasn’t slowed down. In fact, another 1,000 shirts came Thursday, just in time for Friday morning’s parade in Jersey City.

The school has purchased additional card readers, so it will be able to sell more shirts (for $30 apiece) on the parade route. McCann knows it will need them.

“We want everyone who wants a shirt to be able to get one,” she said.

McCann, who handles merchandising under her role as vice president of student life and development, said apparel sales have been unlike anything she’s ever seen.

Incredible when you consider the school only has approximately 2,100 students.

Incredible when you consider the school sold only $20,000 worth of merchandise during the entire first semester.

And even more incredible when you consider this: Saint Peter’s doesn’t have an on-campus bookstore. That closed — or, rather, it went virtual — last year. The school was in the process of turning the area into a convenience area with a juice bar, coffee bar, mini-mart and, yes, a spirit shop, when the NCAA Tournament began.

Here’s the incredible thing about the selling of Saint Peter’s swag: It’s happening at a lot more places than just on campus.

On March 19 — two days after the stunning win over Kentucky and the day of the Peacocks’ second-round game with Murray State — Saint Peter’s was a Top 25,000 search term on Amazon, a ranking more associated with Alabama football.

Trevco, a top vendor on Amazon, told the school it sold more than $40,000 worth of shirts — orders that came in from 45 states.

Then, there was the local interest.

Brian Kulbacki, the owner of Departed Soles Brewery, said he sold more than 200 T-shirts that featured the label he used on his Busted Bracket beer.

Morlees, a second-generation family-owned shop on Grove Street, about a mile from campus, is doing even better.

Robyn Grodner-Garland, who now runs the store her father and uncle started in 1957, knew she wanted to get involved after the first weekend. So, she made a storefront display. But she wanted to do more.

So, as someone trained as a lawyer, she worked with the school to get approval to use its branding, logo, coloring — the works.

She then worked with a local designer and former employee, Juan “Cheese” Vasquez, to create two shirts that have been selling since the minute they arrived.

Grodner-Garland said approximately 1,000 shirts (at $35 apiece) have been sold — and she figures she’ll move another 200 more during the parade day.

“It’s great for our store, but it’s really great for Saint Peter’s,” she said. “We just wanted to show our support. It then went to T-shirts, but we’re working with them every step of the way.

“This is literally a labor of love. We’re not a big shop; we feel fortunate we can do this.”

Those who can’t get to Jersey City will undoubtedly do what so many others have done: Find the store on Instagram.

“People just keep DMing us — and we tell them how to get the shirts,” she said.

So, what’s been the craziest order?

McCann talks about people coming in buying as many as 50 shirts, the outreach from alums all over the country, the call she got from China — and all the people who come in off the street that seemingly had no idea the school was even there until a few weeks ago.

But her favorite story came during a recent open house weekend.

Looking for a shirt?

Can’t get to Jersey City, but want to support Saint Peter’s? Here are a few sites the school recommends:

“We literally had a woman on the phone taking orders from people back home,” she said.

And, while Friday’s parade should serve as a close to the incredible run of sales from the tournament, McCann knows the interest will remain. She’s starting to make plans for the future.

The school has had 12 different shirts during the tournament, but some of those — especially those tied to advancing to a specific game — will be phased out.

One, however, will remain: The shirt that celebrates the fact that the monumental upset of Kentucky came on St. Patrick’s Day.

“The shirts we have that says Saint Peter’s Day — I can tell that’s going to be our biggest seller,” she said.

And in adult medium, too. If you think a bigger size would sell better in our supersized world, you’d be wrong.

“I’ve done enough T-shirt events to know that you can never have enough mediums,” she said.

McCann figures the renovation of the area will begin again in a couple of weeks. It may need a new design — one with a little more room for the spirit shop.

“It used to be, when you walked around campus, you only saw a few people wearing Saint Peter’s apparel — and they were mainly athletes,” she said. “Now, everyone is wearing it.

“That’s been one of the great parts of all this: School spirit has never been higher.”