Home Opinion Editor's Desk Marketing the moment: The story behind those Saint Peter’s ads during the...
Facebook
Twitter
Linkedin 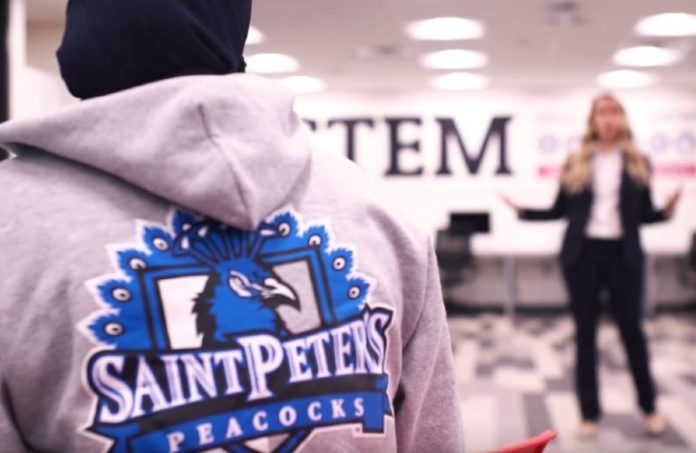 Seconds after there was a TV ad selling championship swag for the new NCAA champion — and seconds before an ad promoting the upcoming Nickelodeon Kids’ Choice Awards — that small school from Jersey City made sure it took in one more moment of March Madness.

That’s right: There was an ad for Saint Peter’s University on TBS and TNT.

Yes, the school’s Cinderella run in the tournament ended one game shy of the Final Four, but the school wasn’t about to let the momentum from the run be slowed.

That’s why an ad for the school, put together in one day — the day after the school stunned Kentucky on March 17 — ran throughout Final Four weekend, just as it had the weekend before.

Mark Gregorio, the executive director of marketing at the school, said the opportunity to do the last-minute ad was a marketing team’s dream scenario.

“When we were talking at 6 a.m., writing the script, our thought was: How do we capture lightning in a bottle?” he said. “How do we take this magical moment for Saint Peter’s University and bring our story to life so the entire world can see Saint Peter’s the same way we see Saint Peter’s?

“That was the inspiration and motivation to get it done.”

There was a bit of luck involved, too.

Like most schools, Saint Peter’s has a promotional ad ready to go. You can call it generic, or an ad that tries to give an overall look at the school. 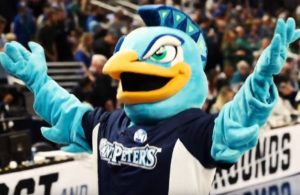 It’s meant as a marketing tool, something the university can send out through its social media channels and in its conversations with perspective students and donors. It’s not meant for the big time.

When Saint Peter’s won the Metro Atlantic Athletic Conference championship March 12, earning its first spot in the NCAA Tournament in more than a decade, Gregorio and his team decided to take advantage of the moment and buy a small package of local ads to be shown during the tournament.

The idea, Gregorio said, was to show it to the audience whenever a New Jersey school was playing — Rutgers University and Seton Hall University also advanced to the field — and make sure the Jersey fans realized there was a third school in the state in the field. The ad would be shown in the New York and Philadelphia TV markets only.

After the school beat Kentucky, Gregorio knew the school needed to step up its game.

Here’s where the luck came in.

Saint Peter’s just happened to be in the process of creating an ad that would be used for promotional purposes, appearing on the school’s YouTube channel. The eight- to 10-week process was scheduled to end with a final trip to a studio in Jersey City for a voiceover.

That trip was scheduled for March 18, the morning after the Kentucky game.

Like everyone else associated with the university, Gregorio and his team settled in to watch the Kentucky game. The school had been eliminated — easily — in its first three trips to the tournament. There was no reason to think this year would be anything but a one-and-done scenario. 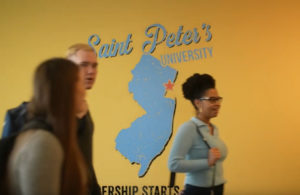 “So, we’re all watching the game,” Gregorio said. “And as it’s going on, we started thinking, ‘There’s a possibility something could happen here.’

Doing more meant more than rewriting the script. It meant putting together an entirely different ad. One that had more of the basketball team. One, in fact, that had footage from the Kentucky game. The original plan was to use one clip from a game against Iona earlier in the year.

Gregorio knew anything less would miss the mark. So, he worked with the network to get actual game footage. He had his production team turn the ad into something that showed how the team represented the spirit of the school. He was grateful they already had studio time booked — it helped him get the entire project finished in eight hours, in time to be shown that weekend.

Oh, and he bought more airtime.

“We originally were just going to do some local spots with the local teams,” he said. “After the Kentucky game, we picked up every ad spot that was still available.”

In all, that meant 230 spots on the cable networks and 10 spots on CBS.

Gregorio laughs when you ask him the cost.

Gregorio also will tell you this: It was worth every penny.

Relive some of Saint Peter’s run:

The school has been tracking all of the impressions it has received on social media since the Kentucky game — especially those coming from the hashtag #strutup. They are through the roof, he said. As is the number of followers of the accounts of both the basketball team and the school

It’s brand recognition and brand equity that is a marketer’s dream, Gregorio said.

“My primary goal was to create total brand awareness,” he said. “After the Kentucky game, people were saying, ‘We’re not sure who you are or where you are.’ We wanted to change that.

Of course, the ultimate goal is to increase awareness in the state. That effort will continue.

Gregorio said the school is planning to buy ads in local newspapers, thanking the students, alumni and businesses that got behind the team.

The newly cut promo will dominate Saint Peter’s promotional email campaigns for the next year.

“We’re talking everything that goes out,” he said. “Whether it’s to students or prospective students, alumni or potential done, there won’t be a day that will go by that we’re not leveraging this wonderful accomplishment by the men’s basketball team.”

Gregorio said he’s not worried about oversaturating the market. For now, he said, it’s wanted.

“The passion for the university, the passion for Jersey City, has totally been reignited,” he said. “Everyone knows that Jersey City is on the rise. Saint Peter’s has been a cornerstone in the city for 150 years. This excitement has solidified all the great things that are here in Jersey City, in Hudson County.”

Why Montclair-Bloomfield is more about mission than merger