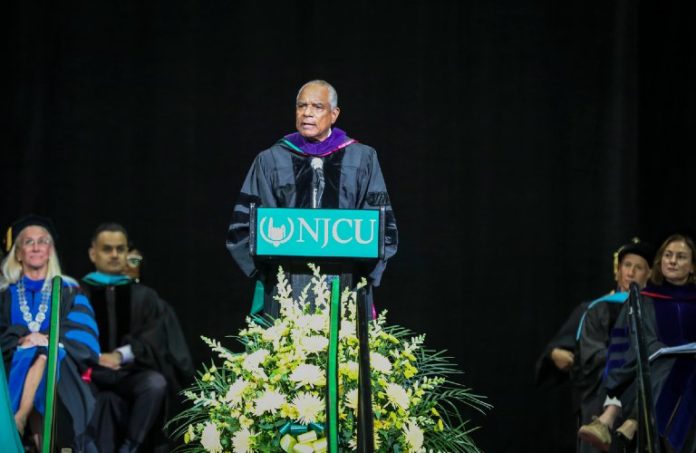 Kenneth Chenault, a former chairman and leader of American Express and a venture capital firm, and his wife, Kathryn Chenault, have gifted $100,000 to New Jersey City University to establish an endowed scholarship fund.

The gift is among the largest from an honorary degree recipient in the school’s history.

Chenault, the chairman and a managing director of the venture capital firm General Catalyst, and former chairman and CEO of American Express, was awarded an honorary doctorate on June 15, 2021, during NJCU’s commencement exercises that honored graduates from the classes of 2020 and 2021 during a fully in-person ceremony.

The annual scholarship, expected to first be awarded in 2023, will support the educational needs of a first-generation student who demonstrates both financial need and active participation and leadership in community service. First-generation students comprise 54% of the institution’s undergraduate population.

“Education is a pathway to success,” Chenault said. “Kathy and I are thrilled to establish a scholarship fund for students who are the first in their family to go to college.

NJCU President Sue Henderson said she was touched by the gesture.

“I am so grateful to the Chenaults for their generous support of our university and our longstanding mission as an institution dedicated to educating all the students who come to its doors,” she said. “A gift of this magnitude truly comes from the heart and will make a significant, lasting impact in the social mobility and lives of our first-generation college students.

“Their success is our success, and, today, I am proud to say the Chenaults have made a permanent investment in the future of those students.”

At General Catalyst, Chenault focuses on investing in fast-growing companies that have the potential to become large, fundamental institutions. He also provides invaluable guidance to portfolio companies, particularly to those with an eye towards global markets and responsible innovation, as they scale their teams and products. As chairman, Chenault leverages his renowned leadership abilities and experience to continue to evolve General Catalyst into a formidable and enduring firm.

Prior to joining General Catalyst, Chenault was chairman and CEO of American Express, a position he held from 2001 to 2018. He joined American Express in 1981 as director of strategic planning and served subsequently in a number of increasingly senior positions, including vice chairman and president and chief operating officer, until his appointment as CEO.

Under his leadership, American Express built one of the world’s largest customer loyalty programs — Membership Rewards — and earned global recognition as a leader in customer service. Upon Chenault’s retirement from American Express, he received high praise from Warren Buffett, the company’s largest shareholder.

“Ken’s been the gold standard for corporate leadership and the benchmark that I measure others against,” he said.

Ramapo gets $1M for recovery program