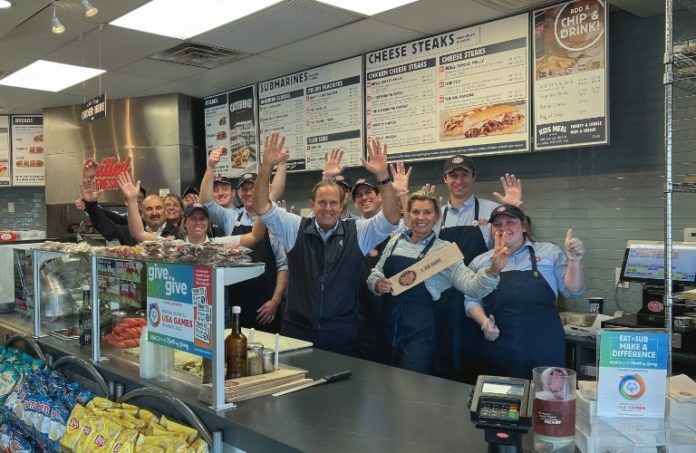 Jersey Mike’s Subs and customers across the country rallied to raise a record-breaking $20 million for the 2022 Special Olympics USA Games, which joined  forces with 108 Jersey Mike’s Subs locations throughout New Jersey for the company’s 12th annual March “Month of Giving” campaign.

During the month of March, Jersey Mike’s locations nationwide accepted donations, building to the company’s Day of Giving on March 30, when more than 2,000 restaurants donated 100% of sales, not just profits, to help local athletes across the U.S. attend the 2022 Special Olympics USA Games, to be held June 5-12 in Orlando, Florida.

“What an incredible and heartwarming day,” Caroline Jones, senior vice president, Jersey Mike’s Franchise Systems and daughter of founder Peter Cancro, said about the Day of Giving. “Our customers came out in droves buying subs to help our Special Olympics athletes. It created our biggest day of sales ever. Thank you to our customers, franchise owners, team members and Special Olympics family for making a difference!”

This fundraising total exceeds the $15 million raised during last year’s campaign. Since the Month of Giving began in 2011, Jersey Mike’s has raised more than $67 million for local charities.

“We are beyond humbled by the generosity of Jersey Mike’s and its customers,” said Joe Dzaluk, CEO and president, 2022 Special Olympics USA Games. “I was amazed at the energy and enthusiasm of the thousands of athletes, families and fans who visited Jersey Mike’s stores this month. We can’t wait for this June to display the grit, determination and bravery of our athletes.”

For more information about Jersey Mike’s Month of Giving, click here. For the total amount raised by state, click here.